Four leaks on the Nord Stream 1 and 2 pipelines that run between Russia and Germany have resulted in thousands of tonnes of natural gas – which is predominantly made up of methane – being expelled into the atmosphere. Sabotage is suspected, with reports suggesting underwater drones may have been used.

“It is the authorities’ assessment that we are dealing with deliberate actions. These are not accidents,” said Mette Frederiksen, the Danish prime minister. The leaks were detected in Danish and Swedish waters.

Both pipelines still contain gas under pressure, but are not delivering the fuel to Europe. Nord Stream 1 was taken offline by Vladmir Putin at the start of September, while Nord Stream 2 had not entered operation before the EU cancelled it because of Russia’s invasion of Ukraine.

The methane that is being released has a terrible impact on the climate: methane is a greenhouse gas 86 times more powerful than carbon dioxide over a 20-year period. Molecules then break down and the gas loses its potency, but this is little cause for comfort given that it is within the next 20 years that emissions must be brought under control if we are to avoid devastating climate change. 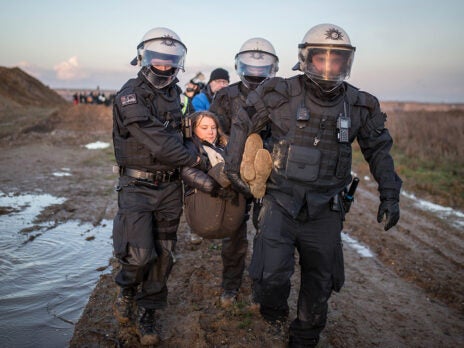 An estimated 0.3 million tonnes is expected to be released through the leaks, according to the German Environment Agency. Over a 20-year period this has a warming effect equivalent to 25.8 million tonnes of carbon dioxide, only a little below the overall carbon emissions released by Denmark in 2020.

“Speaking solely from a climate point of view, this is a disaster,” said Christopher Engberg Dahl, from the Swedish Society for Nature Conservation. “It’s becoming more and more obvious that we must stop investing in fossil fuels and its infrastructure. Renewable energy is both safer and more sustainable.”

[See also: Nearly half of UK offshore wind is owned by foreign governments]