This sombre report from 1914 describes the “listlessness and depression” in Paris as the city attempts to celebrate the first Christmas since the start of the First World War. The author, who signs as R.E.D, articulates the hardship of trying to celebrate when you are separated from loved ones and “you have no heart for merrymaking”. Festive traditions such as Réveillon, a traditional Christmas Eve feast, are lifelessly imitated; not “because it gives them any pleasure” but because “the habit is too strong to be abandoned”. The writer wonders whether the city can revel while the men on the front “are far away in the fighting line, in the trenches, or, perhaps, already under several feet of earth”.

Most people, I think, would have been glad if Christmas and New Year’s Day could have been blotted out of the calendar this year, or at least have been suspended as public holidays. A public holiday is a mockery in times like these, and the only effect of what is by definition a “festive season” is to make us more melancholy than ever. At least Paris has been more melancholy than ever these last few days. Listlessness and depression are the characteristics of the strollers on the boulevards – not the vast crowd of ordinary years when, on any evening from 23 to 31 December, the grand boulevard is almost impassable and the little booths that line the pavements on both sides are besieged by customers.

The booths are there this year, but they are not numerous enough to make a continuous line even on the favourite side, the left as one walks from the Madeleine towards the Place de la République, on which are nearly all the great cafés. Even on that side there are large gaps, and on the other, except for a small group near the Madeleine, the booths are few and far between. The hawkers, all women or elderly men, seem as listless and depressed as the rest; they make little or no effort to attract customers and sit waiting, without much hope, for the buyers who do not come. The young men who last year thrust their goods on the public by their eloquence, keeping up a continual patter, often really witty, about the merits of a novelty, are far away in the fighting line, in the trenches, or, perhaps, already under several feet of earth. So are the young men who treated their sweethearts to nougat or scent or tried their luck at petits chevaux at two sous a time. This year the girls wander sadly along in twos and threes, with no heart for the repartee that comes so readily to the lips of a Parisian, even if there were any sallies to reply to.

Since the war began I have never found Paris quite so depressing as it is this Christmas. Even the first fortnight of September, with all its strain and anxiety, was less melancholy. There was something inspiring in the sense of danger and something restful in the intense calm of the town. Paris faced the danger with such splendid courage that one could not feel depressed. The town is now much less quiet; there is more bustle in the streets, more people and more traffic, but the contrast with other years is painful. One can see that people walk down the boulevards just because they have always done so at Christmas time and the habit is too strong to be abandoned, not because it gives them any pleasure. They have no money to spend; what little they could spare has been spent on a present for someone at the Front. Only the soldiers have a right to étrennes this year; even the children of the people must go without the toy of happier years. A government allowance of seven shillings a week with two shillings and ninepence for each child leaves no margin for toys. 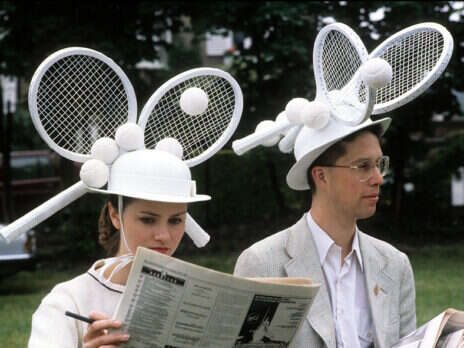 From the NS archive: Wimbledon the wacky

The booths that print visiting cards while you wait are deserted, for no visiting cards will be sent out this New Year. The hawkers have anticipated the situation; there are few novelties in the way of cheap mechanical toys, those delights of the grand boulevard at Christmas. The old ones reappear, but the man who wheels a barrow or what not is now dressed in uniform. It is true that there is a Turco who strikes the Kaiser’s head with a hammer and a Highlander who kicks a German soldier in front of him at every step, but those are about all the novelties. On the other hand, useful articles for soldiers take the place of useless trifles on many of the booths, but I fear that even these have not a large sale. It takes so long to get a parcel to the Front that the comforters, warm waistcoats, waterproofs, and the rest have been already sent off in the hope that they may arrive by New Year’s Day. The hawkers, who look to the profits of this fortnight on the grand boulevard to balance their budget for the year, will be as short as everyone else in 1915.

It was on Christmas Eve that the contrast was greatest. On the night of Réveillon half of Paris never goes to bed. The cafés and restaurants are open all night, and all crowded. On the ground boulevard the lights on the booths flare until the early hours of the morning, and the pavement are crowded half the night. Last Thursday one could have walked down the grand boulevard easily at any hour of the day or evening, whereas on an ordinary Christmas Eve it takes a quarter of an hour to move a hundred yards. The cafés closed at eight o’clock and the restaurants at ten o’clock; and the booths mostly shut up soon after the latter hour because it was useless to keep open. The only people out late were those returning from the Midnight Mass. No theatre gave a performance on Christmas Eve, at least in the evening; there were, I believe, a couple of matinees, but the Comédie Française was not open at all. This must be almost unprecedented in the history of Paris.

There is no precedent for it in 1870 when, although Paris at Christmastide was in the worst days of the siege, the theatres were open as usual, and the Comédie Française, in particular, gave a special gala performances. In 1870 the policy of the authorities was to keep up, as far as possible, the usual festivities; now it is just the contrary. From all accounts Paris was much less melancholy in 1870 then it is now, in spite of the terrible privation of the siege. People jokes about dining on rats, and were witty on the absence of fuel. “I am not made of wood”, said a guest at a New Year dinner party à propos of some experience that he was recounting: “Unfortunately not”, said the hostess, looking at the empty grate. The Parisians were still able to laugh while they starved and froze.

The difference is intelligible. If Parisians themselves were now suffering hardships they would be quite as capable of joking about them on occasion – and I imagine that they did not always joke about them even in 1870. After all, they joked about the bombs from the German aeroplanes. Paris as a whole is suffering no privations at present comparable with those of 1870. There are hundreds of thousands who can only just exist, and too many who have not even enough to eat; life is very hard for the masses of the people owing to the economic crisis caused by the war. But, while there is scarcity of money (much more than in 1870), there is no scarcity of supplies of any kind for those who have money to buy them.

The Parisians, however, who might be inclined to laugh and joke about their own hardships, are restrained from gaiety by the knowledge of the hardships of others. The thought of the men in the trenches rises up to stifle a laugh. Besides, if the character of the people of Paris has not changed since 1870, there has been, at least, a great change in their spirit. Anyone who rad the great Parisian dallies and took them to be representative of popular feeling here would suppose that France positively revels in the war and has never enjoyed herself quite so much. The papers in question tells us every day how glorious and beautiful and holy a thing war is, how it brings out every virtue (except among the Germans), how it has regenerated France and miraculously changed the French people. That is not, so far as I am able to judge, the feeling of the people of Paris. They still regard war as an appalling calamity, to be faced with courage and resolution, like any other calamity, since it cannot be avoided. And, that being so, they have no heart for merrymaking. They realise the horror of the war so profoundly that they do not wish to try to drown the thought of it in amusement.

Whether the policy of the authorities is quite wise is an open question, as I have said before. It may reasonably be argued that, since the people of Paris realise the war so profoundly, they have no need to be reminded of it by external signs of gloom such as the closing of cafés and the extinction of street lamps. An attempt to impose artificial sadness is perhaps as great a mistake as an attempt to work up artificial gaiety. But I am convinced that, even if the Réveillon had been allowed and permission had been given to cafés and restaurants to open all night as usual on Christmas Eve, there would have been very few Réveillonneurs. There is a general feeling that it would be indecent to spend the night in revelry, while the men at the Front are spending it in the trenches. I heard that the feeling expressed by the head waiter of a restaurant where I was dining the other evening with a friend. His opinion is certainly representative, for, if anyone is interested in keeping Réveillon supper are the largest in the year. I suppose that the tips at a Réveillon supper are the largest in the year. The sadness of this Christmas and New Year season in Paris, although it may possibly have been intensified by the regulations, is not, then, the result of them. It is natural and it does honour to the hearts of the people of Paris.

Read more from the NS archive here, and sign up to the weekly “From the archive” newsletter here. A selection of pieces spanning the New Statesman’s history has been published in “Statesmanship” (Weidenfeld & Nicolson).