This post originally appeared on our election site, May2015.com.

This week’s Ashcroft polls of Scottish constituencies confirmed what many recent Scotland-wide polls have implied: the SNP are set to win more than 50 seats in May.

In 2010 the party won just 6 seats. They have completely redrawn the UK’s political map.

That map has never seemed so divided. Politically, Britain is now five nations: the SNP are set to rule Scotland; Northern Ireland’s 18 seats are split between nationalist parties; Wales is dominated by Labour but a mix of parties hold seats in pockets across the principality; and England is split into two nations – Tory shires and Labour cities.

Here’s what our election-forecasting machine is predicting will happen in May.

Will Liz Truss’s U-turn on the 45p tax rate be enough to save her premiership? 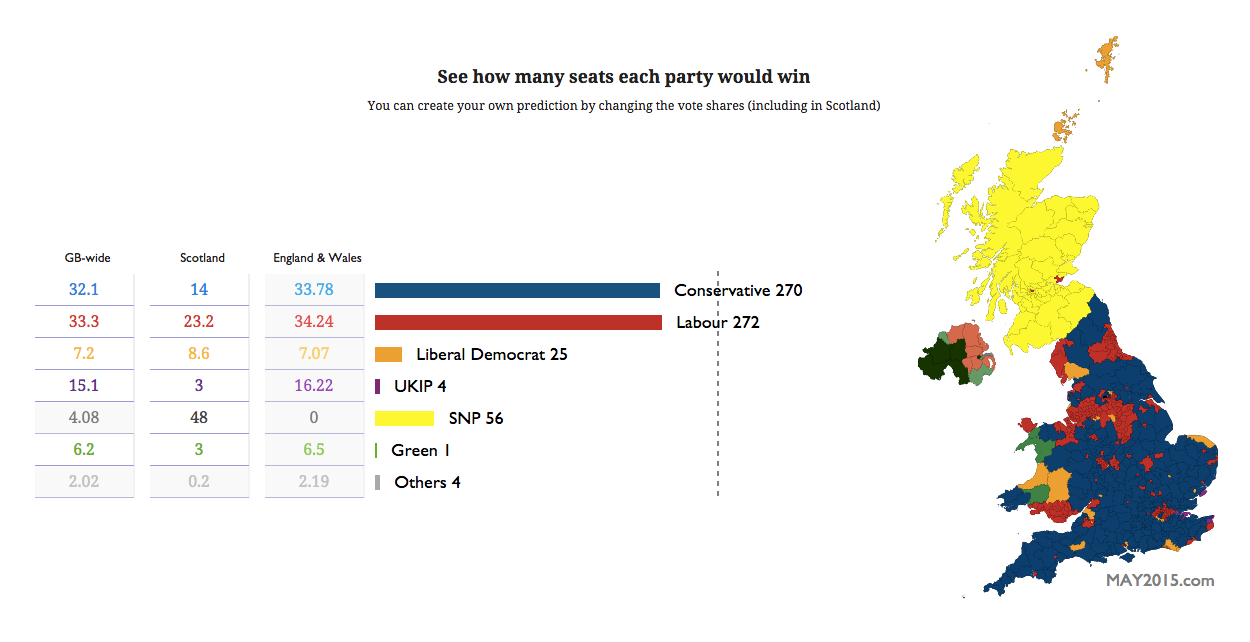 This is how that compares to 2010, when Westminster’s ruling parties mattered in Scotland, and Lib Dem orange was still sprayed across England. 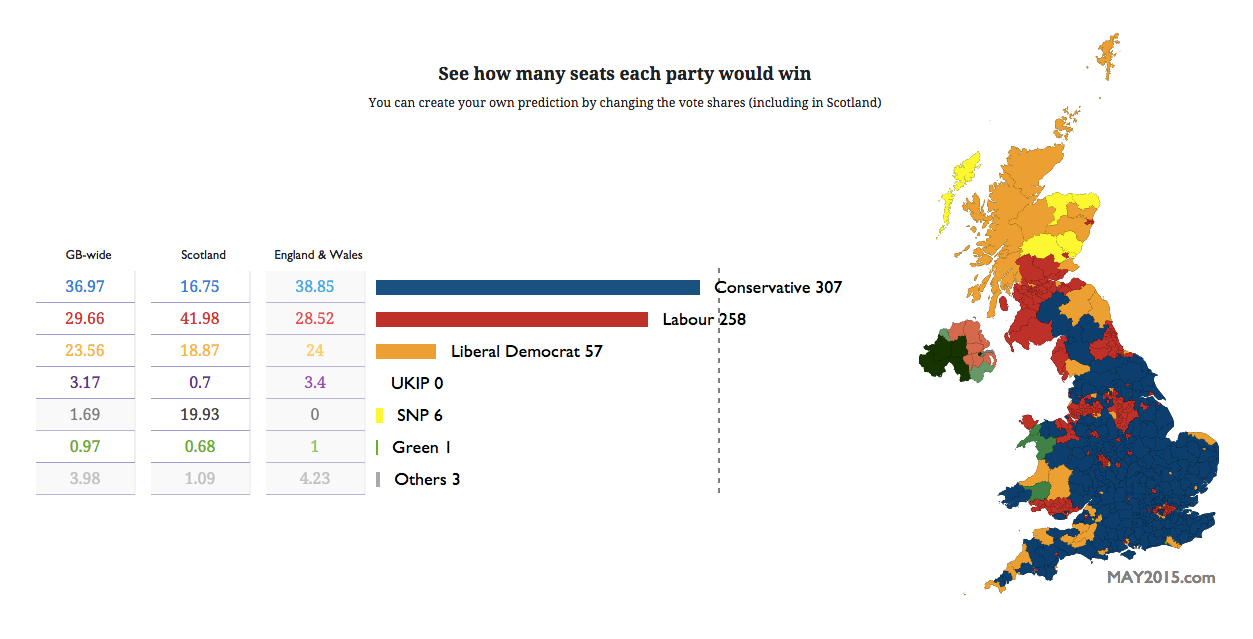 The UK is now more clearly divided than ever before.

The inroads made into urban areas by the Tories in the 1980s, or into Middle England by Labour in 1997, have been repaved as both parties lost the support they spent years winning over. Voters have retreated into familiar trenches: tightly packed urban seats vote Labour, and big, sparsely populated, shire seats go Tory.

38 of London’s 73 seats are held by Labour, when their national share of seats suggests they would only hold 29.

London is surrounded by seats of Tory blue.

But London is surrounded by seats of Tory blue. The Tories hold 52 of 58 seats in Eastern England, 75 of the 84 in the South East and 36 of 55 in the South West. That’s 163 seats out of 197 – or five out of every six. They also hold 31 out of 46 in the East Midlands, and 33 out of 59 in the West Midlands – with Labour’s 24 seats in the region all clustered around Birmingham-Wolverhampton and Stoke-on-Trent.

The industrial metropolis of the North West, centered around Liverpool and Manchester, is Labour land: they hold 47 of 75 seats. And they hold 25 in 29 in the North East, home to Newcastle, Middlesborough and Durham.

In the UK’s ninth region, Yorkshire and the Humber, the city/shire divide is most evident. Labour hold most of the seats, thanks to its grip on Leeds, Bradford and Sheffield, and have a lone outpost in York to the north-east. But the Tories hold all the wealthier and more sparsely populated seats around York and to the north of the region’s metropolitan south.

Labour hold two-thirds of Wales, but almost all of its MPs are in the south, in the many tiny seats around Cardiff and Swansea.

The Tories hold six big seats, in the north, centre and south-west. The Lib Dems hold two of Wales’ biggest and most central. And Plaid Cymru, Wales’ nationalists, hold a trio of large seats towards and along the Atlantic coast.

Along with Labour, who have the most MPs, the Lib Dems, Tories and Plaid Cymru all hold seats across Wales.

Many of these seats are marginals. Our election machine predicts Labour will come close, but fail, to win the Tories’ west coast seats of Preseli Pembrokeshire and Carmarthen West & Pembrokeshire South, while Aberconwy, to the north, is forecast to be one of the election’s closest marginals.

The Lib Dems are trying to hold off the Tories and nationalists in their pair of central seats, but are set to lose their Cardiff Central seat to Labour. As in England, Labour controls the cities, with the Lib Dems left focusing on its shire seats where the Tories generally reign.

These divides are familiar, but they have been made more stark by the detachment of Northern Ireland, and now Scotland, from Westminster’s ruling parties.

Our profile of Belfast East, the latest in our “650” series, will shortly be live on May2015, and be our first look at how the election is playing out in Northern Ireland.

But the country’s politics can be crudely summarised by the dominance of the Catholic nationalists Sinn Fein to the south-west and the resolute ascendancy of the DUP, the main Protestant loyalists, to the north-east.

Most relevantly, none of Britain’s political parties hold any Northern Irish seats, or even canvass in the country.

Nothing compares to the possible dominance of the SNP in Scotland.

Nothing compares to the possible dominance of the SNP in Scotland.

For the party to have more Scottish MPs than Labour have Welsh MPs they need to hold 39 of the country’s 59 seats. Nearly every election forecast now thinks that is likely, including ours and the bookies.

We have used the national swing implied by Ashcroft’s polls, which cover 26 per cent of Scotland’s voters, to suggest the SNP will win more than 50 Scottish seats. That is in-line with what many Scottish-wide polls published since the referendum have implied.

Even if the final result in Scotland is less dramatic, Scotland will be painted yellow on May 7. The UK has never been so divided, and it could look even more divided before the end of the decade.

Ukip, who are set to win nearly 5 million votes in May, barely register in our overview of the UK. (Neither do the Greens, who are on course to win 2 million.) But Lord Ashcroft’s 130 constituency polls suggest Ukip are likely to win 15-25 per cent in hundreds of seats in May, mainly in England.

The UK’s biggest nation is currently painted in blue and red. But by 2020, or under a more representative electoral system, it could be peppered with many pockets of purple.