Read this piece on our election site, May2015.com.

“Sun shines on savers”, “UK booming…Jobs at record high”, “The comeback king”, “End of tax on savings”. The four papers likely to back the Tories in May – the Mail, the Sun, the Times and the Telegraph – have delivered their verdict on the Budget, and they paint a pleasant picture.

But the headlines hide the most important, and least reassuring, fact in yesterday’s Budget: to eliminate the deficit, Osborne is going to cut spending more severely in the next two years than the coalition has in any year so far.

Here’s the key graph. It’s as trustworthy as they come. It was made by the Office for Budget Responsibility – an independent body that exists to analyse the public finances. 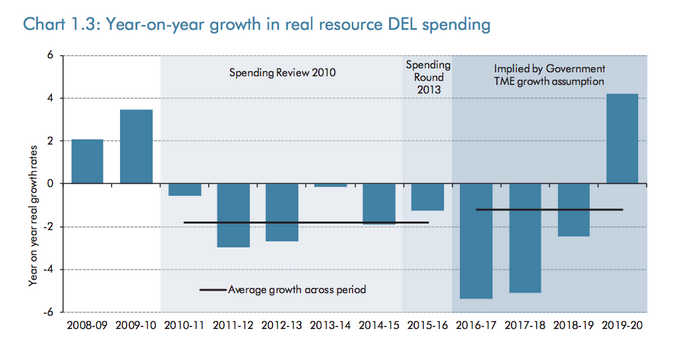 The cuts scheduled for next year are more than four times greater than the cuts Britain is facing over the next twelve months.

Next year’s cuts will be four times greater than those Britain is facing this year.

This is purely political. By cutting spending sharply at first, Osborne can deliver a final dose of medicine and then suddenly start spending just before the 2020 election.

There is no economic basis for this. As the FT put it, an “ever more annoyed” Robert Chote, chair of the OBR, tersely described Osborne’s plan as a “rollercoaster”. The Times, in contrast to their front-page, concurred, with a double page spread on how “Experts warn of a rollercoaster ride in row over public spending”.

Instead of this “bonkers” approach (the Guardian’s Patrick Wintour), Osborne could balance the cuts across all four years. The austerity in each year would be lower than the average over the past five years, and far more manageable for the services set to be slashed.

Government spending isn’t abstract. Osborne can’t just take a few pennies of one year, add them back in the next, and easily replace the services he’s crippled.