For more on the debates and the run-up to the general election, follow our new site: May2015.com. 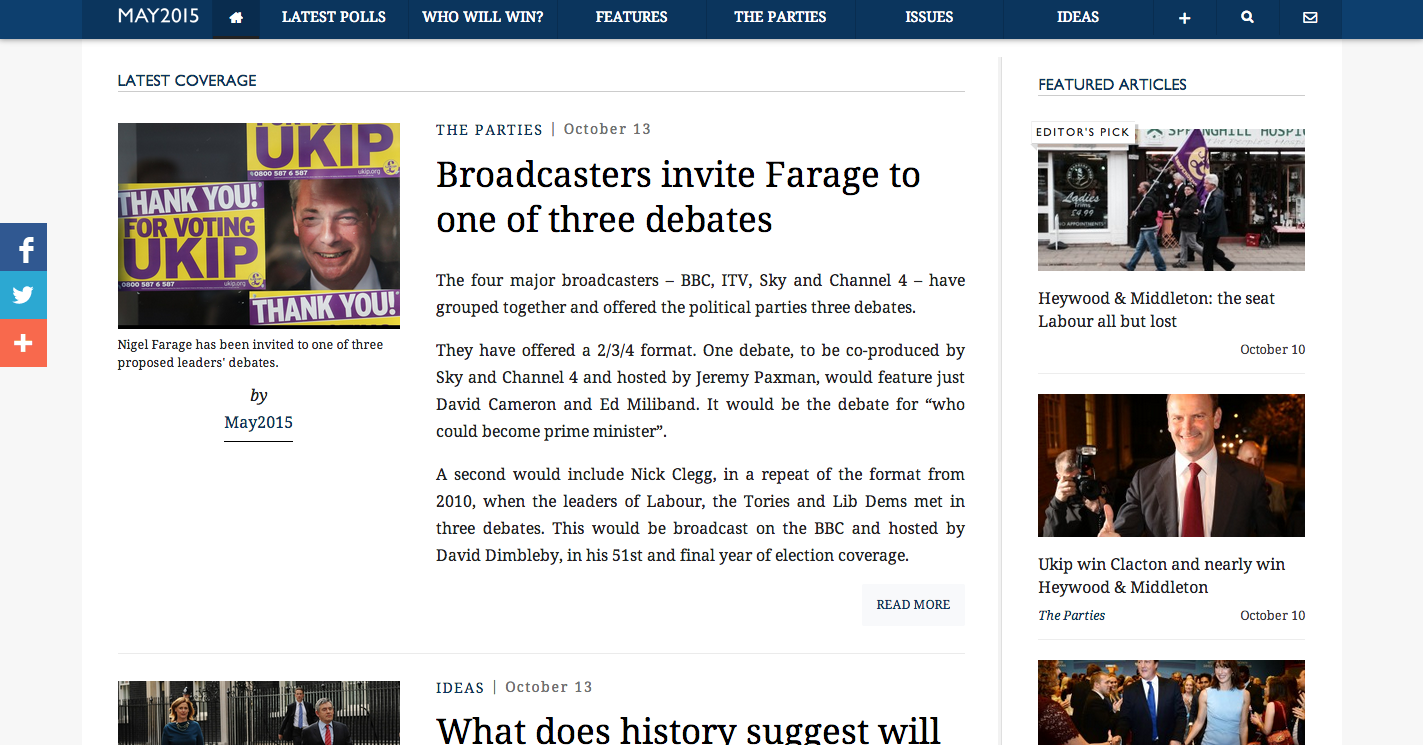 The four major broadcasters – BBC, ITV, Sky and Channel 4 – have grouped together and offered the political parties three debates.

They have offered a 2/3/4 format. One debate, to be co-produced by Sky and Channel 4 and hosted by Jeremy Paxman, would feature just David Cameron and Ed Miliband. It would be the debate for “who could become prime minister”.

A second would include Nick Clegg, in a repeat of the format from 2010, when the leaders of Labour, the Tories and Lib Dems met in three debates. This would be broadcast on the BBC and hosted by David Dimbleby, in his 51st and final year of election coverage.

The final, and likely most enthralling, debate would include Nigel Farage. It would be chaired by ITV’s Julie Etchingham.

The offer follows a joint proposal in May by the Guardian, Telegraph and YouTube for an online debate that could be carried on any media outlet.

The Lib Dems took 28 minutes to reject the proposals, arguing that Nick Clegg should be included in the “prime minister’s” debate, despite his party polling in the single digits and likely to be around 300 seats short of a majority in May 2015.

Nigel Farage provisionally accepted the terms, tweeting that the “Decision is better than it could have been”. But argued that “If [the] political landscape continues to change we would expect and ask for inclusion in a 2nd debate”.

The main party leaders are yet to react to the proposals, but many pundits think Cameron is willing to let the plans collapse. He has reportedly been advised by his chief strategist, Lynton Crosby, to avoid any debates.

He may be helped by the complaints of the Green party, who think their leader Natalie Bennett should be included in the four-party debate.

They may yet be invited, but they are many reasons why they shouldn’t be. People point to the polls, and suggest the Greens are as popular as the Lib Dems, but they aren’t. The Lib Dems are polling at around eight per cent, and have between eight and ten per cent throughout the year. The Greens are far more consistently at around five per cent.

For every two Green voters there are three Lib Dem supporters.

Perhaps more importantly, the party has one MP who they may lose, while the Lib Dems are still likely to have around 20-25 after May 2015. Finally, the Lib Dems are in government and are partly responsible for the Coalition. The Greens have almost no legislative history.

As for the current four-party debate, Ladbrokes have already made Farage the favourite to win the affair. He is 2/1 to come out on top, with Cameron second favourite on 5/2. Four years after comprehensively winning the leaders’ debates in 2010, Nick Clegg is 3/1.

It is unclear how Ed Miliband will react to the proposals.