The New Statesman is now Britain’s biggest political website – just in time for the title’s centenary.

The New Statesman, founded in 1913, was the first British periodical to go online – all the way back in 1995. In the last four years, since its relaunch, the website’s traffic has risen sharply. It increased 231 per cent between the fourth quarter of 2009 and the first quarter of 2012.

Since then, traffic has risen another 44 per cent, and in January the site recorded 1.15 million monthly unique users and 3.35 million page impressions.

This makes NewStatesman.com the country’s biggest political website, far outstripping rivals such as The Spectator (350,000 monthly unique users); Prospect; IainDale.com (which recorded around 250,000 monthly uniques in the heyday of its previous incarnation); Political Scrapbook, Labour List, Conservative Home and Guido Fawkes (which recorded 117,494 visitors in the week ending 2 February, compared with the New Statesman‘s 243,937 uniques). 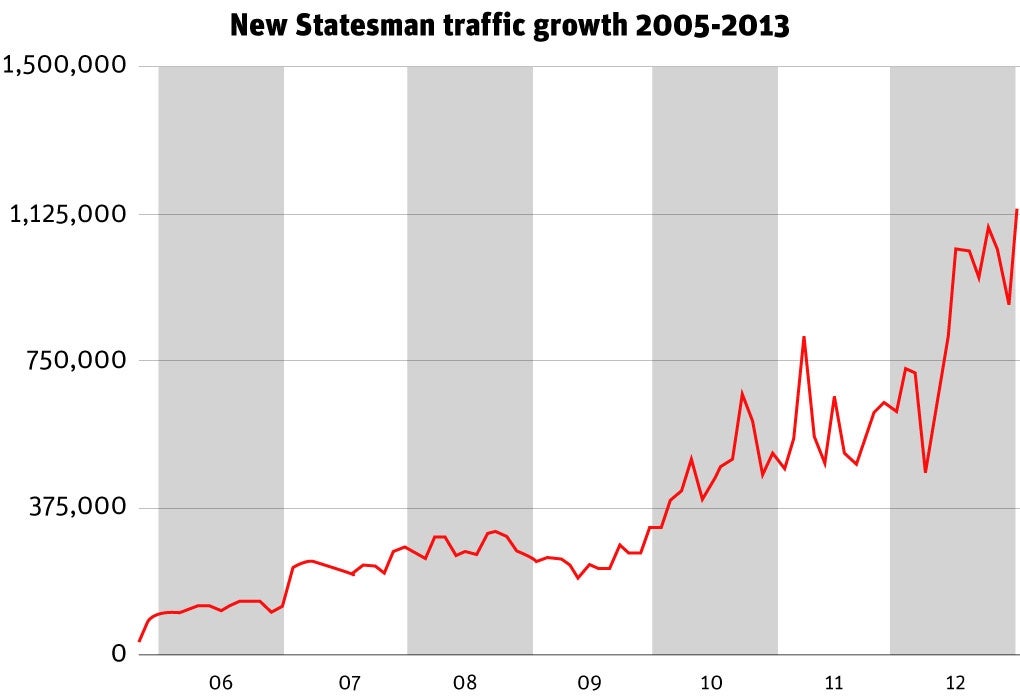 The New Statesman‘s traffic growth has been driven by online-only scoops such as George Galloway’s comments on rape and reporting such as Helen Lewis’s investigation of the online abuse of blogger Anita Sarkeesian (with her initial blogs on the subject each attracting more than 160,000 views).

Alongside the site’s core – the unmissable Staggers blog, edited by George Eaton – there are a range of distinctive voices writing regular blogs. The NS online mixes investigative reporting – such as David Allen Green’s coverage of Julian Assange and the Nightjack case, and Alan White’s series on outsourcing, The Shadow State – with witty, irreverent and incisive social commentary from writers such as The Vagenda, Alex Andreou and Glosswitch. The site has carved out its own online identity, which complements the print magazine but is distinct from it.

The New Statesman currently publishes all its magazine content online, free a week after print publication. Often, these pieces – such as Steven Poole’s essays on “neurobollocks” and “cyber-gurus“, or Jemima Khan’s piece on Wikileaks – attracted thousands of tweets, Facebook likes and other traffic through social networks such as StumbleUpon and Reddit. The New Statesman also recently launched a Tumblr page.