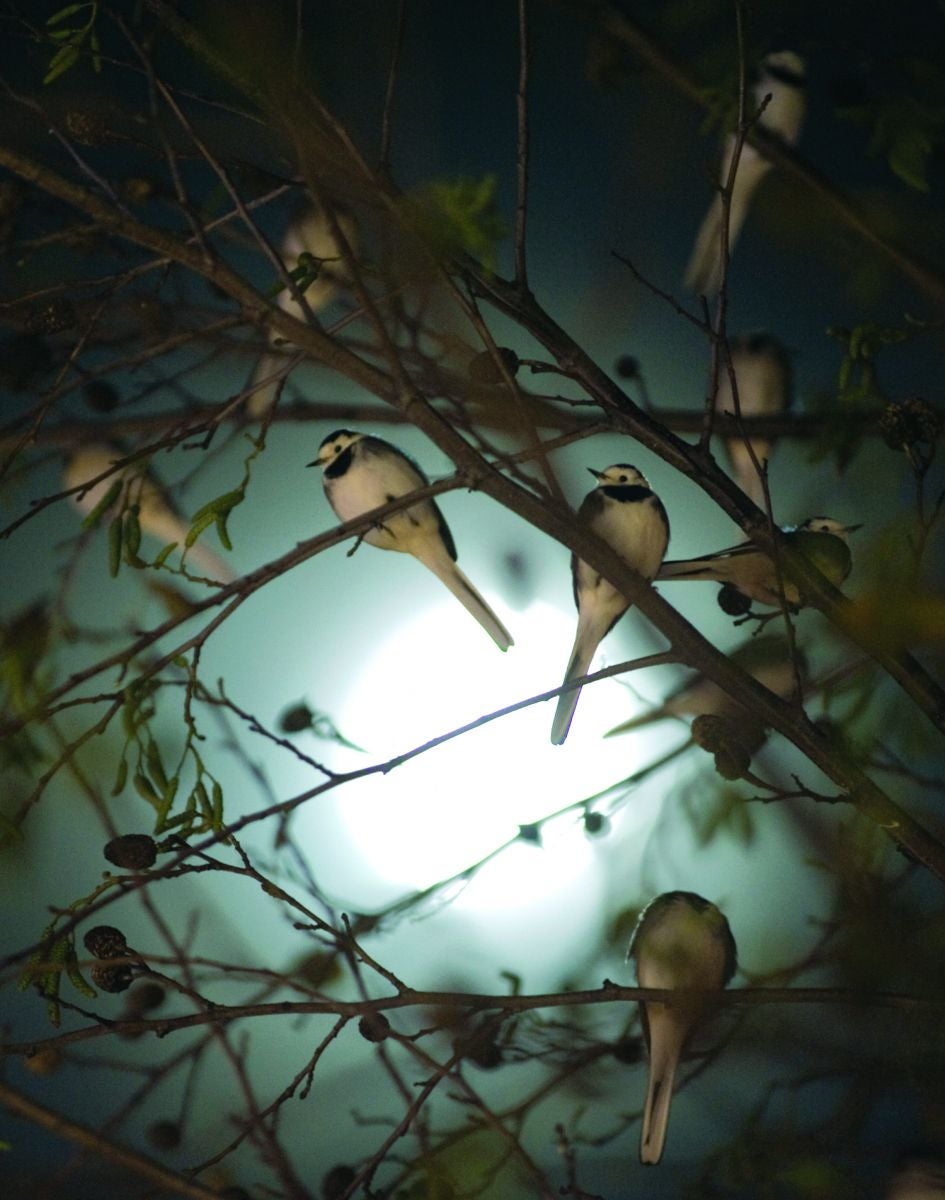 If ever a book was timely, it is this gorgeously produced 600-page compendium of ornith – ological facts, images, myths and narratives. Mark Cocker, whose marvellous Crow Country reshaped our rather prejudiced views on corvids, and the leading bird photo grapher David Tipling explore the many ways in which “people’s lives are entwined with, and are very often shaped by, their encounters with birds . . . how birds live within us – and how they have been, in the words of . . . Claude Lévi-Strauss, ‘good to think’ and to reflect upon”.

Yet, as much as this book is a celebration of birdlife, informed by that mixed sense of wonder and careful inquiry that Cocker has called “the poetry of fact”, it “inevitably contains many stories of our exploitation of birds, both in the past and in the present” – and sadly this is in large part what makes it topical. For although most of us no longer feast on parrots’ tongues or bathe in flamingo blood, as some Romans once did, millions of songbirds are still caught in mist nets, or on lime-sticks, all across the Mediterranean, while (to take just one example) over half the European population of northern lapwings has, in a single human generation, been lost to agricultural changes that not only degrade and pollute the land, but also produce inferior, polluted foodstuffs. As miraculous and varied as the lives of birds may seem (Cocker notes that “the entire class . . . has occupied more of the earth’s surface, on terra firma and at sea, than any other vertebrate life form”), their existence all too often becomes precarious when they are obliged to cohabit with people. It is hard not to despair when we read how, not so long ago, that consummate bird-lover W H Hudson claimed “to know English country estates where they killed nightingales because the celestial song kept the pheasants awake”.

Summer reflection: the silence of the seabirds

In northern Italy, the sound of the swirling river suffuses even my hotel room

Nothing illustrates this troubled relationship between birds and people as keenly as the recent controversy over the death-bywind- turbine of a white-throated needletail – a member of the swift family, not pictured here, but noted in passing as “one of the fastest animals on earth . . . recorded at 170kmph (106mph)”. Though badly sited horizontalaxis wind turbines are increasingly recognised as a significant threat to raptors and migratory birds in particular, this specific death was an environmental anomaly: the needletail, which normally breeds in China and Mongolia, was far from home and its death can only be accounted as an unhappy accident, irrelevant to the overall debate about the damage done to birds and bats by wind turbines. Nevertheless, it quickly became the focus of the unease many of us feel about our disregard for birdlife – and that unease deepened significantly after a comment piece in the Guardian by the RSPB’s “head of climate-change policy and campaigns” came across more as an apology for the wind industry than a reasoned defence of birds:

The fact is that the infrastructure that supports the kind of lives we have become accustomed to kills wildlife. Since 1980, we have lost 300 million birds from Europe’s farmland, victims of ever more intensive farming. Barn owls, suffering from a lack of suitable hunting grounds, can often be seen hunting alongside major roads; as a result, about 30 per cent of the species’ deaths are attributed to collisions with vehicles. Energy infrastructure in particular is a killer. One study compared the fatalities as a result of wind power with nuclear and fossil fuels. It looked at deaths across the full lifecycle, including extraction of raw materials and the impacts of any pollution it causes, and found that for every gigawatt-hour of electricity generated by wind power there are about 0.3 fatalities. For nuclear it was 0.4 and for fossil fuels it was 5.2 to 17 times greater than wind.

There is no attempt here to examine “the kind of lives we have become accustomed to”; it seems killing birds is what we do and there’s an end on’t.

For some of us, such reckoning of “acceptable” bird mortality sticks in the craw, no matter what the circumstances, but it is also worth pointing out that this rather blasé position on bird death rates sits uncomfortably with research done elsewhere (by the Spanish Ornithological Society, or by various groups in Scandinavia, the US and elsewhere). What that position does reflect, however, is the danger posed to birds not just by our appetites, or our supposed sporting instincts, but also by ideology. When recently I inquired at Friends of the Earth Scotland why they were so unconcerned about turbine-related bird (and bat) mortality rates in Scotland, I had this response:

That wind turbines pose a major threat to birds is a common misconception – in the US alone, it’s estimated that less than 40,000 birds [sic] (of all kinds) are killed by turbines each year, while up to one billion are killed by flying into windows . . . The same goes for bats, where numbers as [sic] negligible compared to bat deaths by other forms of human intervention. According to the American Wind Energy Association (AWEA), it’s not just pollution and habitat destruction. People accidentally waking bats from their daytime sleep kills [sic] far more bats than wind turbines ever could.

When I wrote back to suggest that, when it comes to the environmental damage done by wind turbines, taking the AWEA’s word for it (as both industry folks and faint-hearted greens have consistently done so far) was the equivalent of accepting the American Coal Council’s assertion that coal has “a strong environmental track record that continues to improve”, I received no response at all.

Yet, while this particular threat to birdlife continues to be shrouded in controversy (mainly, I suspect, because of disinformation spread by industry lobbyists and the kinds of lucrative “consultancy” deals that have been struck between some NGOs and energy companies), many others are common knowledge. The ill-regulated and excessive use of pesticides worldwide; the slaughter of eagles and other predators in rural areas (because, in the words of one mid-20th-century gamekeeper quoted here, “my job was to kill everything that His Lordship couldn’t eat”); and a range of other factors, such as deforestation and the recently documented mass destruction of grasslands to provide cheap biomass crops – these are all known.

Sadly, the overall numbers are huge: as Wallace P Erickson, Gregory D Johnson and David P Young noted in 2005: “We estimate that from 500 million to possibly over one billion birds are killed annually in the United States due to anthropogenic sources including collisions with human-made structures such as vehicles, buildings and windows, power lines, communication towers and wind turbines; electrocutions; oil spills and other contaminants; pesticides; cat predation; and commercial fishing by-catch.” Killing birds is, indeed, what we do.

In 1789, Gilbert White observed in The Natural History of Selborne that the parish in which he lived was “a very abrupt, uneven country, full of hills and woods, and therefore full of birds” – and there is ample evidence that such diverse and uneven terrain is as beneficent to the human spirit as it is to avian life. Today, we would be more likely to render “abrupt and uneven” as “diverse”, yet for all our apparent understanding of such concepts, our way of life, from the land we drive through on the morning commute to the food in our supermarket trolley, has been engineered to depend on the elimination of the abrupt and the uneven.

Still more in thrall to a Gradgrindian business ethic of efficiency and reductionism than we choose to admit, we may claim to be a bird-loving nation (the RSPB has around one million members). But when the abrupt and the uneven are under threat, too many of us forget the greater good that depends infinitely more on the birds and the bees than the supposed truths of hard economics or the paper prosperity of City traders. For that reason alone, reading The Natural History of Selborne in a post-Reaganomics world is a salutary reminder of this steady addition to our well-being.

It even comes across in White’s prose, as Richard Mabey points out in his biography of the parson-naturalist: “What is striking is the way Gilbert often arranges his sentence structure to echo the physical style of a bird’s flight. So ‘The white-throat uses odd jerks and gesticulations over the tops of hedges and bushes’; and ‘Woodpeckers fly volatu undosu, opening and closing their wings at every stroke, and so are always rising and falling in curves.’”

A similar spirit – that “poetry of fact” that renews and re-envisions the natural world – informs Birds and People, making it a worthy addition to the tradition of such writers as White and Hudson. Yet it also raises a question that haunts all eco-critical thinking today, the problem Tolstoy formulates as: “What then must we do?”

How do we even imagine a world where a book that avowedly “explores and celebrates” our relationship with birds need not refer so frequently to habitat loss, deforestation and various forms of direct persecution? For some time now, books and documentaries about the natural world have tended to flipflop between desperate warnings of present and impending losses on a catastrophic scale and informed celebration of what still remains of the wild; and the debate as to which of these approaches is the more successful will no doubt continue. However, it is clear that, to rediscover the abrupt and uneven in our parishes, we must begin by reawakening our imaginations from the slumber of reductionist economics – and on the evidence of Birds and People, it seems better that we err on the side of celebration. This comes out as much in Tipling’s extraordinary photographs as it does in Cocker’s prose. The haunting image (on page 496) of a “roost of white wagtails in a neon-lit city street” is a wonderfully persuasive instance of that celebration: the birds seem to subsist in light and the curious gaze the central pair turn back on the camera is strangely inclusive.

“We are all responsible for everything and everyone in the face of everybody,” says Dostoevsky, “and I more than the others.” Taking that declaration as a starting point, Emmanuel Levinas created a philosophy in which each of us is confronted with what he calls “the face” of the other, which both implores and challenges us not to do it harm, but to respond to it from a position that goes beyond mere respect, or even compassion – a position that, because it understands the necessity of the other to our own continued being, approaches the deeply unfashionable condition of reverence. That we can see reverence for birds as old-fashioned or sentimental is merely another indicator of our own outmoded thinking with regard to human success, a solipsistic mode of thinking that takes such absurd indicators as GDP or the Dow Jones as measures of prosperity.

As Cocker points out, “To assume that we alone are all that matter and to contemplate with any kind of equanimity the loss of these other species, or a part of them, is to risk losing our very souls and silencing our own imaginations.” Reading Birds and People, it becomes possible to see that a more imaginative economics (grounded, perhaps, on such indicators as Avian Health and Diversity, say, or a Dawn Chorus Audibility Index) could be built around Gilbert White’s abrupt and uneven parish, “full of hills and woods, and therefore full of birds”. We would all be the richer for that.

John Burnside’s most recent book is “Something Like Happy” (Jonathan Cape, £16.99)