It seems the great galleries and museums in London have been bitten by the shutterbug, with a noticeable tendency towards photographic exhibitions this season. The National Portrait Gallery recently exhibited Mario Testino’s portraits of the Royal Family, complemented by Marilyn Monroe’s portraits by Cecil Beaton. Ansel Adams’s photographs are currently on show at the National Maritime Museum in Greenwich, and the Victoria and Albert Museum has followed suit with two spectacular shows. As an avid amateur photographer, I couldn’t have been more excited to see “Light from the Middle East”, the V&A’s exhibition of contemporary Middle Eastern photography.

The Middle East is shining bright as a growing “hot spring” for contemporary art. Sotheby’s held its first ever auction highlights exhibition from its Doha sale, along with a charity auction in Saudi Arabia last month as part of its new arts initiative, Jeddah Art Week.Other art ventures, such as the Sharjah Biennial launched in 1993, Gulf Art Fair in 2007 and Abu Dhabi’s Saadiyat Island, home to Louvre and Guggenheim franchises opening in 2015 and 2017, has drawn increasing amounts of attention, commercial and otherwise, to the region. So the V&A show is highly relevant.

Light from the Middle East is the V&A’s spotlight on the response of contemporary Middle Eastern artists to the social and political challenges of the past 20 years. Scanning (and spanning) the region stretching from North Africa to Central Asia, curator Marta Weiss has selected 95 works that reflect a growing interest in the region’s photographic art as a distinct and often under-represented category. The majority of works exhibited are from a joint collection sponsored by ArtFund and built by the British Museum and the V&A. It features photographs by celebrated and emerging artists from the late 20th century to the present day.

Divided into three themes – “recording”, “reframing” and “resisting” – the exhibition presents itself as a project with two related aims. The first is to present a multi-faceted set of viewpoints on a region where the personal, social, religious, and political lives of its inhabitants are sites of friction. The second is to present an exploration of the medium. How do these artists employ different visual strategies to demonstrate the possibilities of the camera image today? The inclusion of photographs that use the camera as a tool for faithful documentations of people and places are juxtaposed with “staged reality” and images that had undergone obvious post-processing to subvert the authority of photographs and expose its limitations.

The same visual strategies and motivations were employed by German photographers during the 1950s and 1960s, as well as by photographers subjected to Stalin’s Socialist Realist agenda. Interestingly enough, one artist, Taysir Batniji, noted the influence of German Modernist artists Berndt and Hilla Bechers’s serialised photographs of old industrial buildings in his Israeli Watchtowers series. Nermine Hammam’s Upekkha series (pictured at the top) bears remarkable technical similarities to Stalinist Socialist Realist paintings, and Sots-Art paintings by Russian artist Boris Mikhailov.  Hammam’s works were based on the 2011 Arab spring where photographs of soldiers in Egypt’s Tahrir Square were re-coloured and placed within idyllic settings as a means to transport them away from the violent reality in which they previously stood.

It is quite fascinating to see how the presence of these techniques in Middle Eastern photographic practice has created a visual language for viewpoints on a variety of issues including: the conflict between tradition and modern consumer culture and censorship of media texts in the press.

Shadi Gharirian’s Qajar series manipulates the trope of portraits of Iranian women of the 19th Century Qajar period. Photographed against an architectural backdrop, the traditionally dressed sitters are pictured interacting with modern objects such as Pepsi cans, stereo systems, and sunglasses to compare and contrast ways of life for women then and now. 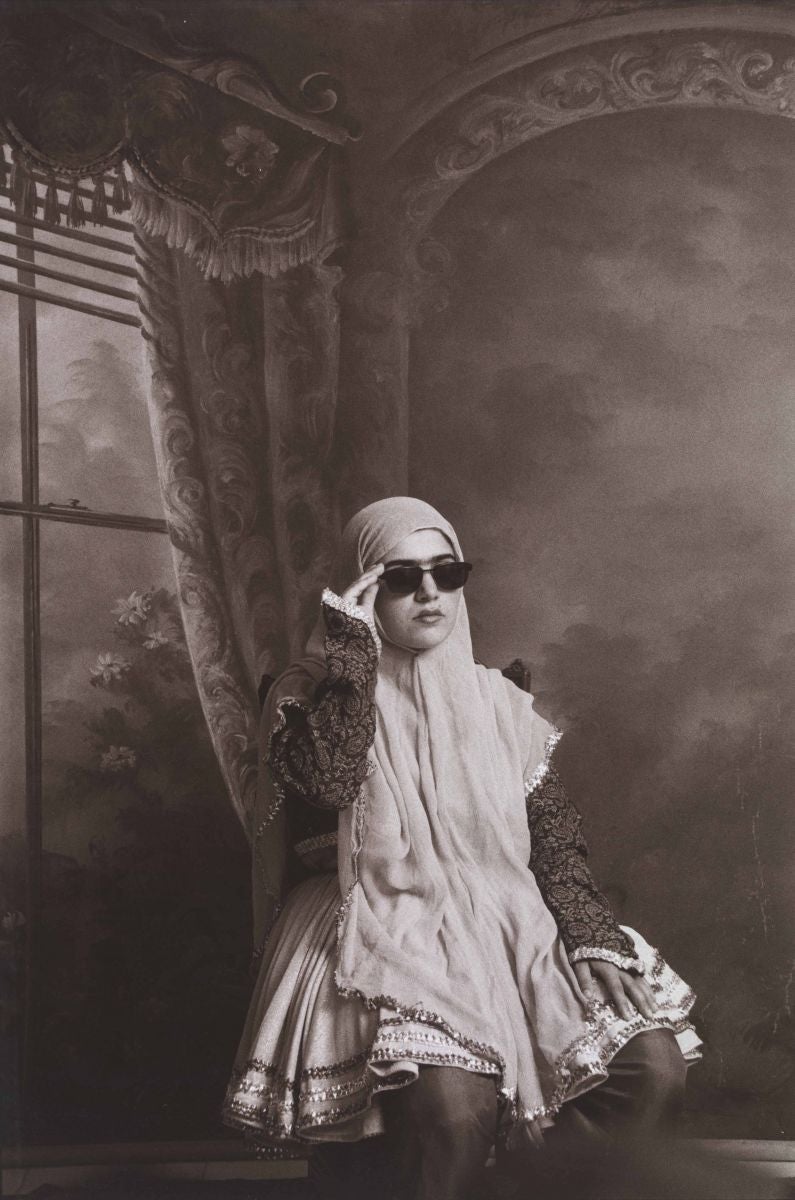 Light from the Middle East: New Photography runs until 7 April.