In 1994, the Conservative Government proposed a rise in fuel VAT from 8 per cent to 17.5 per cent. It was defeated by a Labour-backed motion and Shadow Chancellor Gordon Brown looked to have won a major economic battle. But Chancellor Ken Clarke made a stirring speech defending the economic fundamentals of the policy and accusing Labour of recklessly undermining the nation’s prosperity, culminating by calling Brown a “silly billy”.

Today, David Cameron made his own stirring speech, laying out his plan for how Britain could finally begin a recovery. But like Clarke before him, he wanted to defend his economic fundamentals from the Labour line, saying:

Those who argue we should spend more want us to borrow more, driving up our deficit and our debt and putting our hard-won credibility and low interest rates at risk.

The argument behind all this is, of course, whether the government is right to make deficit reduction “line one, clause one, part one” or whether a slower approach would make the economy grow faster, which would increase the size of the pie, allowing more debt to be paid off.

Despite losing public backing for their tackling of the economy as well as outspoken criticism from the economics profession – for example, Nobel Prize-winner Paul Krugman here – the government will not be fazed.

And it all rests on one argument:

Government bond yields are at an all-time low, which means the UK is seen as a safe place of investment and therefore the government’s plan is the right one. Economics professors across the Golden Triangle must squirm every time they hear another one of their protégés pull this one out on Question Time.

And that is because the low-bond-yield argument is a choreographed hoodwinking of the British public. To say that our rates are 1.85 per cent, compared to 6 per cent in Ireland, 12 per cent in Portugal and 28 per cent in Greece, is like saying that the PM picks up a tan quicker than an inmate of Her Majesty’s Prison Service. Yields reflect risk, and in those countries, there is real risk that the Governments will default on their debts. The same has never been said of the UK.

Instead the “risk premium” paid on gilts is based on the fact that we are a safe haven in a turbulent financial world and investors are willing to accept lower returns than normal because their risk in the UK is relatively lower than in the Eurozone. But this is not normal. Look up any economics textbook, it will tell you that the more global investors buy Government bonds, the more they are at risk (of losing money if the pound depreciates), therefore the higher the risk and the rate will be; in normal times bond yields are high the more of them are supplied to the private sector.

Indeed, as Jonathon Portes highlights here, confidence has grown in the UK at the start of 2012 (as measured by the rise in share prices of FTSE250 companies) and the bond-yield has risen alongside it. His graph is below: 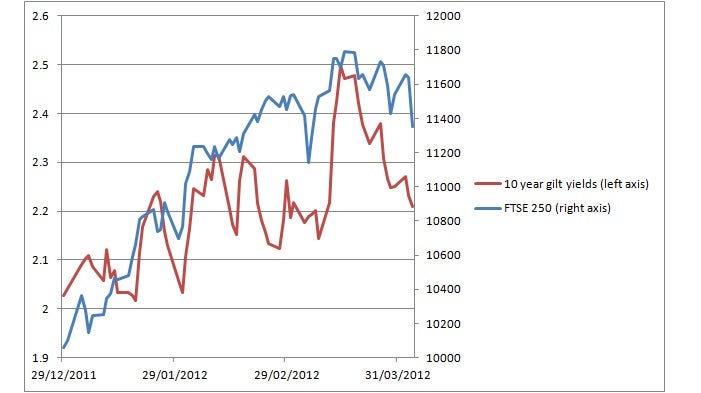 But what about the interest rates that the PM is so keen to keep down for the sake of struggling homeowners?

As an economy grows in confidence and bond yields rise, yes, eventually interest rates should rise too, so mortgage and loan repayments will increase. But surely this is to be expected in a healthy, growing economy, with increasing incomes?

Low interest rates are a symptom of the problem, not the solution.

This can be seen quite clearly in a country whose interest rates and bond yields have been rock bottom for over a decade: Japan. The charts below compare GDP (only up to 2007, to focus more clearly on growth trends before the recession), 10-year government bond yields and interest rates for the UK and Japan since 1992, when the Japanese economy sank into a recession from which it has never fully recovered. 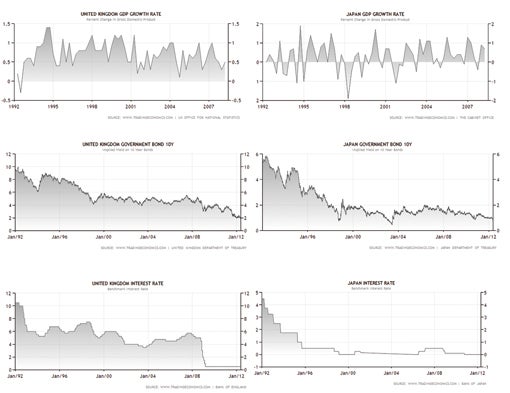 Indeed, Japanese homeowners are now accustomed to close-to-zero interest rates following a “lost decade”. Is that the ultimate aim of the UK Government’s austerity plan? If not, they might be forced before long to accept that Labour had it right all along. Silly billies.