The IMF’s growth forecast for the UK, which was revised upwards on 21 January, was met with relief, rather than joy: we have finally started to climb out of the worst slump in over 100 years. The Chancellor responded, saying that “Our long-term plan is delivering a brighter economic future.”

Really? Below is the UK’s real output per person since the crisis, compared with America. Whereas USGDP reached its pre-crisis peak in 2012, we don’t even show signs of reaching ours this decade. 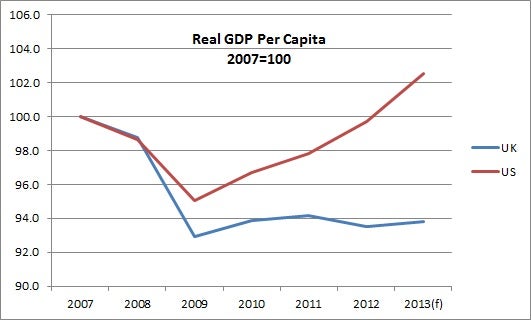 However, let’s assume that the growth figures forecast by the IMF result in real growth of 2.4 per cent and 2.8 per cent for the UK and US, respectively, in 2014. The picture would certainly be brighter, as shown below. 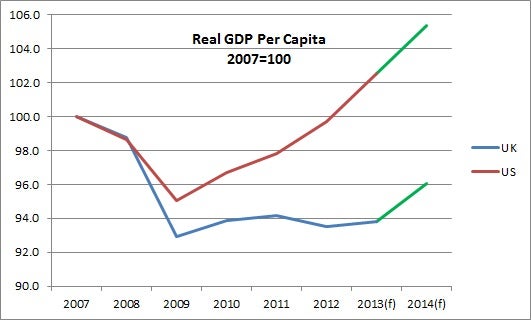 Source: Same as above and IMF growth figures used to project for 2014. (Population growth not taken into account)

Assuming growth continues at this rate (the IMF predict it to fall next year), we would be back to 2007 levels of GDP by 2016-17. The US economy would, by that stage, be 11 per cent larger than it was in 2007. This is as much a cause for celebration as the release of a prisoner who has spent a wasted decade behind bars.

But the reaction in the mainstream press is that this “success” vindicates the chancellor’s economics and, by proxy, ridicules the shadow chancellor’s. The Economist, this week, said that Labour had been “blasted on the economy” and mocked Ed Balls’s views, calling him a “Good Keynesian”. Clearly The Economist thinks that using fiscal stimulus in the aftermath of the Great Recession would have been folly.

Firstly, they are wrong. Nobody suggested that growth would never return with austerity – but we would surely have seen growth years sooner if the government had stimulated demand. (For comparison, America’s stimulus package was almost a trillion dollars).

Secondly, the upturn in growth we are seeing now may actually be the product of an unexpected bout of fiscal stimulus in 2012 by none other than George Osborne. (Don’t believe me? I didn’t at first either…)

I’ll deal with these two points in turn. First, the case for fiscal stimulus. Faced with the task of driving a car up a steep hill, few people would focus on saving fuel. Or as John Maynard Keynes put it: “The boom, not the slump, is the right time for austerity…” Now, to be fair, the forces that govern economies are not as well understood as the force of gravity on a car and, yes, economists are divided in many areas of macroeconomics – but the idea that you can create growth by imposing fiscal austerity on a recessionary economy is not one of those areas.

The graph below shows that those European countries who engaged in the most fiscal austerity over 2008-2012 had the biggest slumps. 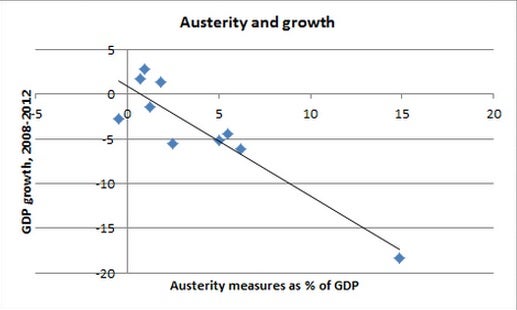 The idea that government belt-tightening during a recession causes a further contraction of GDP is as basic as it gets, but in post-2007 recessionary economies there was even more cause than usual to increase government spending. Firstly, normal monetary policy became impotent after we reached 0 per cent interest rates – and while quantitative easing has helped, its possible repercussions are not yet fully understood.

Secondly, multipliers have been shown (by the IMF, among others) to be higher when economies are depressed – so each pound spent by government generates more than just one pound of output – by some estimates, more than £2.50. Thirdly, and perhaps most importantly, countercyclical spending helps to maintain normal levels of output and therefore jobs: this not only decreases human misery, but it prevents the de-skilling of the labour force. In the long run this means higher employment and tax revenues, lower welfare and deficits, and a higher potential GDP.

As an aside, this is one of the biggest conundrums in right-wing economics: free-marketeers believe that growth is determined primarily by the supply side: so they want, for example, to cut red tape and taxes so that companies can more easily create jobs. But they are happy to watch unemployment rise and a substantial proportion of the labour market become deskilled and devalued – making those companies less able to find talent at home. And when those companies turn instead to foreign labour markets? “No! Send the immigrants home!”

But back to Mr Osborne. The government’s two main theories for shirking Economics 101 – that austerity could actually be expansionary and that debt over 90 per cent would cause investors to think of Britain as equivalent to Zimbabwe – have been proven beyond all reasonable doubt to be based on poppycock. Yet the coalition has remained firmly, publicly committed to austerity. As recently as November 2013, David Cameron told the CBI: “We have to continue with Plan A. We have to continue to reduce the deficit.”

Indeed, over the past three and a half years, every soundbite we have heard from the government would lead us to believe that Plan A has been motoring on ruthlessly through schools, councils and government departments, oblivious to any potential harm it might cause, like a sort of necessary Evil Kinevil. Not so.

Last summer, I wrote that fiscal austerity had so far been self-defeating as proven by the latest projections, which showed a budget deficit refusing to budge: 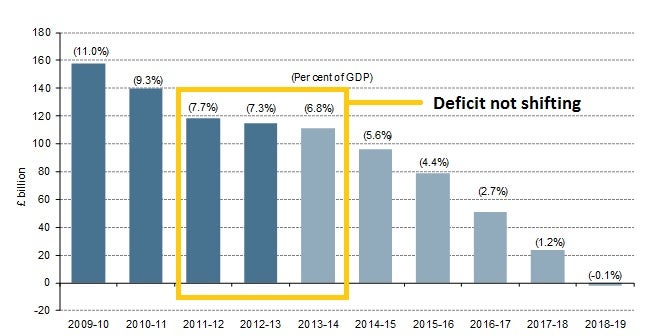 My reasoning at the time was that austerity was self-defeating via the automatic stabilisers route: cutting public services in a recession worsens unemployment, which means more people on benefits and lower total tax revenues – so the deficit balloons. This mechanism is even more pronounced when the private sector is engaging in massive hoarding and is unwilling to hire, as we have seen in the past few years

But by breaking down the deficit figures further, it is clear that something else has been going on. 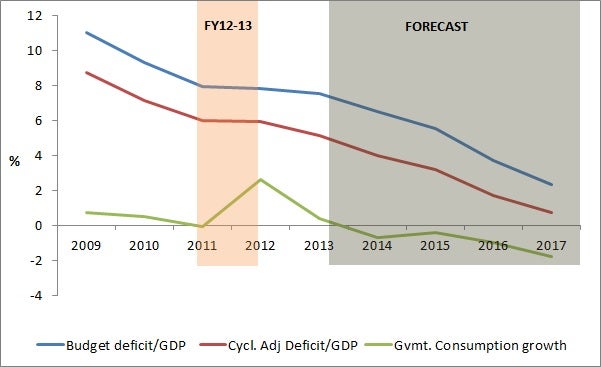 The top red and blue lines are the budget deficit as a percentage of GDP (normal and cyclically adjusted). It is clear that the pace of reduction stalled in 2012, slightly increased last year and is forecast to continue increasing slowly towards 0 per cent – but it is impossible to tell what is causing the reductions.

The green line at the bottom, however, is a measure of total government consumption of goods and services as a percentage of GDP. This measure strips out the “automatic stabilisers” – tax and transfers – and is, therefore, a better measure of discretionary government spending – it is, essentially, George Osborne’s signature.

For a chancellor committed to plan A this is a fairly sizeable deviation, but it is a deviation of his own making. And yet while this anomaly has been well documented in the economics blogosphere (see here, here or here), it simply hasn’t made it into the mainstream press.

If a football team won the Premier League on a small budget, they would be well praised. If it was then discovered that they had actually spent a fortune on the sly, it would be front page news.

Instead, we have the FT writing articles with titles such as “Osborne wins the battle on austerity” – and worse, polls showing that more people now think cuts are good, rather than bad for the economy.

To be fair, it is impossible to say for certain that the return of growth was due to a year of increased stimulus (though any basic economics text will tell you that fiscal stimulus takes about 12-18 months to kick in), but that doesn’t explain the strange fact that there was a year of stimulus under an outwardly parsimonious Chancellor. And it begs the question: does George Osborne believe in austerity or not?

If the plan was to create growth two years before an election, while outwardly claiming that this was the result of ongoing austerity under a wise economic custodian, then the political rationale is clear. But if that is the case, then George Osborne has tacitly acknowledged the effectiveness of fiscal stimulus to create growth.