The story is uncomfortably familiar. A young black man is shot by the police in the United States; the ensuing outrage sparks protests; clashes between police forces and protesters escalate an already tense situation. There are very few positive signs coming out of Ferguson, Missouri, in the current debacle following the shooting of the unarmed, 18 year-old Michael Brown on Saturday. However, alongside the hotly contested issues of racial dynamics in the country, one other talking-point has come to light: the militarisation of America’s police departments. It is a discussion that is long overdue.

The “city” of Ferguson has a population of just over 21,000 people. It is 6.20 square miles (16.06 sq km) in total area, making it the same size as the UK village of Dunsfold, in Surrey. The annual police budget accorded to this meagre area is $5.2m. It is no wonder that the police forces now facing down protests on the streets are armed with shortened assault rifles and use armoured personnel-carriers adorned with turret-mounted weaponry. In fact, huge police budgets have come in large part from grants given to them by the Department of Homeland Security. The US police have been arming and equipping themselves for years on a martial scale. 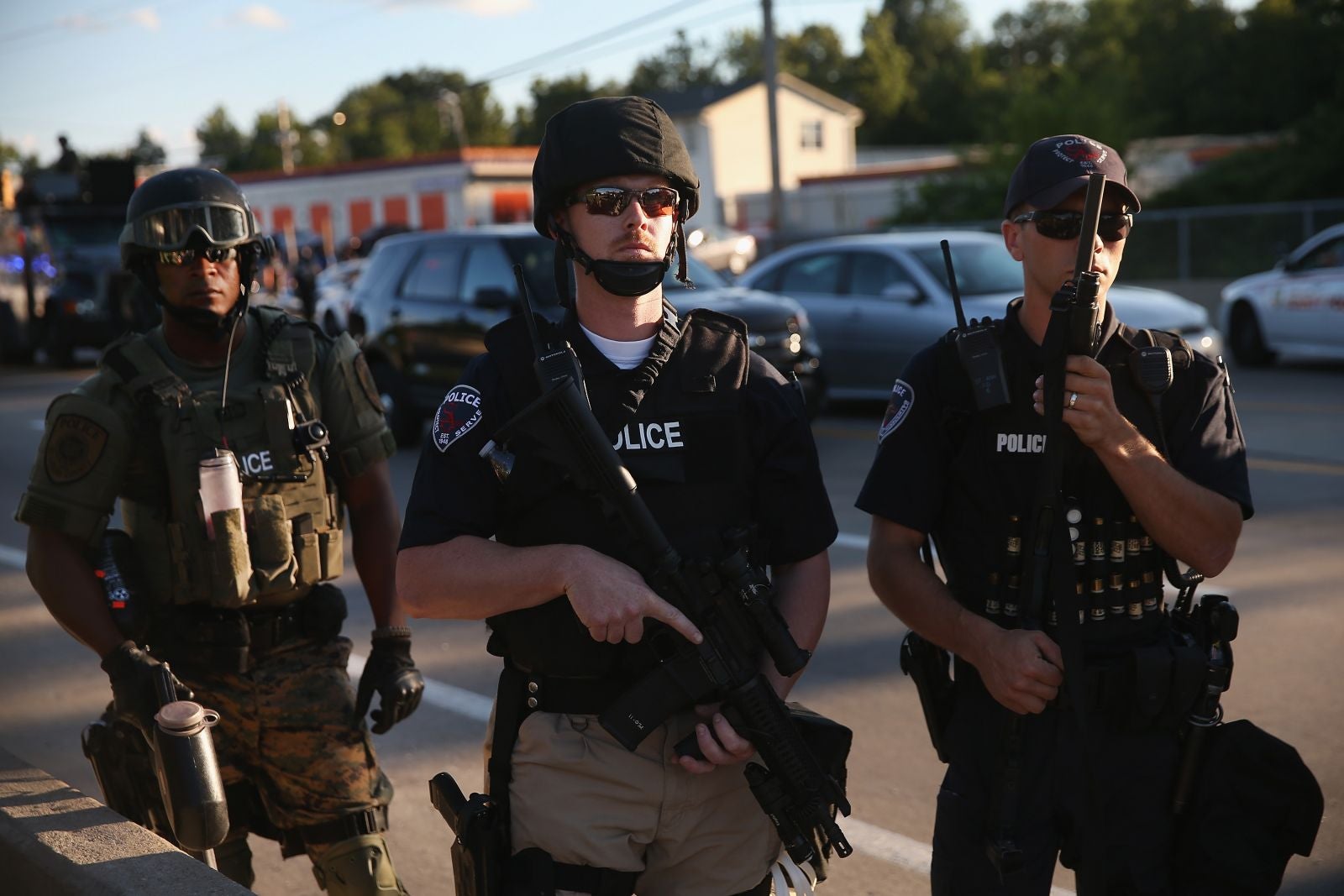 The issue has been pertinent since as far back as 1997, when Peter Kraska and Victor Kappeler of Eastern Kentucky University published their article “Militarising American Police: The Rise and Normalisation of Paramilitary Units”. In fact, the “drug war hysteria” of the 1980s was what initially gave American politicians the justification to roll out much of the military model that we are witnessing in action this week. The academics claimed that “some police paramilitary units proactively seek out and even manufacture highly dangerous situations,” instead of simply reacting to threat levels appropriately. Moreover, the units target whichever areas the police feel are likely to be “high crime or disorderly areas, which most often are poor neighbourhoods, whatever the city’s size”. This analysis may be 17 years old but presents a stark reflection of the realities Ferguson’s protestors are facing.

Notably large amounts of funding have been flowing into the police authorities’ coffers since the 9/11 terror attacks – the money given by Homeland Security comes in the form of “anti-terror grants”. Yet it is quite apparent that the problems the police are now facing in Missouri have nothing to do with terrorism. What has happened is that an obsession with curbing terrorism, mixed with the withdrawal of US armed forces from foreign excursions, has created a huge surplus of military-grade equipment that isn’t needed, but is nevertheless stockpiled by police departments. The “urban areas security initiative” plays a central role. Directing funding towards “high-threat, high density” areas like St Louis, Homeland Security claims that it should be used “to prepare for, prevent and respond to pre-operational activity and other crimes that are precursors and indicators of terrorist activity”. Though the police in Ferguson are engaging in none of the relevant anti-terror tasks, they have the equipment to suggest that they are. And since they have it, they might as well use it.

A candlelit vigil held on Sunday night suddenly turned sour when protestors chanting “no justice, no peace” were greeted by police officers with riot gear. Images of groups of peaceful protestors – mostly from the two-thirds majority of African-Americans in Ferguson’s population, represented by 3 out of 53 police officers in the city – being fired on with rubber bullets and tear gas have surfaced all over social media. This is the US police machine operating in its most intolerant and frankly dangerous manner.

Commentators in favour of the bellicose nature of the police often point to the violent nature of interactions between police and certain types of criminals. The justification for SWAT (Special Weapons and Tactics) teams is that the police need to be better armed than their targets so that police are less exposed to potentially fatal risk. This makes sense. But when a SWAT team conducts a dramatic raid based on a “no-knock” warrant, removing the need for them to announce themselves, the chances of a fatal confrontation are actually far more likely. This is totally undesirable if the criminals would not have been dangerous in the first place.

This point can be extended to the clashes in public places of the sort now being seen in Ferguson. When the police utilise such heavy-handed methodology, it comes as no surprise that protestors, whose original objection was to an inappropriate application of police force, will react with particular vehemence. Threat arises where there needn’t have been any. Furthermore, there is no reason why maintaining an efficient police department capable of dealing with serious threats – terrorism, hostage crises – means the response to wider, but mostly peaceful social problems cannot be toned down.

Sadly, if Ferguson serves as any example at all, it is one of heightened police aggression and militarisation in the US. As Radley Balko, author of Rise of the Warrior Cop, notes, “if you take a police officer and arm him like a soldier, dress him like a soldier and train him like a soldier… that is going to have an effect.” For Michael Brown and those mourning his loss, that effect has become all too real.