The influence of political doctrine on public life has been well covered in literature across the years. And yet Twilight of the Eastern Gods by Ismail Kadare – a pessimistic portrayal of the Soviet Union’s prohibition of literary creativity and pluralism – is notable for being deeply personal. Kadare, the widely respected Albanian novelist and poet, has remained under-appreciated in the English-speaking world due to the long absence of English translations of his works. We have David Bellos to thank for this new translation – published on 7 August by Canongate Books – of a book originally published in 1978, and only translated into French in 1981.

Critical international and political events are announced in passing, or under periodic reflection, granted less attention overall than the romantic and existential musings of a young man studying in a foreign city. But this personalised style grounds the author’s political points in his own thoughts, feelings and history. The novel is perhaps all the more interesting to read for this reason and is characteristic of Kadare’s writing.

The Canongate version is therefore a double translation, but, as Bellos has written, Kadare has never objected to this practice. Albania’s communist past meant that the country lacked copyright laws, and appalling translations of his novels – which could be obtained freely – surfaced from Albanian linguists. The French versions became the de facto resource abroad. The process of double translation has allowed his message, which “will come through in pretty much any language,” to reach millions of people who do not speak his native tongue. In Twilight of the Eastern Gods, that message remains pervasive and compelling.

Both the communist history of Kadare’s Albania and his time at the Gorky Institute for World Literature in Moscow have defined the writer’s worldview. The latter is the subject of this book. Kadare attended the Institute in his early twenties, and the novel is a semi-autobiographical memoir of his time there. At the Institute, he witnessed, and was demoralised by, the Soviet Union’s autocratic tendency to dictate the patterns of literature being produced in its halls. 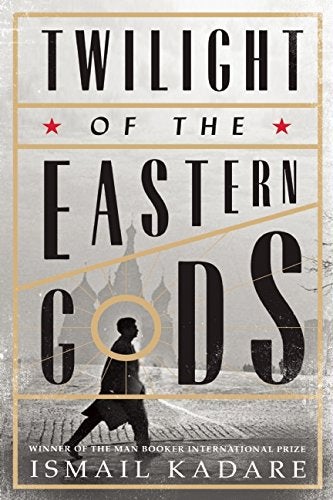 The mood is austere, and Kadare’s character seems unable to apply his mind fully to most of the events at hand, instead remaining disenchanted, often drunk or fatigued. How much of this is due to his lifestyle and how much a nod to the oppressive atmosphere is for the reader to decide. Russian dogma is persistent and near-pathological. Inane, pro-Soviet meetings and a girlfriend’s loudmouth, nationalist uncle are overshadowed by a quarantine scare following a case of smallpox. Kadare remains wholly underwhelmed by Soviet posturing. “Something unfinished, apathetic and undramatic,” strikes him about the Kremlin’s “squat, brick walls,” and his descriptions of Moscow educate us more on his personal sentiments than the geography of the city.

Nevertheless, the novel finds much to be celebrated about the joys of youth in the face of the surrounding greyness. Chiefly, he spends a lot of time describing and spending time with women. His treatment of those female characters who qualify for their own dialogue is offhand and a little contemptuous. He has no qualms over enjoying a flirtatious summer evening with a new acquaintance before returning, with a sense of entitlement, to his Russian girlfriend.

And yet Kadare seems to be sharing an ironic joke after the latter tells him “I don’t like writers. How fortunate you are not to be one of them.” The young narrator recognises a lack of sympathy for his literary, philosophical grievances mirrored elsewhere. He views romance as another dead end, believing the girls around him won’t have time for his writing or thoughts. He simply requires some kind of companionship; only later does he display affection.

Kadare as a literary figure is strongly associated with political and cultural ideology. He focused his efforts mostly on dissenting, albeit with subtlety, against the communist regime under Albanian First Secretary Enver Hoxha. Nevertheless, Kadare has been criticised by western critics keen to rebuke him for failing to criticise Hoxha strongly enough, and for instead writing “shameless paeans” to the regime. Twilight of the Eastern Gods has never suffered on this front. Its target was, nominally, the rule of Nikita Khrushchev rather than Stalin himself. Hoxha’s mostly unwavering devotion to the ideals of Stalinism and his subsequent decision to side with China against Moscow during inter-communist disputes led to tense relations with Russia during the era of “de-Stalinisation.” But the points Kadare makes are wide in their reach, and while his own government is never directly criticised, the madness of Socialist conformity applies to Albania retrospectively.

There is another defence to be made against Kadare’s critics. His works are thick with reference to Albanian folklore. Moreover, the shifting ground between near-historical fiction and the narrator’s subjective mythology, also included in his novel The Siege, takes a look at the cultural factors at play in an analysis of past events. A formula Kadare perfected throughout his writing career, these elements of his writing proved invaluable for a writer living under a dictatorship as draconian and bizarre as Hoxha’s. Writing oblique criticisms of Albania’s government during a career in its parliament, Kadare lived dangerously. Nina Sabolik has written that his failing, in the eyes of Western critics, is essentially that he “does not fit the world literature stereotype of, as James English describes it, a locally flavoured multicultural mélange.” Kadare contradicts the quintessential idea of the “anti-communist dissident as an outspoken, Solzhenitsyn-like figure who publishes his dissenting work against enormous odds, and then emigrates to the bright and happy west.” Eastern European writers do not need to meet this set of standards. Kadare’s work is engaging precisely because it deals with the subject so individualistically, rather than from an exiled perspective.

This exact point is encapsulated in Twilight of the Eastern Gods’ description of the furore in Moscow when Boris Pasternak wins the Nobel Prize. The author of Dr Zhivago faces a choice between declining the award and exile. Kadare reflects on the absurd reaction, in which “the brisling statements of Soviet literati were regurgitated by workers and farmers.” This is the scenario Kadare never faced in full. Perhaps he wished he did – maybe then he would be idolised in the west for his sacrifice.

The focus on Pasternak adds to the prevailing tone of alienation and the discomfort of feeling like an outsider without being able to speak out. Kadare’s character is a foreigner in a hostile land and a disenchanted writer in a city that abhors genuine, free writing. The strains in Russo-Albanian relations meant that he risked his colleagues at the Institute suspecting and rebuking him. The self-invented myth of his own death, told only to a deceived lover, defines his feeling of detachment from both life and location. The reinforcement of this lie through repeated reference to a legend from his homeland – featuring a character that returns from the grave to keep his word – renders the sensation more poignant still.

The plot remains under-developed and secondary characters drift in and out of focus without any significant time devoted to their description or clarification. Perhaps this is a weakness. But Twilight of the Eastern Gods presents an absorbing microcosm of Kadare’s psychological resistance against communism. The keenness, and universality, of Kadare’s troubles lend the book its strengths.