Lebanon lives in a tricky neighbourhood. Wedged between Israel to its South and Syria to its East, its people have long found themselves at the mercy of the region’s internal dynamics.

Surprisingly, it has so far managed to evade the rising wave of civil unrest that has consumed the Middle East. Lebanon had become an citadel of calm amidst the turbulence of the Arab Spring.

However, Friday’s assassination of Wissam al-Hassan – the country’s intelligence chief – has shattered this façade to unleash the very same forces that devoured the country during its many years of civil war.

Whilst these sectarian rifts have long characterised Lebanese society, they have been increasingly sharpened by the deepening conflict in neighbouring Syria. Lebanon’s Shia community, which includes Hezbollah, has backed the Alawite regime of Bashar al-Assad, whereas the country’s Sunni minority has supported the predominantly Sunni Syrian rebels.

Even though the Syrian army ended its 29-year occupation in 2005, Lebanon has nonetheless remained hostage to political machinations in Syria, with its weak government and fractious society providing a vehicle through which the Assad regime can wield influence.

As a leading Sunni figurehead, al-Hassan was widely hailed as a bastion of influence for Lebanon’s Sunni minority. A fierce critic of Syria, he represented an essential bulwark for the Sunni minority against the subversive reach of Damascus.

In 2005, he ruffled feathers by spearheading an investigation that implicated Syria and their Lebanese allies Hezbollah in the murder of five-time Sunni prime minister Rafik Hariri. The revelations sparked the Cedar Revolution, which effectively ousted Syrian forces from the country.

In August, he exposed the involvement of Michel Samaha – a key pro-Assad Lebanese minister – in a plot to plant explosives in the Sunni  district of Akkar, a hotbed of support for the Free Syrian Army. Bombs were found in the back of Samaha’s car and he was promptly arrested.

Naturally, his staunch anti-Syrian agenda had made him persona non grata with both Damascus and Lebanon’s pro-Syria Shia factions, particularly Hezbollah, to whom the survival of the Assad regime is essential.

It comes as no surprise then, that his assassination has been met with furios accussions of foul-play from Sunni opposition leaders, who have laid the blame squarely with the Assad regime:

“We accuse Bashar al-Assad of the assassination of Wissam al-Hassan, the guarantor of the security of the Lebanese”, said Saad Harir, leader of the Sunni Future Party and son of former prime minister Rafik Hariri.

“We blame Bashar al-Assad, the president of Syria”, a demonstrator told the Associated Press at Hassan’s funeral on Sunday. “He is responsible for everything – in the past, now, and if we don’t stand up to him, the future”.

The sentiment was shared by numerous Sunni protesters demanding the resignation of Prime Minister Najib Mikati, whose cabinet is dominated by Shia politicians believed to be in cahoots with Assad.

At Sunday’s funeral, demonstrators vented their rage by throwing volleys of stones, pipes, and bottles at police, with hundreds breaking away from the ceremony to storm Mikati’s offices at the government palace.

That night, the crack of gunfire rang out through central Beirut. Likewise, running battles between anti-Assad Sunni neighbourhoods and pro-Assad Shia communities rocked the coastal city of Tripoli, killing 7 and wounding dozens.

On Monday, Lebanese forces fanned out across the country, flanking major thoroughfares and dismantling roadblocks.

“We will take decisive measures to prevent Lebanon being transformed again into a place for regional settling of scores, and to prevent the assassination of the martyr Wissam al-Hassan being used to assassinate a whole country”, said an army statement. 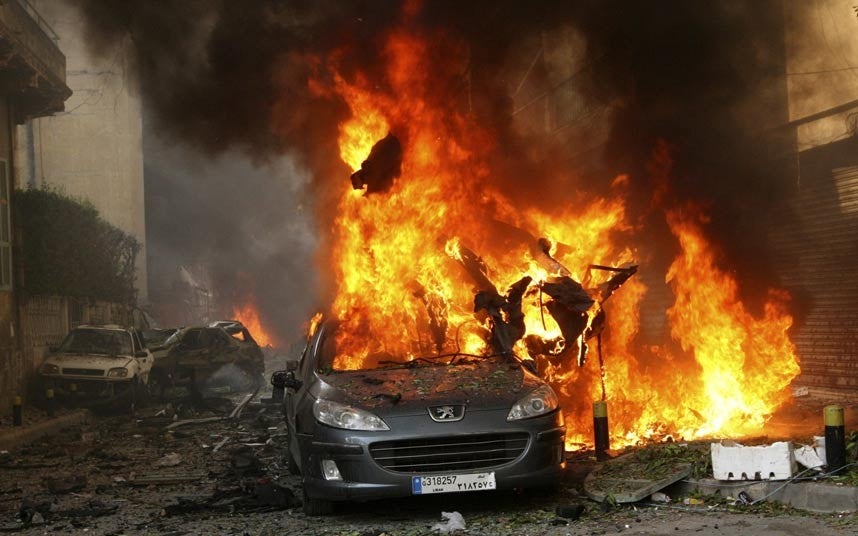 Lebanon is a country on the precipice. Whilst the country has pulled itself back from the brink numerous times since the end of its 15-year civil war, the fallout from Syria’s revolution threatens to exacerbate the sectarian divides that have plagued Lebanon throughout its history.

Whilst it would be naive to say the country is plunging headfirst into certain civil war, the current situation in Lebanon is a veritable powder keg; a tinderbox being licked by the flames of the Syrian uprising.

The death of Wissam al-Hassan has upended Lebanon’s fragile political balance, aggravating its historically embedded sectarian divide; a widening split that threatens to condemn Lebanon to a future much like its gloomy past.