For all its golden beaches and panoramic hillsides, Rio de Janeiro is a dangerous place. Homicide is the number one cause of death in “La Cidade Maravilhosa” and its numerous favelas have gained global infamy as the crucible for the city’s endemic drugs problem. Recently, Brazil became the world’s largest market for crack-cocaine, largely due to the rampant network of drug-traffickers that tyrannize the country’s cityscapes.

For a country scheduled to host both the 2014 World Cup and the 2016 Olympic Games, this is an enormous issue.

On Sunday, over 1,300 military policemen swept through two of Rio’s most notorious favelas – Manguinhos and Jacarezinho – in a substantial pre-dawn operation. Flanked by a phalanx of armoured vehicles and with helicopters hovering above, military policemen armed with high-calibre assault rifles poured into the slums. 60 kilograms of cocaine was seized and three suspected traffickers were arrested.

More importantly, control was restored to a portion of the city once lost to drug barons.

Sergio Cabral, Rio’s state governor, hailed the operation as “another step toward peace, for reducing the number of homicides, car thefts, and home break-ins”.

These operations have become commonplace in Rio as part of a wider security initiative to install “Police Pacification Units” (UPPs) – semi-permanent police forces – in the city’s most troublesome favelas. With the World Cup and Olympic Games fast approaching, UPPs have become the centrepiece of the city’s campaign to clean-up its image and tackle its perennial drug issues.

Beginning in December 2008, 6700 military police have installed 29 UPPs to reclaim territory lost to drug-traffickers, with 11 more planned before the World Cup’s opening fixture.

The brainchild of the initiative, Rio’s Security Secretary Jose Beltráme, hailed the success of the UPPs as a “major victory for society, for the people, for public service”.

However, many of the city’s residents aren’t convinced.

“It’s not guns that are going to make things better: It’s services. Things like running water, sewage, and shoring up unstable hillsides that can slip when it rains. And those aren’t here”, Jose Martins de Oliveira, a local resident of Rocinha, told the Associated Press.

Others protest that the measures serve only to displace the violence, with drug gangs simply upping sticks and moving to the city’s north-western favelas that lie beyond the reach of the UPP programme.

But this is the very essence of the initiative: redirecting the flow of crime away from wealthy areas set to host the mega-events and towards Rio’s more peripheral shanty towns, far away from the hordes of FIFA/IOC delegates and far away from the camera lens. In some cases, the government has even erected enormous walls to hide its shame.

And while these communities are forced to cope with an influx of drug traffickers, the residents in Rio’s “pacified” favelas don’t have it much better.

Rio’s police force has a nefarious reputation for brutality. Human Rights Watch reported that the rate of civilian deaths at the hands of Rio’s police was a staggering 57 times higher than in the US. This predilection for extra-judicial assassination is further encouraged by the chronic failure of the state’s justice apparatus to hold policemen accountable for murder, as courts rely almost entirely on police investigations for their inquiries.

The end product is a police force with almost total impunity and officers routinely opting for bullets instead of dialogue.

As Beltráme admitted himself: “In Brazil, the law is dictated by assault rifles”. 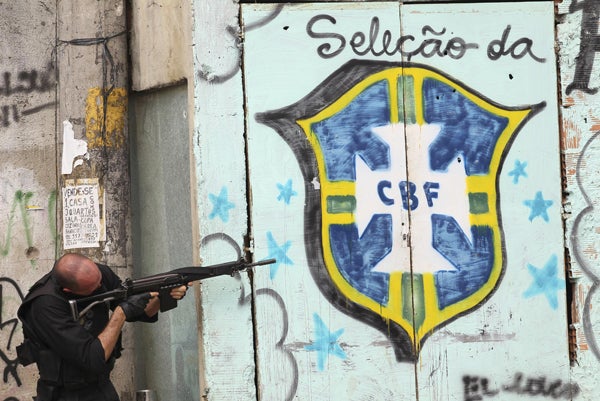 To make matters worse, the complex relationship between favela residents and drug traffickers has blurred the boundary between the two. Often, favela communities who are provided services by drug gangs are seen as complicit in the criminality.

“We were so hopeful”, Martins de Oliveira told the Associated Press.

The UPPs are essentially a top-down approach to a bottom-up problem. Instead of instilling martial law, the state must address the chronic lack of investment in vital services such as housing, public health, and education to confront the systemic failures of Brazilian capitalism.

What it has done instead has created a dual city: an Olympic city of opulence and a non-Olympic city plagued by the tyranny of unfettered crime and banalised police brutality. Ultimately, Rio’s favela communities find themselves wedged between the iron fist of the law and the merciless violence of turf wars.

Undeniably, the UPPs have produced results: homicides are down, robberies have fallen sharply and real estate prices have soared.

But this has come at a cost: growing social dislocation, urban militarisation and the erosion of civil liberties.

The World Cup and Olympic Games will certainly go some way towards cementing Brazil’s reputation as an emerging global player, but it will leave its people with a far more sinister legacy.