Well, here I am, wearing my fingerless gloves at my wooden desk in New Statesman towers, scratching this out by the light of a tallow candle. It’s Christmas Eve, and we’re about to pull down the shutters on the New Statesman website for the next two days while we argue with our families over who was the best Doctor and which is the worst rail franchise (David Tennant and First Great Western, obviously). We’ll be back on 27 December. In the meantime, a few announcements and nerdy statistics to tide you over: 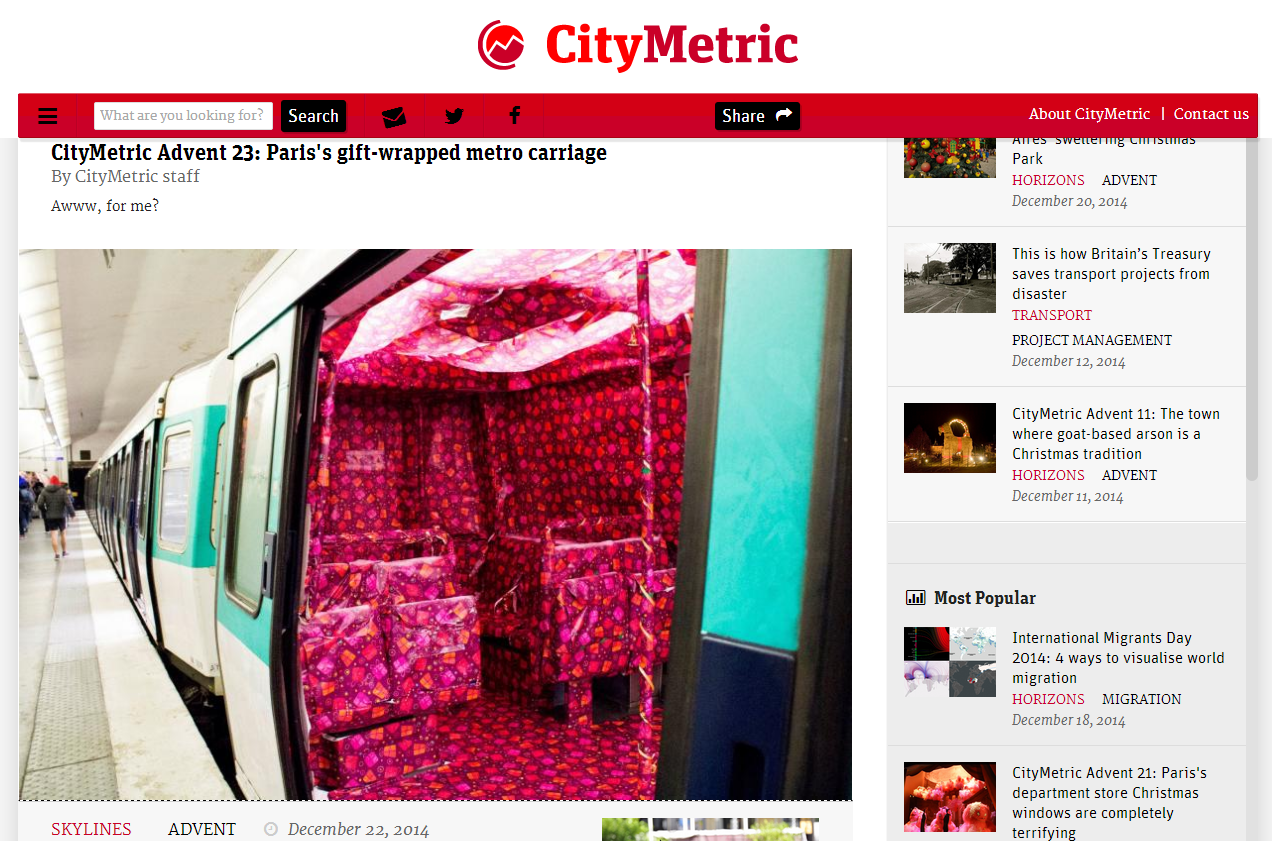 This year has been all about expansion: we’ve launched our sister sites Citymetric.com, helmed by Jonn Elledge and Barbara Speed; and May2015.com, edited by Harry Lambert. If you haven’t seen either of them before, why not start with their most popular pieces of 2014: Citymetric’s analysis of the problems with Google’s driverless cars and May2015’s investigation into whether opinion polls are over-estimating the SNP’s chances of taking seats off Labour. 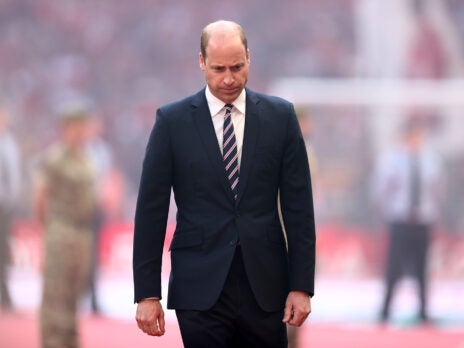 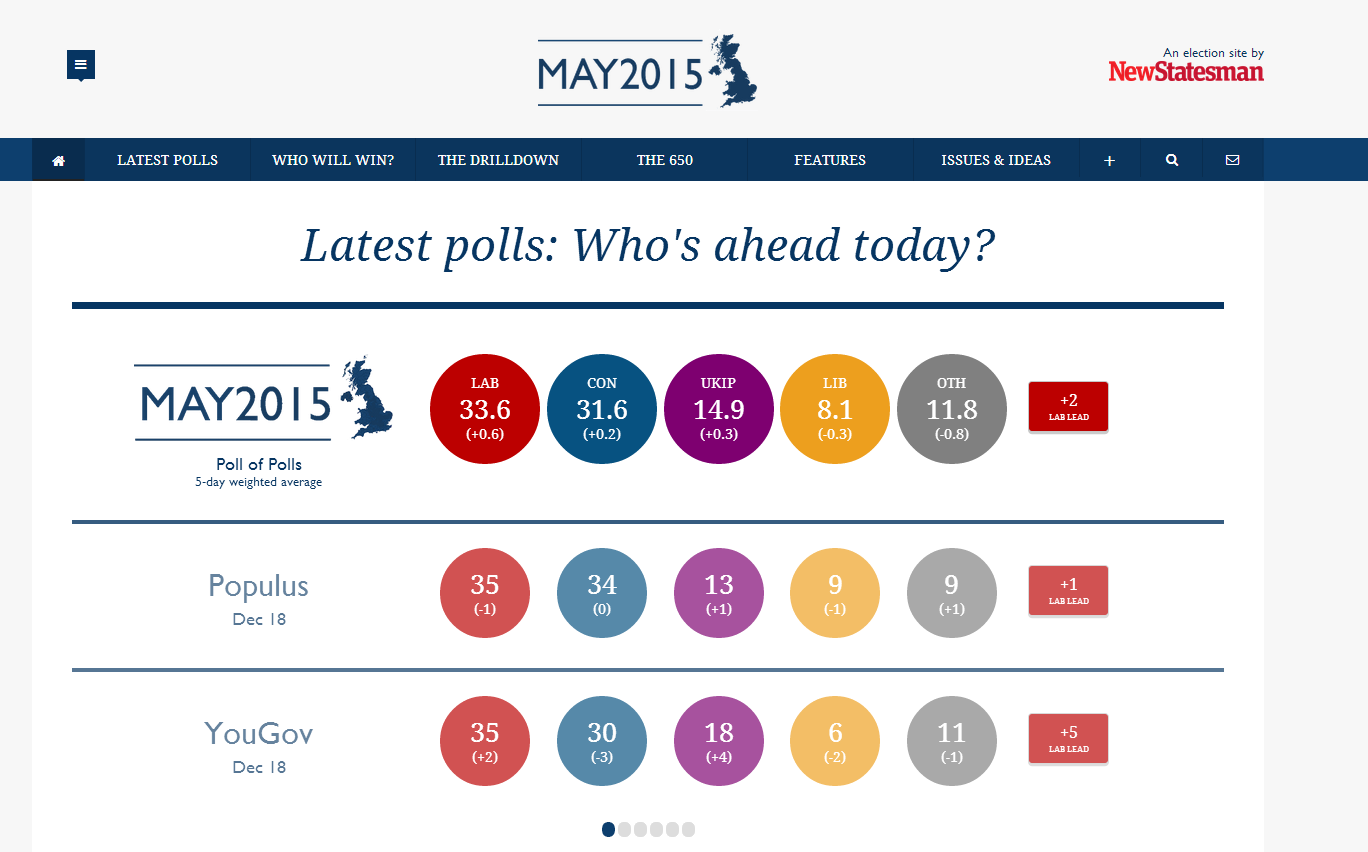 As part of May2015, we’ve launched “The 650” in print and online: yes, our writers are Leaving The Office (gasp) and getting around the country to some of the most interesting constituencies. Here’s Anoosh Chakelian in Bristol West, which is the Greens’ big hope next year, and Tim Wigmore in Great Grimsby, the former Labour heartland that’s flirting with Ukip.

For super-nerds, May2015 has some great polling tools that you can play with: The Drilldown uses data from GQRR which allows you to segment voters by age, class, gender and affiliation. Harry is also updating his “poll of polls” with every new survey that comes out (it’s currently predicting a hung parliament).

The future of NewStatesman.com

Now that we have our new sites up and running, attention turns back to the behemoth that is the New Statesman website itself. You might have noticed a few cosmetic changes this year (like a mobile-friendly article page) but next year will see a much larger overhaul. We’ve been thinking hard about the type of publication we are, and what our readers want, and we hope to have a few tricks up our sleeve.

One of our aims will be to integrate our ads better into our design: the advertising team (and the wonderful Cameron Sharpe, author of our twice-weekly newsletter) have worked hard this year to balance profitability and readability, but there is always more to be done. The news that the advertising industry is moving to metrics other than simple page impressions (like engagement and viewability) is good news for readers, as it disincentivises a “race to the bottom” by plastering a site with as many ads as possible.

Over the last few years, one of the lessons has been that the website doesn’t undercut the magazine: in fact, magazine subscriptions and news-stand sales have risen – unusually in our market – as our website traffic has grown. For the moment, we’re sticking to our policy of making all our web-only content freely available, but withholding some magazine articles until the relevant issue is off sale in newsagents.

You might have noticed that fewer articles now carry comments: moderation was proving a large burden on a small team, so we’ve decided to keep the conversations focused on specific pieces rather than inviting a free-for-all on everything. We’ve also noticed that as social media has become a bigger part of our readers’ lives, on-page comments have decreased: it looks like the conversations about our pieces are happening on Twitter, Facebook and other sites. That’s fine by us: social media is a big traffic driver, and we’ve ended the year with close to 100,000 Twitter followers and 75,000 on Facebook.

On the subject of platforms, I agree with Shingy: next year is all about HoMo (that’s using your mobile at home). Desktop computers now account for just half of our traffic, and mobiles 35 per cent. In 2012, the year I took over as editor of this website, those figures were 75 per cent and 17 per cent.

As you’d expect, the UK is the biggest source of our traffic, followed by the US – the first non-English speaking country on the list is Germany, at number five. (Frohe Weihnacht!)

Like most sites, our biggest social referrer is Facebook, followed by Twitter; Reddit is third, StumbleUpon fourth and then – a surprise to me, at least – Disqus is in fifth. While much has been made of Facebook’s declining influence due to Mark Zuckerberg turning down the dial on his News dashboard and turning it up on his Adverts and Baby Pictures dashboard, we haven’t seen that yet. As a proportion of our social traffic, Facebook has gained importance since 2012 – although perhaps we should attribute this to Ian Steadman’s expert Facebook skillz.

You guys love Chrome. It’s by far the most popular browser used to access the site. A big shoutout to whoever managed to make their browser show up in our analytics as “MicroHard ScapeGoat Explorigator”; I applaud your commitment to cheap puns.

Equally, chapeau to the 180,000 people who spent more than 1801 seconds reading a single article in 2014. I’m guessing you either left the computer on while you went out, or you were trying to read a Will Self column without a thesaurus.

Finally, this was our most retweeted tweet. Maths humour is the best humour.

And this was mine.

RIP Tony Benn. He made a secret memorial to suffragette Emily Davison in a Commons broom cupboard. via @FeministPics pic.twitter.com/jyLNMaOqno

In the New Year, we have a few staffing changes. Anoosh Chakelian, formerly acting Staggers editor, is now Deputy Web Editor, working with web editor Caroline Crampton to oversee all aspects of digital production and our outside bloggers. Stephen Bush has joined us from the Telegraph as Staggers editor, so he is the first point of contact for anything Westminster. Our new editorial assistant is Anna Leszkiewicz, and our new digital assistant is Stephanie Boland. Ian Steadman remains our science and tech correspondent, and gets the Golden Statuette of Beatrice Webb for writing our most popular article of the year – a very serious statistical investigation of how you are more likely to be bitten by Luis Suarez than a shark. It was a true viral hit* (*everyone else nicked the idea and wrote it up as if it were their own).

Next year, we will also be hosting two new Wellcome Trust Scholars – an expansion of last year’s successful initiative to encourage black and minority ethnic science writers. This year, we have two (paid) placements lasting six months up for grabs. Apply through our partners Creative Access here.

Our Top Ten Articles of The Year goes like this:

1. You are more likely to be bitten by Luis Suarez than a shark

2. Laurie Penny on why patriarchy fears the scissors

3. Harriet Williamson meets the women speaking out about Terry Richardson

5. Will Self on hipster hatred

7. Musa Okwonga on Jeremy Clarkson and the N-word

This is a top ten that gives me hope for the Future of Journalism, because the uniting factor among all these pieces is this – they are good. Different styles, different targets, but all funny, fresh, angry, insightful pieces of journalism (OK, and one quick aggregation post, but even that relied on George having all the material already in his enormous brain). Many of our top 50 pieces were notable for their length, too: it turns out that the internet hasn’t ruined our attention spans quite as much as we feared.

On that positive note, I am retiring to my Egg Nog Bunker to raise a toast to all our wonderful staff, to all our clever, witty, intelligent, beautiful bloggers – and of course, to you, reading this. It’s been a great year, but next year is going to be even better. (Except for the bit on election night before any results come in and it’s just David Dimbleby and three guests staring hopefully at Jeremy Vine, who is inexplicably dressed as a bear, explaining what Plaid Cymru want in a hung parliament. That bit will probably be just be weird.)