Eric Klarenbeek, a self-described “artist of the unusual” (he’s not wrong), has, along with the University of Wageningen, created the MyceliumChair. Mycelium is a bit like the root bit of a fungus, the long, wiry, almost hair-like strands that grow through the soil in search of nutrients. Klarenbeek 3D prints objects using a material that is just a mash of wet straw and mycelium.

The mycelium grows, absorbing water and filling the gaps between the straw, creating what Klarenbeek considers to be a very strong – yet lightweight – material. What you see at the top of this article is the final chair, dried out and wrapped in bioplastic to stop the mycelium growth getting out of hand.

Here’s a picture, to jog your memory: 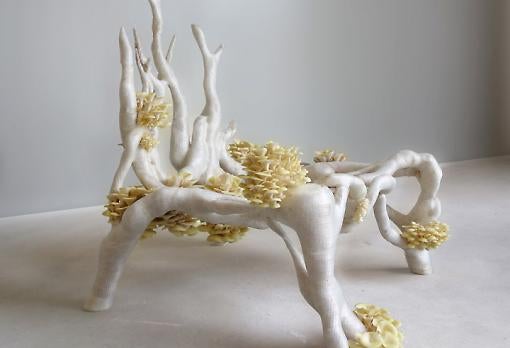 In that piece I mentioned a practice in New York City called The Living, which has been experimenting with fungus as a method for growing building bricks. Anyone visiting NYC from this June will get the chance to see a full-scale implementation of its work – its winning entry into the Museum of Modern Art’s annual Young Architects Program, “Hy-Fi”, is a tower grown out of fungus, “a building that grows out of nothing but earth and returns to nothing but earth”, MoMA says:

Using biological technologies combined with cutting-edge computation and engineering to create new building materials, The Living will use a new method of bio-design, resulting in a structure that is 100 percent organic material. The structure temporarily diverts the natural carbon cycle to produce a building that grows out of nothing but earth and returns to nothing but earth—with almost no waste, no energy needs, and no carbon emissions. This approach offers a new vision for society’s approach to physical objects and the built environment. It also offers a new definition of local materials, and a direct relationship to New York state agriculture and innovation culture, New York City artists and non-profits, and Queens community gardens.”

The two-storey towers, to be built in the outside space at MoMA’s PS1 venue in Long Island City, will use two kinds of brick. From the bottom until most of the way up the top the bricks will be made of a mixture of corn husk (a common agricultural waste product) and mycelium; at the top, there will be rows of bricks that are covered in a reflective film. After the tower is built, sunlight will be directed onto the fungal bricks below by the reflective bricks above, encouraging them to grow faster.

Unlike other buildings, then, Hy-Fi will continue to “build” even after everything’s in place. While it will start out as quite a light structure, the mycelium’s growth will increase its density. Here’s a promo video from The Living architect David Benjamin:

Inside the towers there’s going to be a space for sitting and relaxing, and outside there’s space for MoMA’s summer series of gigs and events. More importantly, it shows that there’s potential in seemingly useless waste products – and, better still, when summer’s up and Hy-Fi has to come down, the fungus bricks can be easily composted, while the reflective bricks get recycled in another project. It’s a completely sustainable building method from beginning to end.