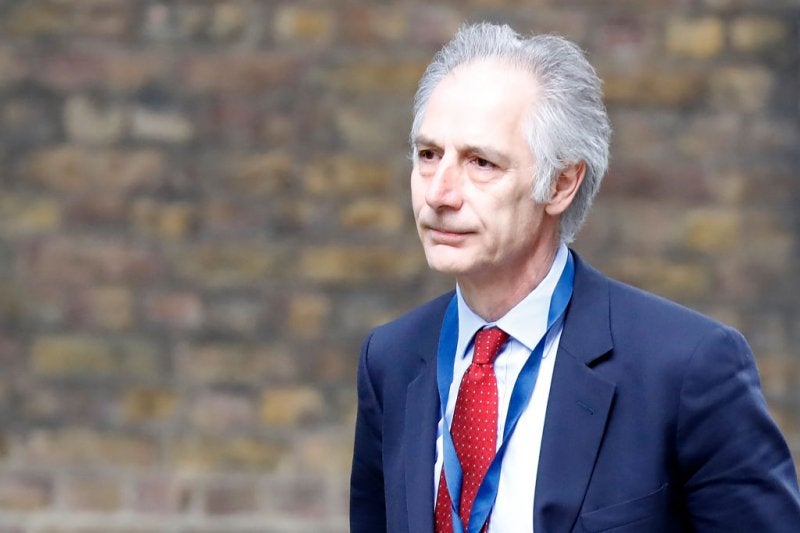 MPs will this morning quiz Professor John Newton, who is leading the UK’s testing strategy, about the country’s ongoing approach to testing, tracking and tracing coronavirus cases, and we’ll be covering the hearing live on this blog.

Newton will appear before the Science and Technology Committee at 9:30am, where he will be joined by Professor Yvonne Doyle, medical director and director for health protection at Public Health England (PHE). The committee chair is Greg Clark.

10:40am – Last question. The committee returns to the two-metre rule: can Doyle assure people that the distance will be driven by science, and not by concerns that changing the rule might confuse the public. Doyle says she can provide that assurance, and that it is constantly being looked at by PHE.

Summing up, Clark concludes there remains some “opacity” about early decisions around the pandemic, particularly about who made decisions for the UK to abandon contact tracing in early March.

That’s the end of the hearing.

10:38am – The committee asks what input PHE has had into plans for 14-day quarantine of new arrivals into the UK. What’s the scientific basis?

Doyle says 14 days is an international standard. It’s also what was used for self-isolation early in the pandemic.

10:35am – On schools, Doyle says the science shows children are infected less than adults, and that returning to schools is safe for children. However, she says the decision of whether to reopen will be up to schools, and parents will decide whether to send their children to schools.

She is confident some schools feel they are in a position to reopen, she says.

10:32am – The committee asks about the “system of certifications” the government is planning for people with immunity (Health Secretary Matt Hancock made the annoucement last night). What is the scientific basis?

Newton says the science on immunity is still unclear, and the government is conducting a trial with 10,000 people. We might not know for “some months” whether antibodies provide immunity.

The certifications announcement was assuming that, at some point in the future, we might learn that antibodies provide immunity.

10:28am – Close to wrapping up, Clark asks what the rationale is for the two-metre distancing rule.

Doyle says that it is line with World Health Organisation advice, and that the decision has been taken on a “precautionary” basis. “Until we know more… two metres is important,” she says.

Clark says other countries are using a shorter distance, including Hong Kong, Singapore, France, Germany and South Korea. “We are an outlier,” Clark says. Why have we chosen to be at that end?

Doyle says it’s a “learning experience” that will be subject to continued investigation. But the important thing is that two metres is a “precautionary measure”. But we will “learn” as we go along, she says, with a view to potentially reducing that distance.

She agrees it is an “important decision” that will affect hpw businesses trade. The science should inform the measures, she says.

10:25am – The committee asks what lessons have been learned from the Isle of Wight test, track and trace system. Newton says, first, that the NHS app must be integrated with physical, manual contact tracing. He also said that the number of contacts of individual people remains low, thanks to social distancing.

The committee asks whether the app will be ready by 1 June.

Newton says it can “be improved”. And that it’s not his place to say when the app might be ready. He stresses that the app is an “extra”, and that manual contact tracing remains the core of the system.

It is put to Newton that manual contact tracing might be too slow, and that the app is needed for faster tracing. He says they should be used in combination: the app has speed, but lacks “precision”, he says.

10:20am – Newton says that the capacity of “test and trace” far exceeds the current number of positive tests. The challenge will be ensuring tests get to where they’re needed fast, he says.

10:16am – On antibody tests, Newton says their value remains “limited” because we don’t know whether antibodies give you immunity against secondary infection.

He stresses that the antibody tests the government has approved are different, and far more accurate, than those available on the high street. He advises the public to avoid the high street tests.

10:14am – The committee asks what the governemnt 200,000 test target by the of the month refers to: Newton says it relates to the number of tests, not the number of people.

This is confusing, because the government has previously said the target refers to capacity, not the number of tests carried out.

10:12am – Newton is asked how many home tests posted out by the government have actually be returned to labs, for the test to be completed. Newton says that it was “certainly more than half” early in the programme, but he doesn’t have an up to date figure. That includes tests posted to satellite centres, which provides tests to healthcare settings such as care homes, he says.

10:08am – The committee says that the government claims to be carrying out 100,000 tests, but that some are counted when they are “posted” to household. Does the PHE have a view on what the definition of a test carried out might be?

Newton says the way tests were counted were discussed with Department of Health officials, who advised PHE on the best way of counting.

Newton says the key is they’re only counted once, and once they are posted, they leave the “control” of the system. The key is that, whatever way you count them, “it’s a large number” of tests. PHE’s focus has not been on hitting a number.

10:05am – The committee asked whether we are currently following a centralised approach to, first, testing and, second, the app.

Doyle says we are not following a centralised approach to testing. On the app, some centralisation is needed.

Newton confirms that testing is decentralised, with the Department of Health setting standards for labs to follow. “Centralised strategy” with “decentralised provision”, he says.

10:00am – The committee again says some laboratories’ offers to help were ignored. Newton says government, not PHE, fielded their request.

The committee says that it feels like Newton and Doyle are saying they wouldn’t do anything differently if they could go back. Doyle said that’s not right: she has set up a “lessons learned group” for that purpose. She says looking at rules around laboratories will be one area the group examines.

09:52am – It’s getting a bit feisty, here. The committee presses Doyle on why PHE has provided “nonsensical” letters to the committee about the UK’s decision to abandon contact tracing. Doyle begins talking about why the decision was taken, but is cut off, and again asked why the PHE provided these non-sensical letters. She says the letters do refer to why contact tracing changed: the evidence was that “contact tracing could not possibly have the capacity” to run effectively with the scale of the UK outbreak in early March.

The committee asks why offers from laboratories to help with testing early in the pandemic were rejected.

Doyle said it did not reject those offers. But she says the UK still did not have capacity for mass testing. Some laboratories were not able to help because coronavirus was a novel virus and classified as a dangerous pathogen, which limited the labs that could test. PHE noticed this, and quickly asked the government to reclassify the pathogen, opening it up to more labs, which the government promptly did.

09:45am – Doyle’s video team is back up and running. Clarke presses her on who decides PHE advice on testing. Doyle said a group of senior officials, a cabinet, at PHE take decisions, and compile daily reports and regular papers. “Some of that information” are provided to Sage based on PHE modelling.

Clark asks whether the committee can have papers from the PHE cabinet. Doyle says it can, but some of the papers have gone to Sage, and they will be made public separately.

09:35am – Doyle is asked whether the UK rejected the South Korean mass test and trace model early in the pandemic, leading to the halting of the UK’s test and trace strategy in early March. She says PHE did carry out an assessment – committee chair Greg Clark pushes for details. When was it carried out?

Doyle said assessments were carried out at various points, from “right from the start” of the pandemic.

Clark asked when those assessments would be published. The committee was promised copies of assessments, but they have not materialised. Doyle apologises, but says the information is made available in public via the government’s daily situation reports. Doyle’s video feed is cut off, so Clark puts the question to Newton.

Newton says the government carries out weekly comparisons with other countries, including South Korea. He repeats Doyle’s points that epidemiological data is in the public domain, and he can point Clark to the specific information.

Clark continues to press. The committee was previously told that PHE was studying the South Korea model, and decided to go in a different direction. When will its assessment be published?

Newton says there was a discussion with Scientific Advisory Group for Emergencies (Sage) in February about following the South Korean model. The decision was made by government, not by scientists at PHE or on Sage, he adds.

Scientists believed that the epidemiology of the UK suggested the possibility of a million cases, which contrasts with South Korea’s relatively small outbreak, which explains why scientists advised a different model.

Clark will not let the point go: previous comments to the committee suggest PHE made a decision, but Newton says government makes the decisions, and PHE advises?