What do voters think about no deal? The answer to this question matters enormously. If, as seems likely, voters get a say – either before or after any final decision to leave the EU with no deal – it’s useful to have some idea how they might react.

With this in mind, the UK in a Changing Europe commissioned some polling, conducted by YouGov in August 2019, to accompany our new report which is out tomorrow, which describes what the impact of no deal might be. Our polling asked voters three things: whether they expect no deal, what they expect from it, and how they would feel if the UK left the EU without an agreement.

Firstly, we asked voters to predict – on a scale of 1 to 6, 1 being no deal “definitely will not happen” and 6 that it “definitely will” – whether we would leave on 31 October without an agreement. And voters are, it’s fair to say, as nonplussed as those in the Westminster Village.

That’s not to say, however, that voters don’t have a strong perception of what no deal will involve. And, on some things, there is a degree of pessimism (or potentially realism) shared by both Leavers and Remainers about the short-term impact of no deal at least. Some 81 per cent of Leave voters accept there will be at least some short-term disruption.

Whether they voted Leave or Remain in 2016 they tend to agree with most credible economists that, over the next 12 months, the value of the pound will fall and the price of food in the shops will rise. They are also likely to think that, on balance, trade with the EU will fall. However, two of the key claims of the Leave campaign – that immigration would fall, and trade with the rest of the world would go up – are still seen as more likely than not by a plurality (though not a majority) of voters. 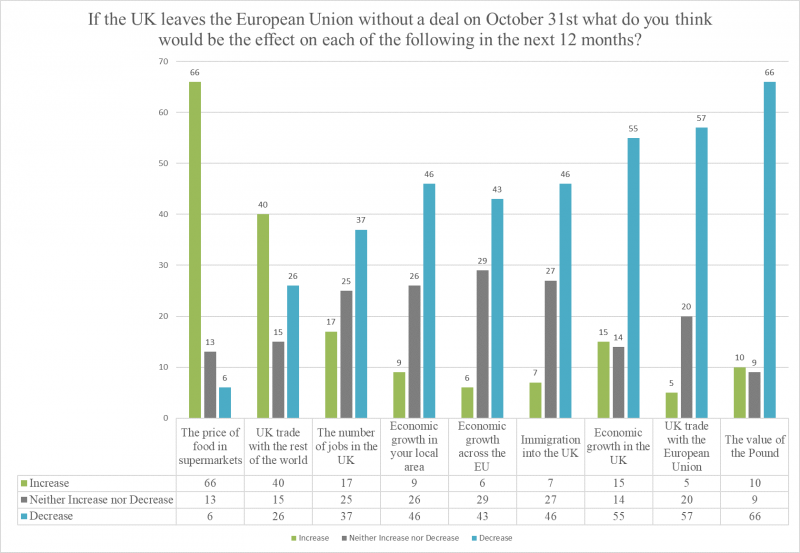 Why is this? Well, while people who voted Remain have an overwhelmingly negative reaction, 2016 Leavers do not have an overwhelmingly positive one. Indeed, around one in five of those who voted Leave say they would be angry, betrayed or disappointed were the UK to leave the EU without a deal. In contrast, perhaps less surprisingly, only 2 per cent of 2016 Remain voters say they would feel relieved, and 1 per cent pleased or delighted. 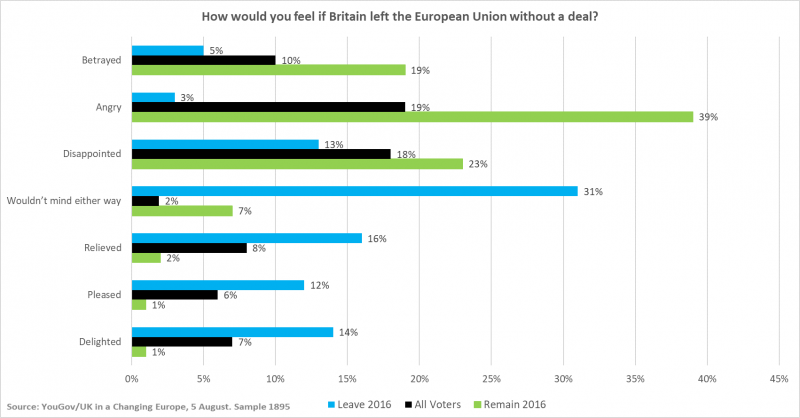 The most popular response among Leavers who answered was that they “wouldn’t mind either way”. This suggests something of an enthusiasm gap: Remain voters seem likely to feel politically engaged by a sense of defeat, Leave voters appear more likely to shrug than start dancing in the streets.

What does all this mean? Well, it suggests voters have as little idea what September and October will bring as the commentariat. It suggests they are going into a potential no deal with their eyes open to the short-term problems it might generate. Yet if we take these findings to imply Leavers will shrug while Remainers are infuriated, they do hint at the dangers inherent in an electoral strategy that sees no deal as a springboard for achieving a Tory majority. At a minimum, this should give some pause for those who assume any no deal strategy Boris Johnson might pursue is without significant political risk.

Anand Menon is Director of the UK in a Changing Europe

Anand Menon is director of UK in a Changing Europe (UKICE).