The Invention of News: How the World Came to Know about Itself
Andrew Pettegree
Yale University Press, 448pp, £25

Anybody who says they can predict the future of newspapers is either a liar or a fool. Look at the raw figures, and newspapers seem gripped by terminal illness. Since 2000, the circulation of most UK national dailies has fallen by between a third and half. The authoritative Pew Research Center in the US reports that newspapers are now the main source of news for only 26 per cent of Americans against 45 per cent in 2001. There is no shortage of Jeremiahs, particularly from the wilder shores of digital evangelism, who confidently predict that the last printed newspaper will be safely buried within 15 years at most.

Yet one of the few reliable laws of history is that old media have a habit of surviving. An over-exuberant New York journalist announced in 1835 that books, theatre, even religion “have had their day” and the daily newspaper would become “the greatest organ of social life”. Theatre outlasted not only the newspaper, but also cinema and then television. Radio has flourished in the TV age; cinema, in turn, has held its own against videos and DVDs. In the first eight months of 2013, US hardback book sales rose 10 per cent while ebook sales fell. Even vinyl records have made a comeback, with sales on Amazon up 745 per cent since 2008.

Newspapers themselves were once new media. Yet as Andrew Pettegree explains in an elegantly written and beautifully constructed account, it took several centuries before they became the dominant medium for news. This was not solely because producing up-to-date news for a large readership over a wide area became practicable and economic only with the steam press, the railway and the telegraph. Equally important was the idea that the world is in constant movement and one needs to be updated on its condition hourly (or even monthly) – a concept quite alien to the medieval world and probably also to most people in the early modern era. 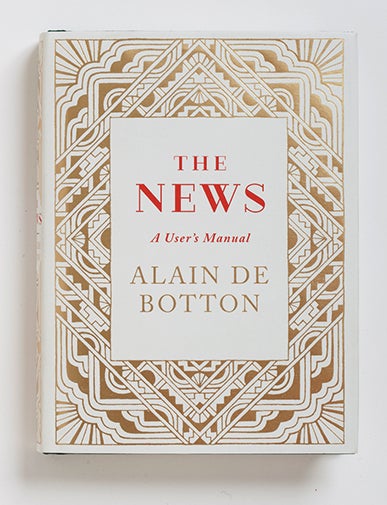 Now, we expect change, as Alain de Botton argues in his playful inquiry into how we read and use the news, to be “continuous and relentless”. We think some extraordinary development may alter reality: a proposal for a new motorway or railway, a cure for a disease previously thought untreatable, a revelation that a once-admired celebrity molested under-age girls. To our ancestors, the only realities were the passing of the seasons, punctuated by catastrophes such as famine, flood or disease that they had no reliable means of anticipating. Life, as de Botton puts it, was “ineluctably cyclical” and “the most important truths were recurring”. Even if regular access to news had been possible, the medieval world wouldn’t have seen the point of it.

This is not to deny that details of new laws and taxes, armies and their movements, or who was in or out of favour at court were eagerly sought. Travellers were closely questioned as to the news they brought. But it would have been perfectly normal and acceptable to say, as a BBC announcer did on Good Friday 1930 (to much subsequent mockery), “Ladies and gentlemen, there is no news tonight, so here is some music.”

The medieval world received news orally. First-hand information from people who had witnessed important events was highly prized, at least by those, such as merchants and property-owners, who had some interest in its accuracy. To larger audiences, news might be conveyed by drama or song. Written accounts were mistrusted because the writer was not usually available for cross-questioning. This helps explain why, despite Gutenberg’s invention of moveable type in the mid-15th century, the development of newspapers was so slow.

The first commercial news services, which emerged in 16th-century Italy, were confidential weekly handwritten briefings, known as avvisi, sent to selected subscribers including many of Europe’s rulers. They still dominated the Italian news market in the early 17th century. These avvisi possessed, Pettegree writes, “a subtlety and flexibility lost in a public printed document”. The scribes who copied them out doubtless felt as insecure in their employment as today’s newspaper journalists. But the apparently obsolete means of production guaranteed their exclusivity, their intimacy and, in the eyes of their readers, their reliability.

Early printed newspapers, though they had the potential to reach a wider audience, tended to imitate this elite form of communication. Most of their news was foreign; domestic news carried too many dangers of attracting government censorship or worse. They rarely attempted analysis or comment. For readers ignorant of leading European political figures, shifting international alliances or the geographical location of German principalities, they offered little assistance. To many readers, newspapers must have seemed to offer, as Pettegree puts it, “an undigested and unexplained miscellany of things that scarcely seemed to concern them at all”.

For most of the two centuries after Gutenberg, the news pamphlet was a more successful medium. It appeared sporadically when, in the publishers’ judgement, a big news event created a significant market. At its best, it could present news as a coherent, connected and complete narrative, without the half-truths, unanswered questions and loose ends that always characterised even the most high-minded newspapers. Pamphlets allowed readers to dip in and out of the news as they chose, opting for subjects that piqued their interest or seemed to affect their lives. Above all, they reflected the incontrovertible and eternal truth, almost entirely lost to our own age, that news is more urgent at some times than others. 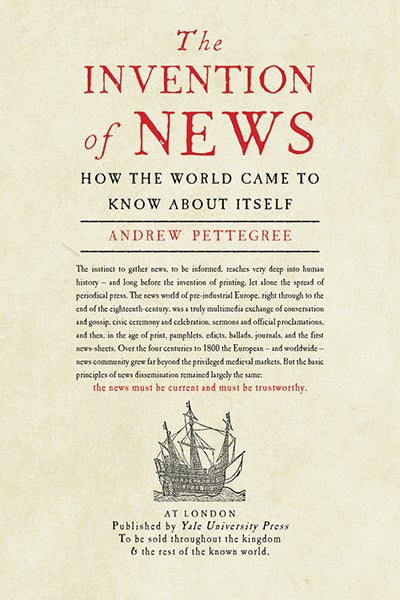 Newspapers, by contrast, offered mostly routine and unresolved events: as Pettegree describes it, “ships arrive in port, dignatories arrive at court, share prices rise and fall, generals are appointed and relieved of command”. Is that so very different from the celebrity relationships that today’s downmarket papers so painstakingly report? Or the daily ministerial and opposition manoeuvres that form the daily diet for broadsheet readers? Is the latest shift in Labour social policy or the latest boyfriend of a minor Coronation Street actor of any greater importance to readers than developments in the Muscovy court that early modern papers faithfully reported?

For all the cacophony of information that surrounds us, no medium now reliably performs the service of the early modern pamphlet, giving us narrative news with a beginning, a middle and an end. In January, the journalist Ron Hall, a founder member of the Sunday Times Insight team in the 1960s, died. In its early days, Insight’s job was to give a context to the week’s news, often challenging conventional wisdom about what it signified. The Times obituary said of Hall that he was “a master of reductive research, assembling as many sources as possible, eliminating redundant information, then focusing on the shaping of the core story”. Sunday newspapers no longer have sufficient resources (or perhaps sufficient journalists like Hall) to do such a job with conviction. “Instant books” – of which the Insight team produced several – have largely gone out of fashion, as have TV news documentaries such as World in Action. The closest approaches to news narrative at its best come from radio (particularly Radio 4’s Analysis) and the weekly or monthly magazines.

If de Botton’s frustratingly diffuse book has any central theme, it is this: that, as he puts it, “news as it exists is woefully short on the work of coordination, distillation and curation”. Nothing can be discussed or reported calmly. Read any British daily paper (with the sole exception of the Financial Times) and you are assailed by examples of cruelty, injustice, falsehood, hypocrisy, greed and incompetence, sometimes in a single story. The “fury” expressed by somebody or other – often the newspapers themselves – spills over into radio, TV and social-media sites. There is no hierarchy of rage, no modulation of tone, no admission of uncertainty. As de Botton observes

We are in danger of getting so distracted by the ever-changing agenda of the news that we wind up unable to develop political positions of any kind. We may lose track of which of the many outrages really matters to us and what it was that we felt we cared about so passionately only hours ago.

A good test of the truth of this observation is to take a random sample of ministerial resignations from more than few months ago and then try to remember why the minister had to go.

Today’s news is full of loose ends. Is anybody now following what the government or the EU is doing about bankers’ bonuses? Or what has been established about British complicity in the torture of suspected terrorists and who was responsible for it? Or what is being done by whom about global warming? Or what is happening to newspapers themselves in the wake of the Leveson report? If people are increasingly cynical and apathetic about public affairs, the responsibility lies with the news media as much as with politicians. De Botton writes:

There are dynamics far more insidious and cynical still than censorship in draining people of political will; these involve confusing, boring and distracting the majority away from politics by presenting events in such a disorganised, fractured and intermittent way that. . . the audience is unable to hold on to the thread of the most important issues for any length of time.

In Pettegree’s account, newspapers, which eventually came to be seen as part of the natural order of things, struggled for a long time to find a role. Journalism as a full-time trade from which you could hope to make a living hardly existed before the 19th century. Even then, there was no obvious reason why most people needed news on a regular basis, whether daily or weekly. In some respects, regularity of publication was, and remains, a burden. The daily paper’s pagination – usually dictated by advertising rather than editorial requirements – or Newsnight’s 50 minutes to fill each weekday night requires sustained drama and urgency, which cannot be varied according to events.

Online news sites avoid the rigidity of periodical publication. Particularly if access is free, readers can dip in and out according to how they perceive the urgency of events. Increasingly sophisticated search engines and algorithms allow us to personalise the news to our own priorities and interests. When important stories break, news providers can post minute-by-minute updates. Error, misconception and foolish speculation can be corrected or modified almost instantly. There are no space inhibitions to prevent narrative or analysis, and documents or events cited in news stories can often be accessed in full. All this is a world away from the straitjacket of newspaper publication. Yet few if any providers seem alive to the new medium’s full potential for spreading understanding and enlightenment.

The anxiety is always to be first with the news, to maximise reader comments, to create heat, sound and more fury and thus add to the sense of confusion. In the medieval world, news was usually exchanged amid the babble of the marketplace or the tavern, where truth competed with rumour, mishearing and misunderstanding. In some respects, it is to that world that we seem to be returning.

Newspapers, Pettegree speculates, may have become established only because, at some stage in the 18th century, they became a fashion accessory – a badge of status for the country squire in Somerset or physician in Montpelier, previously deprived of knowledge of what happened in circles of metropolitan power. But they have never been very good – or not as good as they ought to be – at telling us how the world works. Perhaps they now face extinction. Or perhaps, as the internet merely adds to what de Botton describes as our sense that we live in “an unimprovable and fundamentally chaotic universe”, they will discover that they and they alone can guide us to wisdom and understanding.