Ahead of PMQs, today’s jobs figures are a gift for David Cameron. Unemployment has fallen from 7.4 per cent to 7.1 per cent, the sharpest drop since 1997 and the lowest level since the start of 2009. In the same quarter, employment rose by 280,000 (0.5 per cent), the biggest quarterly increase on record. There are still far too many people working part-time because they can’t find full-time jobs (1.4 million) but the situation is better than almost anyone expected. As recently as August, when it introduced forward guidance for interest rates, the Bank of England expected unemployment to fall to 7 per cent (the trigger for the MPC to consider a rate rise) in 2016. It is now just 0.1 per cent above that level. 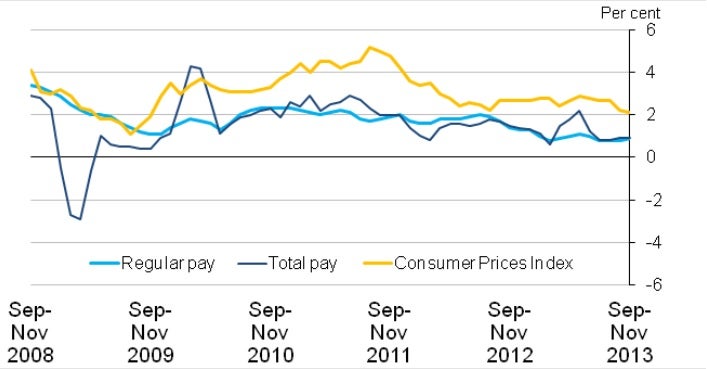 But the counterpart to the jobs boom is the wage squeeze. Average earnings are up by just 0.9 per cent (as people price themselves into work), leaving them 1.1 per cent below inflation. Those Tories who proclaimed the end of the “cost-of-living crisis” when inflation fell to the Bank’s target rate of 2 per cent have been left looking predictably foolish. After five years of declining real wages, there is still no end in sight to the longest fall in living standards since 1870. So long as that remains the case, Cameron will still struggle to rebut Ed Miliband’s attack lines.