For the first time in more than four years, inflation sits at the Bank of England’s target rate of 2%. This news has prompted some Tories to suggest that the “cost of living crisis” spoken of by Labour is all but over. The Tory Treasury Twitter account declared: “Labour backed Plan B which fell apart as economy recovered. Now they’re backing off from cost of living as inflation falls” and Conservative MP Harriet Baldwin tweeted: “Thank you @bankofengland for keeping cost of living under control”.

But while the sharp fall in prices (CPI inflation is down from 2.9% in June 2013) has eased the squeeze, it would be both foolish and wrong for the Tories to claim that it is over. Even at its current low level, inflation is likely to outpace wages for months to come, with average weekly earnings rising by just 0.9% in the most recent quarter – a real-terms cut of 1.1%.

After falling for five years – the longest squeeze in living standards since 1870 (see the Resolution Foundation graph below) – wages are forecast to finally outstrip prices at some point this year. But it will take more than a few months of growth to make up the ground lost since the crisis. By 2015, as the IFS recently reported, living standards are still likely to be lower than they were in 2010, with voters currently an average of £1,600 a year worse off. Average wages are not forecast to reach their pre-recession level until 2018, while median wages will be still well below their pre-recession level and no higher than they were in 2003. 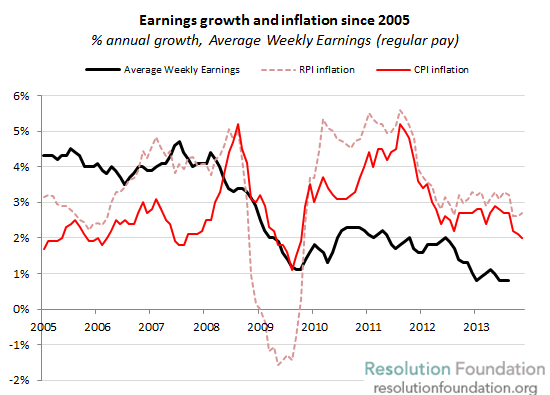 The Tories might eventually be able to point to rising wages as evidence that “we’re heading in the right direction”, but for many there is no end to the squeeze in sight. All public sector workers earning £21,000 or more have had their pay increases capped at 1% until 2015-16, guaranteeing further real-terms cuts into the next parliament (in the most recent quarter, their pay fell in nominal terms by 0.3%) Others in the private sector will remain stranded in low-paid, part-time jobs (a record 1.47 million people are working part-time because they can’t find full-time jobs) that do not provide enough for them to maintain their family’s living standards.

Rather than suggesting that the crisis is over, the Tories would be wiser to offer solutions to it. As the Conservative group Renewal has argued, the party should look to increase the minimum wage in real-terms, build a million homes over five years, and strengthen consumer protection. The Tories’ greatest weakness remains that they are viewed as “out of touch” by most voters; they would be foolish to confirm this perception by declaring the war won while millions are still struggling.