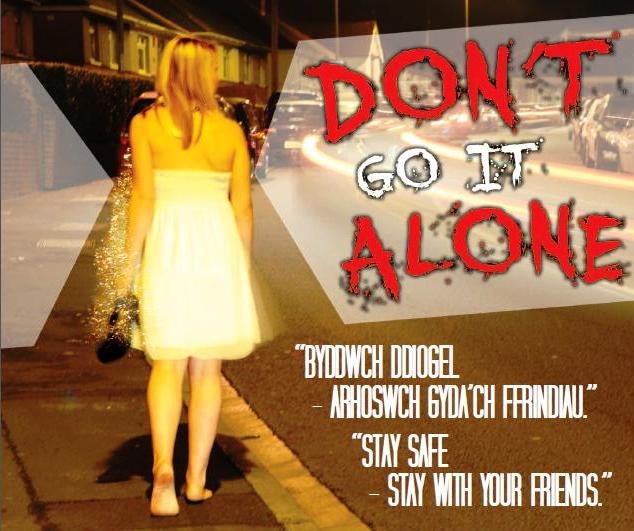 Christmas would be nothing without its traditions. The stocking on your bed, the Quality Streets in your stomach … your local police force’s tips on how not to get yourself raped. “It’s Christmas, ladies! Here’s a reminder how not to get raped!”

Every year sees anti-rape campaigns and, without fail, every year sees anti-rape campaigns that show no understanding of rape. Nottinghamshire police hit the headlines today for basing their campaign on a re-working of The Nightmare Before Christmas (the line “it happened in a flash” didn’t do much to convey a victim’s ordeal). Compared to some efforts, Nottingham’s “Don’t think you can take what you want because you want it” campaign was almost evolved. It’s not that Britain’s police forces like rape. The good news is the majority of this country’s police forces know rape is definitely a bad thing. They just haven’t all quite worked out who’s to blame for it.

What did Boris Johnson know about Christopher Pincher?

It might be the women who aren’t organised. Cumbria police have launched the ‘Keys, Money, Phone, Plans to get home’ campaign for Christmas 2013. They’ve helpfully coloured it pink so ladies know the message is just for us.

Then again, rape might be the fault of women who walk home alone. In a poster that manages to perpetuate rape myths in two languages, South Wales police are very clear that they don’t want us to GO IT ALONE, producing an anti-rape campaign that puts red, blood-tinged wording next to a scantily clad woman stumbling home. This focus is despite the fact women are more likely to be raped by the men they go home to.

Or rape might be the fault of women who drink too much. ‘Go out and enjoy yourself but think before you drink’, West Yorkshire police tell us, in their best impression of your sexist dad. It’s unclear what exactly a woman is meant to think about before she drinks but I imagine it isn’t whether she can afford the next vodka.

There’s often confusion about whether victims of sexual abuse are different than victims of property crime. West Yorkshire police have decided to answer this question once and for all by using exactly the same Christmas campaign for theft and rape – just replacing the man flashing his cash with a woman dancing. A woman having (too much?) fun and then being raped is definitely the equivalent of a man hanging an expensive phone out his pocket and then having it stolen. “Look at her, throwing her appealing body around in plain view of rapists. She should put that away for safe keeping!”

The police service of Northern Ireland, meanwhile, have announced that alcohol is the number one rape drug and ask us how much we’ve taken already. Women are so complicit in our own rape that we’re now actually drugging ourselves.

Or, y’know, rape might be the fault of the men who decide to rape. In a culture where women wearing hairy stockings and chastity pants are genuinely what some humans think are the best ways to stop men from raping, perhaps none of this should be surprising. But it has to be said, it’s particularly depressing when it’s the police – those people whose job it is to be trusted to prevent and provide justice for victims of crime – who can’t address sexual violence without perpetuating victim-blaming myths.

It is true that someone who is drunk, alone, and stumbling home can be vulnerable to rape. It’s also true that campaigns that successfully got women to be sober, carry a foghorn, and be in bed by 9pm would not deal with the fact there are men out there who think it’s perfectly OK to rape them (or deal with the majority of circumstances that don’t fit the ‘stranger following a drunk girl home’ model). It does, however, reinforce the idea that plagues women from school to adulthood: it isn’t men’s responsibility not to be a rapist, it’s women’s responsibility to avoid being victims.

West Mercia and Warwickshire’s joint campaign ‘Stop Rape Now’ is a rare example of excellence. ‘Having fun is not a crime,’ their Christmas campaign says. ‘Rape is.’ It’s a message that needs getting out to both survivors and rapists. And alarmingly it seems, many of this country’s police forces.