When the biggest pop star in the world (and there’s a good case for giving Beyoncé that title) turns out a whole album fully formed with no trails or teasers, the world pays attention. When she uses that attention to make a declaration like ‘Pretty Hurts’, you know she’s not just any old pop star: Beyoncé has come out with a fists-up feminism that brings the fight to the very industry she belongs to. “Perfection is the disease of a nation”, she calls out, all the power and control of that perfect voice turned to the expressing hurt and fury at the cult of beauty.

In the video, she’s a contestant in a pageant, timorous at the compere’s questions, necking diet pills backstage. Promo videos normally tell us a fiction about the glorious centrality of the star. In Britney’s tawdry ‘Work Bitch’, Spears is Queen Domme, cracking a whip over a crew of bound and writhing female dancers; the video for Lily Allen’s wry ‘Hard Out Here’ is a satire of its genre, and opens with a campy rejection of plastic surgery, but she’s still the girl in the middle while her black dancers twerk sarcastically.

The shocking thing about the ‘Pretty Hurts’ video is that it shows Beyoncé as just another competitor and vulnerable like the rest – which after all, is what she is. Hanging onto your place in popular culture is a dicey business. The possibility of someone a bit younger, a bit prettier and a bit more naked stealing up behind you is constant. I fell in love with Beyoncé whipping her hair in a wind tunnel for ‘Crazy in Love’ and staring me down while shaking her thighs in ‘Telephone’: seeing her drop the performance of power to show exactly how cruel prettiness can be is heartbreaking, but it’s also a triumphant shattering of the lie. 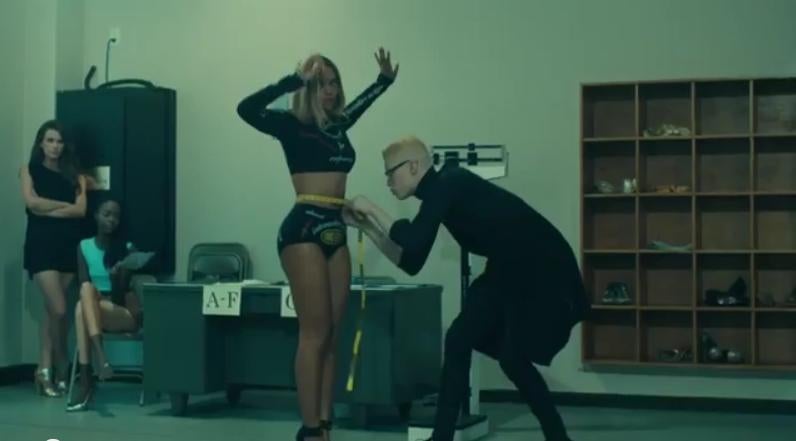 Beyoncé in the video for ‘Pretty Hurts’

It’s been a good year for feminists on the dancefloor: Janelle Monae and Erykah Badu’s irresistibly squelchy ‘Q.U.E.E.N.’ hit in April, a side-eying list of challenges to take women on their on their own terms. ‘Hey brother can you save my soul from the devil . . . Hey sister am I good enough for your heaven? Will your your God accept me in my black and white?’ By the time Badu demands of us ‘Electric ladies will you sleep? Or will you preach?’ you’ve danced yourself into knowing exactly which is the right answer.

In fact, there’s been preaching going on all over while Miley’s tongue and Thicke’s dick have been causing distraction. Neko Case, who’s never been shy about claiming her feminism, brought out the track ‘Man’, which gallops through the most comprehensive trashing of gender you’ll hear this year, her swoony, smoky, womanly voice sternly declaring: ‘I’m a man/It’s what you raised me to be/I’m not an identity crisis/This was planned.’

With Haim bossing classic rock, it feels like something’s up: maybe men just aren’t good at music anymore. Heck, even Katy Perry took time out from being a saucer-eyed boy toy to make ‘Roar’, an empowerment anthem that she gets through without once reminding us how much men like to look at her bottom.

But none of these pull off what Beyoncé does in ‘Flawless’ when she pulls in Nigerian author Chimamanda Ngozi Adichie (whose brilliant novel Americanah came out this year) to give a speech on all the ways ‘we teach girls to shrink themselves’.

‘Feminist: a person who believes in the social, political and economic equality of the sexes,’ concludes Adichie. It’s hard to think of a better definition than that, or a better place to put it than near the climax of the biggest pop album this year.