Mumsnet has recently published the results of its Feminism Survey, conducted in July with over 2,000 participants. Unlike the universally-panned (but much hyped by the media) Netmums feminism survey of 2012 that reported the movement was off-putting to most women and instead championed “the rise of the feMEnist” (I blogged about this) – this survey is actually a little bit heartening.

It found that members of Mumsnet felt that being a part of the site had made them more likely to identify with feminism, more aware of feminist perspectives on everyday issues, and and had changed their opinions on what constitutes domestic abuse, as well as enabling them to understand different perspectives and choices to their own. 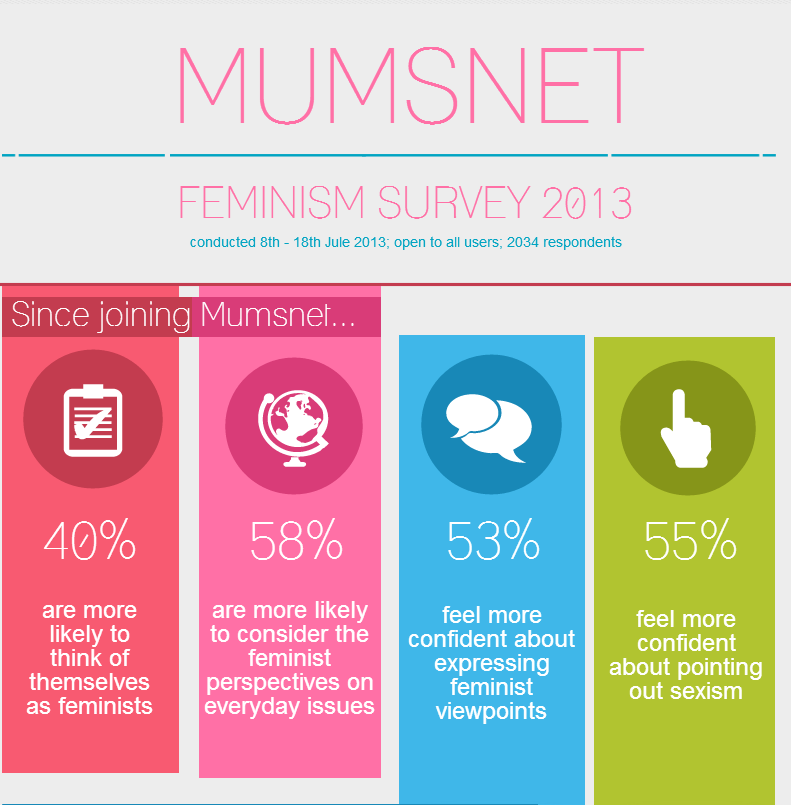 Everyone has an opinion about Mumsnet, particularly people who have never actually explored the site before. I seem to remember becoming aware of this around the time of the last general election, long before I knew much about it, in fact. A lot of mockery was going on: politicians trying to appeal to “Mumsnet types”, having livechats and acting all interested in their concerns. There was justified irritation that some politicians seemed to be making out that the only political issues women are interested in are those relating to motherhood and children, but also plenty of stereotyping of the sort of women who congregate on Mumsnet.

For certain (usually reasonably right-wing) commentators, and most people “below the line”, the site is full of silly, smug, middle class women with “baby brain” talking about their overprivileged, indulgent lives. They have the ability to form a hysterical, bullying mob at any given moment and make the lives of anyone who disagrees with them hell.

For certain feminists, Mumsnet’s frequented by silly, smug, middle class women talking about their overprivileged, indulgent lives and worrying themselves with “trivial” issues as they “moralise” about society, assuming they’re better than everyone else because they have children and attacking those who make different parenting choices to theirs.

As the Guardian report on the survey began to attract attention this morning, it was great to see so many people talking positively about it and acknowledging the work that Mumsnet is doing – through successful campaigns, for example. Yet at the same time (because this is Twitter we’re talking about here): “God help feminism if it’s being represented by bloody Mumsnet,” said others, no doubt envisaging the overprivileged and overindulged being hailed as the new leaders of the movement.

Notable this weekend has been backlash against the Guardian’s inclusion, in the piece, of Ticky Hedley-Dent’s comment (from “a Twitter debate earlier this year”) that “I think Mumsnet is key to understanding feminism. Feminism hardly comes into play until you have kids. Then you get it.” Why are these women insinuating that having children is what really makes you a feminist? Why are they excluding women who don’t have children? This is everything that’s wrong with feminism, people.

I don’t think that particular quote was the best way to illustrate what some of the women interviewed by the Guardian about the survey are trying to say. Of course gender inequality impacts you before you have children or if you don’t ever have children. Who’s going to deny that? But pregnancy and motherhood undoubtedly highlight new issues, and bring to the fore problems that may well have not been a feature of some women’s lives before. No one is saying that you haven’t experienced inequality until you’ve had children. What they mean is that motherhood makes you much more aware of particular issues and aspects of inequality. And for many women, this will undoubtedly have the effect of “galvanising” their beliefs about feminism.

I’ve been meaning to blog about the way that “mothers”, as a group, and their concerns are often dismissed and belittled by both the left and right for being “too middle class” and “trivial” for some time now, because I can’t help but notice it any time someone mentions a campaign that affects children – backlash against the ubiquitous pink/blue distinctions between toys, and the types of toys that are marketed as being “for boys” and “for girls”; backlash against lads mags and Page 3 being easily seen by children in shops; backlash against anything that’s seen as presenting children with harmful messages about sex.

The middle class mother is a prime target for sneering, whether she’s not working outside the home and therefore, apparently, living a pampered life funded by her husband, or else harming her children in myriad ways by “leaving them” to heartlessly pursue a career. It’s a different sort of sneering to that aimed at working class mothers, but the comments aimed at both groups imply stupidity and the idea that their worries and concerns aren’t “real” ones. Why would a woman, in this day and age, choose to define herself at any point by the fruits of her womb? Aren’t we past all that? As I think I mentioned in a post I wrote while on maternity leave, sorry that some of us want to talk about things that are an enormous part of our lives. Some feminists assume that the voices of women who aren’t white and middle class are ignored by these parent-focused campaigns and issues. This is a legitimate concern for those of us who observe the way the media has publicised activism in recent years, but to assume is dangerous and all too often inaccurate.

We Believe You is aimed at busting the victim-blaming myths about rape and sexual assault, was launched amid an overwhelming response to members being encouraged to talk about their own experiences and why they did or did not report them to police or tell friends and family.

Better Miscarriage Care put pressure on the NHS to provide more sensitive and responsive treatment to women experiencing early pregnancy loss. As someone with friends who have had distressing experiences with healthcare professionals while miscarrying, I know this is vital.

Let Girls Be Girls, a campaign that launched in 2010, was a response to growing concern about the way advertising, music, clothing, and magazines encourage a view of sex and sexuality that encourages girls to focus on appearance above all else, tells them that they exist to please boys and men, and tells them that their most important quality is how “sexy” they are.

Bounty Mutiny is asking politicians and the NHS to rethink the fact that Bounty sales reps have a presence on postnatal wards, pressurising women into giving out personal details and invading their privacy at a time that’s at best a time for family, bonding with a new baby, and recovering from labour, and at worst, a time of worry, trauma, and possibly grieving.

I wouldn’t describe any of these campaigns as “trivial” and “silly”. Would you say the same for some of Mumsnet’s forums, where you can find long-running threads on recognising the “red flags” of an abusive relationship, posts offering help and resources to women in abusive situations, and personal support to individuals as they go to the police, walk out on a violent man, or rebuild their lives?

How much do you really know about the boards where women discuss their experiences of assault and rape, support members who are survivors, offer advice on workplace discrimination, and help each other thrash out some of their first, conflicted thoughts about body politics and equality in relationships? Do you really know much at all about all the consciousness-raising discussions? The “shouting back” about everyday sexism? The support for women who’ve gone through miscarriages and stillbirths or are coping with having a terminally ill child?

If you don’t, but your first reactions to discussion of a community of (mostly) mothers online are sneers and “God help feminisms”, then it’s probably time, in the tradition of the internet, for me to direct you to Google, with the instruction that you’re perfectly capable of educating yourself about all this stuff. Mothers are a vital part of your movement and are providing important comment on so many important issues. If you don’t know this because they’re “not on your radar”, ask yourself why.