The blogger Stephen Tovey recently pointed out that zero-hours contracts can work well for both employer and employee. He’s right, of course. I’ll let you into a secret. I introduced zero-hours contracts back in the last century. Did I do it to exploit desperate workers and grind the faces of the poor? Well, not quite. These were very different times. Britain was coming out of recession and the organisation I was working for was in an area with almost no unemployment. The economy was growing at close to 4 percent.  (Yes, kids, it used to do that in the olden days.) Work was plentiful and we just couldn’t find people to take up full-time or part-time permanent roles. We tried putting the wages up but all the other employers were doing that too. There just weren’t enough people looking for permanent jobs. Zero-hours contracts was a way of trying to solve our labour shortage.

I remember not being entirely convinced that it would work but we decided to give it a go anyway. (Evidence-based management this wasn’t but we had to try something.) The unions were a bit dubious but, once we’d persuaded them that we were not trying to replace full-time workers, that getting the extra help would relieve pressure on the permanent staff and that having our own pool of casual workers would stop us having to pay fees to grasping temp agencies, they were ok with it. In the end, the new contracts were a great success. They opened up opportunities for people who would not otherwise have been able to work and gave the employer access to a whole new supply of labour. As I remember, there was very little complaint from either the managers or the staff. For the most part, zero-hours contracts seemed to work well both for employer and employee.

An interesting story, perhaps, but enough of the anecdotes. What does the data say? Well, the picture is not entirely clear.

Some of it seems to support the view that many people are happy with zero-hours contracts. According to a study by the Work Foundation earlier this year, 80 per cent of people on zero-hours contracts are not looking for another job. Only 26 per cent of them said they wanted longer hours, which implies that around three-quarters are content with their current work pattern. To put this in perspective, the Work Foundation reckoned that 200,000 people were employed on zero hours contracts, which is only 0.7 per cent of the workforce, so we are not talking about a massive group of people.

However, more recent studies suggest that these figures might be on the low side. Research by the Resolution Foundation concluded that 200,000 was almost certainly an under-estimate and a parliamentary reply last month put the number at 307,000 in the social care sector alone. This paper from Leeds University found that in 2012, nearly 60 per cent of care workers and around a quarter of their managers and supervisors were on zero hours contracts. It is likely, then, that the 0.7 per cent figure is a conservative estimate.

What most studies seem to agree on is that the number is rising. As the Work Foundation’s figures show, the use of zero-hours contracts broadly reflects the state of the economy. 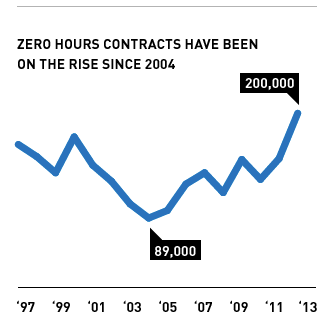 The numbers fall as the economy improves, there is a slight rise during the slowdown of the early 2000s and then a steep rise during and after the financial crisis. This suggests that firms are, to an extent, using zero-hours contracts to avoid making the commitment of taking on permanent staff when orders are volatile and uncertain.

Zero-hours contracts are used predominantly for unskilled or semi-skilled labour. The further you go up the income scale, the less likely you are to be on one. 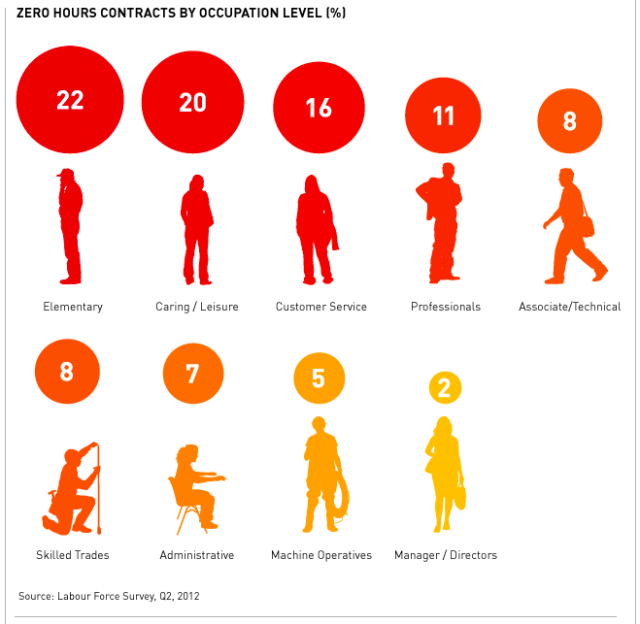 The relatively high figure for professionals looks like an anomaly but I suspect it conceals a wide variation in earnings. In the professional occupations, part-timers earn, on average, higher hourly rates than their full-time counterparts. Among some of the professionals on zero-hours contracts are probably a few very highly paid people who work when they feel like it and others who have been made redundant and have joined the growing army of desperate odd jobbers.

And this probably reflects the wider pattern. Zero-hours contracts are like part-time work, temporary work, interim contracts and self-employment. When the economy is good and there is plenty of employment, they give people more flexibility to work when and where they like. For those with highly marketable skills, income from a variety of sources or a spouse as the main earner, they enable people to pick and choose the sort of work they do.

On the other hand, when the economy is in the doldrums and the workforce under-employed, zero-hours contracts mean uncertainty and fear. For those with lower skill levels or for whom the zero hours job is the main household income, the precariousness of their situation can be terrifying.

There is evidence that, in some areas, the element of choice in the zero-hours contract has almost disappeared for the employee. The Resolution Foundation found that employees faced the threat of ‘zeroing-down’ – so if they refused to work then they wouldn’t be offered work in the future. The study concluded:

[I]t is clear that for the majority of those employed on zero-hours contracts this freedom and choice are more apparent than real. For those individuals who require a minimum number of working hours per week to ensure their family is financially secure or those who, confronting severe power imbalances in the workplace, fear that turning down hours as and when offered will result in future work being withdrawn, life on a zero-hours contract is one of almost permanent uncertainty.

It is for these reasons that some, like Labour’s Andy Burnham, have called for a ban on zero-hours contracts. That would be a bit premature though. It’s rather like the ban on contractors in government which was proposed last year. Banning something that works well for some people just because others are abusing it doesn’t make sense. Zero-hours contracts serve a purpose, just as interims, part-time workers and contractors do. In any case, some employment lawyers reckon that an outright ban would be difficult to implement.

There is clearly still a lot we don’t know about the extent of zero-hours contracts and how wide-ranging the abuse associated with them really is. Vince Cable’s review is therefore a good start, though some have called for a more detailed investigation.

There’s a more fundamental point here though. Zero-hours contracts are being used to exploit people for the same reasons that wages are being held down, in-work benefits have gone up and self-employment is at record levels. The economy is in the doldrums, the workforce is under-employed and the balance of power between employer and employee has swung in the employer’s favour. Like so many other aspects of the labour market, the exploitation of people on zero-hours contracts is a symptom of the wider economic collapse. Ban zero-hours contracts and the problems associated with them will probably re-appear in another form.

Flip Chart Rick is the author of the Flip Chart Fairy Tales blog, where this post originally appeared.