I don’t know who is advising Ed Miliband but “public spending back to 1930s levels” wasn’t a good line.

It’s true that the Conservatives’ proposed cuts take public spending to its lowest percentage of GDP since the ONS records began but it has been at similar levels in the recent past, notably under Tony Blair in 2000. 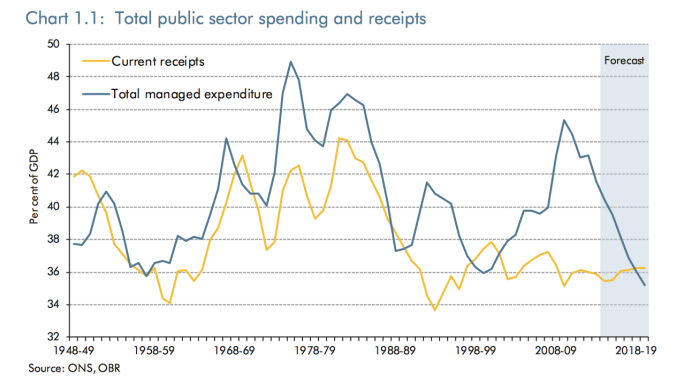 Inevitably, therefore, people would say “Well it was like that under your lot and the world didn’t fall apart.” That’s pretty much what Robert Peston skewered him with in an interview yesterday and what John Rentoul was tweeting all afternoon. 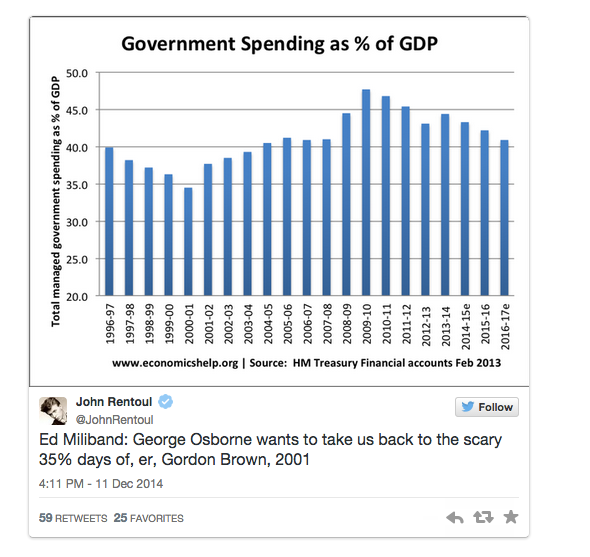 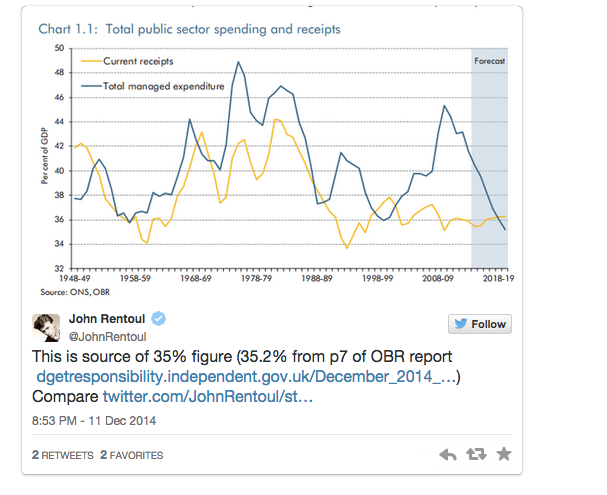 But quoting overall  levels of spending to GDP misses the point. It was a very different world in 2000. Nowadays we have pressures on public spending that didn’t exist back then. Increasing pensioner benefit costs, state-funded low wage jobs and subsidised housing leave us with a seemingly intractable social security bill. That and the rising public debt payments eat up a lot of our public spending, so, without tax increases, the cost of deficit reduction must fall on public services. (For some detail behind this see here and here.) 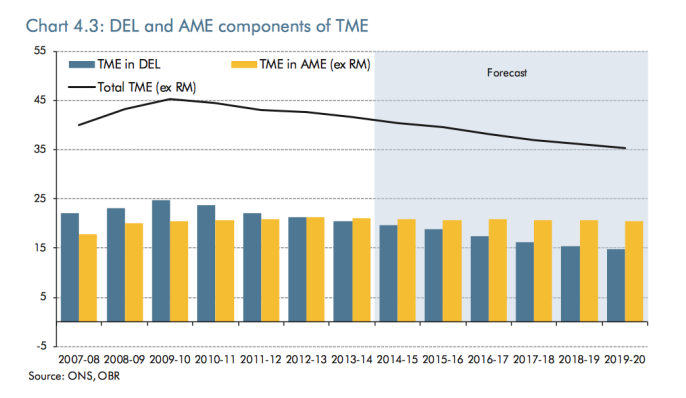 The result is that a 4.7 percent real-terms cut in overall spending since 2010 becomes a 25 percent cut in public service spending. Take out capital spending and look at day-to-day service spending and the cut rises to 27 percent. But the population is rising too so that translates to 31 percent per capita. Because some departments are protected and have their budgets maintained, everything that isn’t health or education faces cuts of around 57 percent. An overall cut of just under 5 percent therefore gets amplified because of other spending pressures.

That might be a bit too complex a message to reduce to political soundbites but three charts from the OBR report last week make the government’s plans very clear.

1. Public service spending falls to its lowest level since 1938

This is the opposition’s 1930s message. It’s not public spending, it’s publicservice spending that falls to 1930s levels 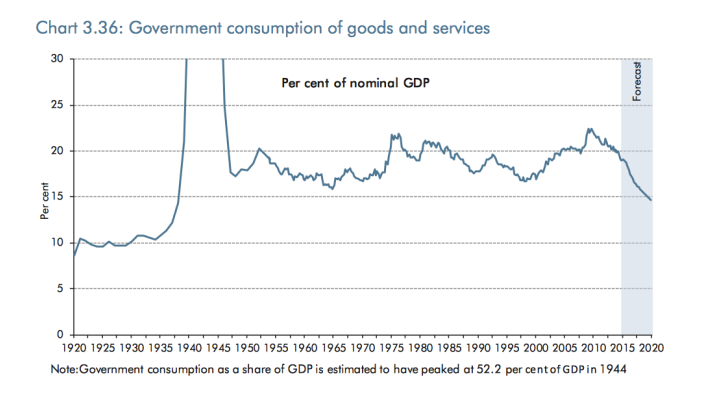 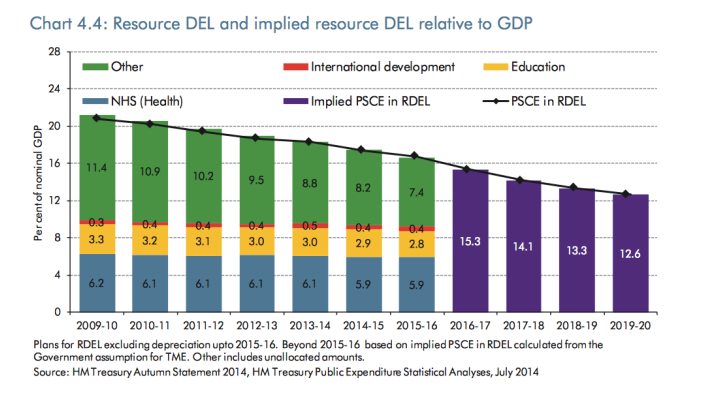 The ONS records don’t go back far enough to find a time when day-to-day spending was at 12.6 percent of GDP. This amounts to real-terms per capita cuts of a third at a time when an ageing population means the number of people needing help from the state is increasing.

3. Spending on everything outside health and education is cut by more than half

Because health and education are protected (and international aid but that’s piddling), real-terms per-capita cuts to everything else are close to 60 percent.

It’s clear from this that a lot of local government services will simply cease to exist. 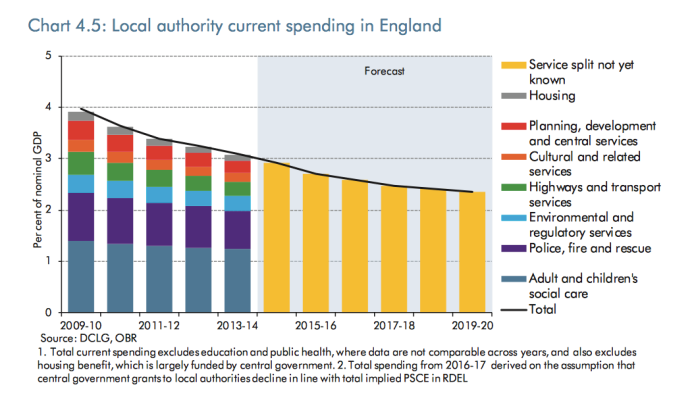 No wonder, then, that the Chief Constable of Lincolnshire is warning that his force will fall apart within the next few years.

And that’s pretty much it. Ed Miliband shouldn’t get into discussions about overall public spending because it doesn’t look as if it falls by very much (5 percent doesn’t sound a lot) and it was at similar levels relative to GDP when his lot were in power. He should, instead, focus on the threat to public services.

Last week, George Osborne was rattled by comments from the Institute for Fiscal Studies and, by implication, the forecasts of the OBR. He will probably be less rattled by Ed Miliband’s speech.

Simply by stating the implications of his plans, impartial (or as near is it gets) technocrats are landing stronger punches on the Chancellor than the leader of the opposition. If Ed Miliband is to have a hope of winning the election, he needs to make his punching sharper.

Update: Maybe I’m being a bit harsh. Ed Miliband did say 1930s public services spending at one point in this speech but it then gets muddied by references just to 1930s public spending. He also didn’t make the distinction when Robert Peston questioned him on it.

This article was originally published on the blog Flip Chart Fairy Tales, written by @FlipChartRick