Kylie Jenner is “seen posing up against a rusty old truck” with her sister, Kendall, in their “flirty white dresses.” With “much longer limbs” than their more famous siblings they “made the most of their trim pins”. Later, Kylie changes into an olive-green gown “which is skimpy around the bust area”, and “works her magic in front of the camera”. She has less modelling experience than Kendall, a swimsuit model who “is envied by millions of girls … for her lithe figure,” but is catching up, and loves “posing for the cameras”.

She is the daughter of Olympian Bruce and Kris Kardashian, and stepsister to Khloe, Kim, Kourtney and Rob. Her sister, Kendall, recently turned 16. The quotes above are all taken from a single Mail Online article, which is just of one of dozens written about the young girls. A more recent headline reports that they “don tiny wetsuits for a day at the beach”. The article is based on a picture that Kendall posted on Twitter; it was spotted by the all-seeing Daily Mail Reporter, who apparently felt that 14- and 16-year-old girls wearing “very short wetsuits” would attract clicks. 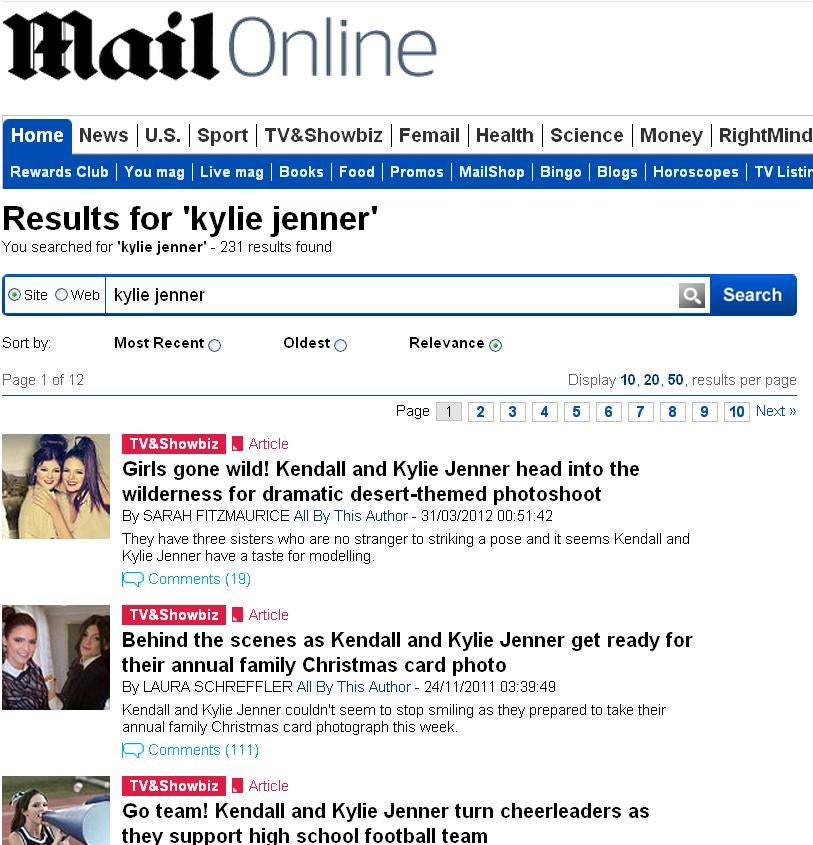 What is the meaning of North Korea’s nuclear opportunism?

Elsewhere on the site, six photos appear of the “teen bikini queens” soaking up the sun. Daily Mail Reporter describes them as “exhibitionists” who “display maturity and a lifestyle far beyond their years”. Fourteen-year-old Kylie is “not exactly shy!” as she “gets dressed in full view of passers-by”, an image Mail Online editors feel must be shared with the world. Days later, Daily Mail Reporter is shocked – shocked! – to find that the Kardashian family have included the two girls in a “raunchy home music video”. The “sexually-charged” performance features “teenagers Kendall and Kylie dancing suggestively in skimpy bikinis” and “shaking their bottoms for the camera”. The Mail show a picture of the girls, captioned “Too young?” In case readers still aren’t sure, they helpfully provide the full video too.

Of course the Kardashians court publicity. The Kardashian name is a brand, and the family are a business built around the meticulously stage-managed performances of people who have chosen to live life as low-brow art. One can criticise adults for making that choice, and say that they deserve to reap the consequences of their actions; it is not so easy to dismiss the plight of a 14-year-old girl who – like any princess destined for a throne – has her choices made for her. Her family created the photo opportunities, photographers decided to take pictures of her posing in a bikini, picture agencies bought and sold the snaps, and newspaper editors chose to run them. At no stage in this celebrity industry assembly line does anybody seem to have considered whether it was appropriate to exploit a child in this revolting fashion.

At 14, Kylie has come late to celebrity. Six-year-old Suri Cruise, daughter of Tom and Katie, has been featured in more than six hundred Daily Mail articles – almost one for every three days of her life. In 2010 the Mail reported that the “four-year-old was spotted snuggling up in her pink ‘blankie’,” observing that: “the comforter has been a constant feature in little Suri’s A-list jetset life, and it seems that she isn’t quite ready to give it up”. If this seems ‘cute’ to you, imagine this sort of obsessive media scrutiny applied to you or your child at the same age. No wonder that in 2008 the Mail could report that: “Suri Cruise may be only two years old but it seems the toddler has already developed a dislike for photographers.”

The next stage, surely, is for the intrepid Daily Mail Reporter to venture through the vaginas of pregnant celebrities with a microphone and a handycam, in order to rank the relative cuteness of famous foetuses. Of course MailOnline’s editor, Martin Clarke, told the Leveson Inquiry that “we don’t report pregnancies unless confirmed by the subject”, but as TabloidWatch reported recently they’re happy to cover rumoured pregancies; whether revealing that Megan Fox is “still staying mum” about her “growing ‘bump’,” or asking whether Gisele has “something to hide?” Clarke and his competitors are leading us into a brave new world where people can be celebrities from conception to grave.

As worrying as this is, it is the treatment of teenage girls that is most worrying. The Jenners are far from the only targets – Jimmy Saville-Row at Vice Magazine recently highlighted, the Mail’s alarmingly frequent use of the phrase “all grown up” to describe adolescents, to which I would add the equally creepy “older than her years”. The coverage of Kick Ass star Chloe Moretz at the age of 14 contains some classic examples: looking “all grown up” she was “every inch the classy young lady” at a film premiere, for example. All this comes from a newspaper campaigning vigorously against ‘sexualisation’ and its impact on children.

Remarkably, there is nothing in the PCC code to stop Mail Online publishing images of young children accompanied by such commentary. Section 6 of the code, focusing on children, says that “young people should be free to complete their time at school without unnecessary intrusion” and that editors “must not use the fame, notoriety or position of a parent or guardian as sole justification for publishing details of a child’s life”. In the case of Kylie Jenner, a celebrity under construction placed firmly in the public domain by her parents, neither rule really applies. That is a state of affairs the Leveson Inquiry would do well to consider. If Paul Dacre’s concerns about sexualisation are genuine, then perhaps he might like to consider it too.

Martin Robbins is a writer and researcher. Find him at The Lay Scientist or on Twitter: @mjrobbins