As befits a fishing village set on the claw of Cornwall, where the cliffs fall into the Atlantic, the celebrated ­artists’ colony at St Ives has seen more than one wave of artists roll in. In the late 19th century, James Whistler and Walter Sickert were among those who went there to work, while the naive fisherman-painter Alfred Wallis was native to the area. After the First World War Ben Nicholson discovered the place and in 1939 moved there with his wife Barbara Hepworth. The couple, when joined by the sculptor Naum Gabo, made the town the most unlikely but fecund seedbed for British modernism. After the war, their presence lured some of the most innovative painters of the younger generation to St Ives, including Patrick Heron, ­Peter Lanyon and Terry Frost.

The artist who bridged these last two generations was Wilhelmina Barns-Graham (1912-2004), and she turned out to be not only the longest lived but the most varied of them all. She was perhaps also the most unjustly neglected, struggling for almost half her career to escape the persistent tag of being a second-ranking “St Ives artist”. Barns-Graham painted in so many different manners and places that she might with equal justice also be called, among other things, a “Scottish artist”, a “Lanzarote artist”, a “Swiss glacier artist”, or, as she once referred to some of her abstract pictures that used rhythms of circles, a “tiddly-wink artist”.

“Willie”, as she was usually known, was born into an impoverished, genteel and stick-in-the-mud old Fife family. Her father was strongly entrenched against an artistic career but, she claimed, she knew that she wanted to be a painter from the age of eight. It was an aunt who paid for her to attend the Edinburgh College of Art, though her time there was protracted by interruptions caused by ill health (she had perennially weak lungs and contracted pleurisy).

When, in 1939, she won a travelling scholarship, Europe was already closed off by the war so she headed instead to St Ives. She chose it for the avant-gardism of Nicholson and Hepworth; for the sake of her health; and, she said, “to get away from my family”. Barns-Graham arrived in 1940 and would keep a studio there for the rest of her life.

The art politics of St Ives in the 1940s and early 1950s often turned bitter as factions formed within both modernist and traditionalist camps. There was a certain amount of peacocking and jostling for attention and Barns-Graham was too reticent to thrust herself to the fore. Like most of the younger artists there, her pictures edged the Cornish landscape into abstraction. She was a gifted draughtswoman and learned about clarity of design and line from Nicholson in particular, which suited her penchant for architectural subjects: at one point she was known as Wilhelmina Balustrade-Graham.

She found a measure of success too: in 1950 Herbert Read, the éminence grise of modern art, included her painting Upper Glacier in his book Contemporary British Art. She had work purchased by the British Council and exhibited at some of London’s leading galleries. Nevertheless, she seemed to lack the confidence to push ahead and, enervated by a failing marriage to the ­writer and architect David Lewis, she largely ­disappeared from critical view from the late 1950s for the best part of 25 years.

She carried on painting though – mostly increasingly geometrical and colourful abstracts – and in 1960 she inherited a house outside St Andrews from Mary Niesh, the aunt who had put her through art school, and started to spend her summers in Cornwall and her winters in Scotland. This painting, West Sands (St Andrews), July, was made near her Scottish home in 1981 in the period just before her painting and reputation took a late upswing. It looks back to the pared-down linearity learned from Nicholson, while the washed sky offers a dawn hint of the vivid colours she was soon to use. 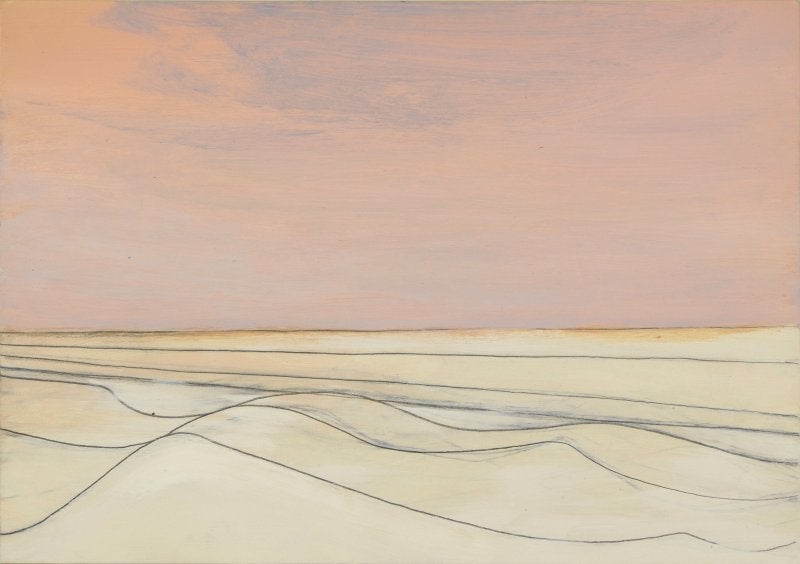 Courtesy of the Wilhelmina Barns-Graham Trust

Barns-Graham said of her abstracts that: “Painting is a pattern, and paintings should be just as good upside down, sideways, in a looking glass…” and her words almost hold good here – turn the picture upside down and you see hills above pink water. This is, though, a painting about essential forms, a still scene which has been stripped back to just an empty sky and wave-rippled sand. The sea itself has receded beyond the horizon and nature itself is reduced to patterns. It is perhaps precisely these formal concerns that give the picture its meditative and spiritual mood.

Throughout her 60-year career Barns-Graham focused on the craft of painting. When she said that “I want my work to be a simple statement” she meant about the ­relationship between form and colour. But, almost despite herself, her simple statements can engender complex feelings.

This article appears in the 08 Jul 2020 issue of the New Statesman, State of the nation