Emily Carr (1871-1945) was for her own time, or indeed any time, a remarkable woman: a pioneering painter, ethnographer and proto-conservationist who was determined to live and paint in her own way. The majority of her life was spent on the Pacific coast of Canada, as distant from the wellsprings of contemporary art as was possible. Nevertheless, she depicted the rainforests and indigenous peoples of Vancouver Island and Alaska in a thorough- going modernist manner and her work could be strikingly avant-garde. It can be disconcerting to find echoes of cubism or futurism in paintings made thousands of miles from the stylistic squabbles of Europe’s cultural heartlands.

Carr is sometimes likened to Georgia O’Keeffe, who found in the scrublands of New Mexico a similar connection to a pre- Columbian world, but whose pictures were more overtly mystical. Carr, for all her eccentricities (she kept a pet monkey that would sit on her shoulder) was also a no-nonsense boarding house owner and dog breeder.

She was nevertheless a reluctant outsider: “I don’t fit anywhere, so I’m out of everything and I ache and ache,” she wrote. “It’s dreadful – like a game of musical chairs. I’m always out, never get a seat in time; the music always stops first.” This applied to her personal life too: she never married and her closest companions were her sisters. Artistically, while she wanted to play a part in the developments of the time, her instincts pulled in a different direction.

But Carr was perhaps closer to one of the driving forces of modern art than she initially realised. In the first decades of the century, the art of Africa and Oceania had a profound effect on artists from Picasso to Modigliani. They knew it from examples in museums of anthropology, and the masks and figures bought from specialist shops in Paris. Carr on the other hand was intimate with indigenous – or what was then called “primitive” – culture. And where the Europeans saw these artefacts as offering new possibilities for creating powerful forms, Carr recognised them as parts of an ancient but living tradition. She put it another way: “I was as Canadian-born as the Indian but behind me were the Old World heredity and ancestry… I had been schooled to see outsides only, not struggle to pierce.” She taught herself to pierce. 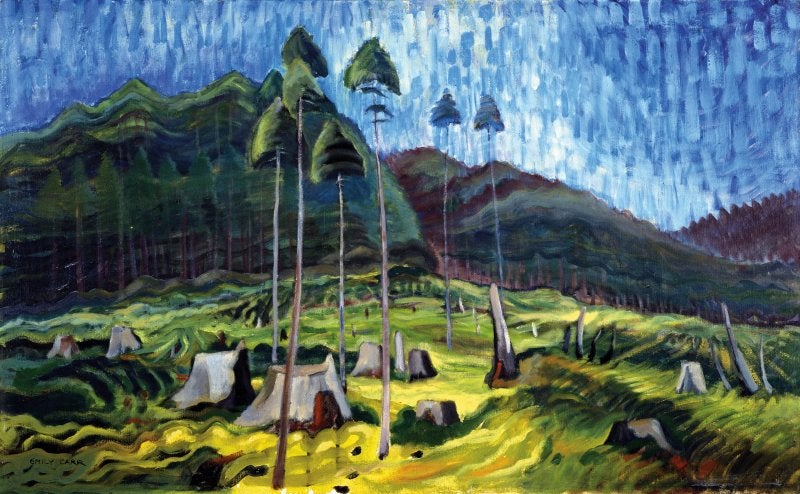 To understand nature, she said, “I clung to earth and her dear shapes, her density, her herbage, her juice. I wanted her volume and I wanted to hear her throb”, while to understand the land’s original inhabitants she made several journeys to study and record the life and customs of its tribal peoples, going so far as to adopt the First Nations name Klee Wyck (“the laughing one”). However, she also travelled in the opposite direction. She studied in both London and Paris – where she encountered the colour-heavy works of the fauves and post-impressionists – and visited the artists’ colony at St Ives, as well as spending 18 months in a Suffolk sanatorium after a breakdown.

The European influence is clear in Odds and Ends of 1939 (in the Art Gallery of Greater Victoria, her home town), in the wave ripples of the land and the dashes of the sky. “Movement is the essence of being,” she once wrote. “When a thing stands still and says, ‘Finished,’ then it dies.” And this still scene of deforestation is full of movement.

It is nonetheless an elegiac picture. Although Carr was brought up a strict Presbyterian by her English parents, she became increasingly interested in Theosophy, and began to identify her spiritual instinct in nature and in trees in particular. Trees, she said, “are better than we humans. They are more obedient to God and recognise him clearer.” Just as she took the dissolution of indigenous tribes through disease and encroachment personally, so she abhorred industrial logging. Where native peoples had reverence for the natural resources they used, organised despoliation had its eyes open to profit but was blind to nature.

Just as Paul Nash had done in his paintings of the First World War battlefields, the stumps in this painting are both arboreal and human: it is a way of living harmoniously with nature that has been cut down. Odds and Ends is one of several paintings she made in the 1930s on this theme, but this is the most anthropomorphic. Carr was an accomplished writer and one of her most vivid passages describes the “torn and splintered ridge across the stumps I call the ‘screamers’. These are the unsawn last bits, the cry of the tree’s heart, wrenching and tearing apart just before she gives that sway and the dreadful groan of falling, that dreadful pause while her executioners step back with their saws and axes resting and watch.”

These screamers, which tellingly she feminised, stick up “out of their own tombstones… They are their own tombstones and their own mourners.” For all the bright, cheery blue sky and sunlit grass, and despite the cluster of trees left standing – or perhaps just waiting for the axe – this is a painting of a killing field.