There is no Mount Cézanne, although he painted the Mont Sainte-Victoire obsessively, and nor is there a JMW Turner Mountain, even though high places – from the Alps to the Yorkshire moors – fill his pictures. In upstate New York, however, 120 miles due north of Manhattan, stands Thomas Cole Mountain. There is nothing particularly remarkable about this wooded pimple in the Blackhead range – at 1,204 metres it is only the fourth highest peak in the Catskills – although there is about the man after whom it was named.

Thomas Cole (1801-1848) was an English-born American painter who became both his adopted country’s first notable landscape artist and the founder of its first notable art movement, the Hudson River School. If the photographer Ansel Adams is the most celebrated US artist-environmentalist, it was Cole who first gave visual form to the idea of an American arcadia and who warned that man was this pristine land’s greatest enemy.

Having been born in Bolton in Lancashire and seen the Luddite rioters burning the cotton mills, he ended his days, dead of pneumonia at 47, in a small town on the Hudson River, fearing that industrialisation and all its ills would reach there too. “The bright and tender flowers of the imagination shall all be crushed beneath its iron tramp,” he warned. Cole was part of a defined strain in Anglo-American art: while Benjamin West (second president of the Royal Academy) and John Singleton Copley crossed the Atlantic to make successful careers in London and stayed, Gilbert Stuart (creator of the portrait of George Washington on the $1 bill) returned home after 18 years in Britain to paint the great men of his newly independent country (including its first six presidents). What Cole did, however, was to import an entire sensibility, European romanticism, to the new world. In his 1867 study of America’s artists, Henry T Tuckerman claimed: “To [Cole] may be directly traced the primal success of landscape painting as a national art.” He showed America to the Americans.

This influential painter’s work is little known in Britain, something “Thomas Cole: Eden to Empire” at the National Gallery hopes to put right. The exhibition also hopes to undo some of the jingoism that surrounds his name by depicting him as a global artist and man of his times rather than simply a specifically American painter. 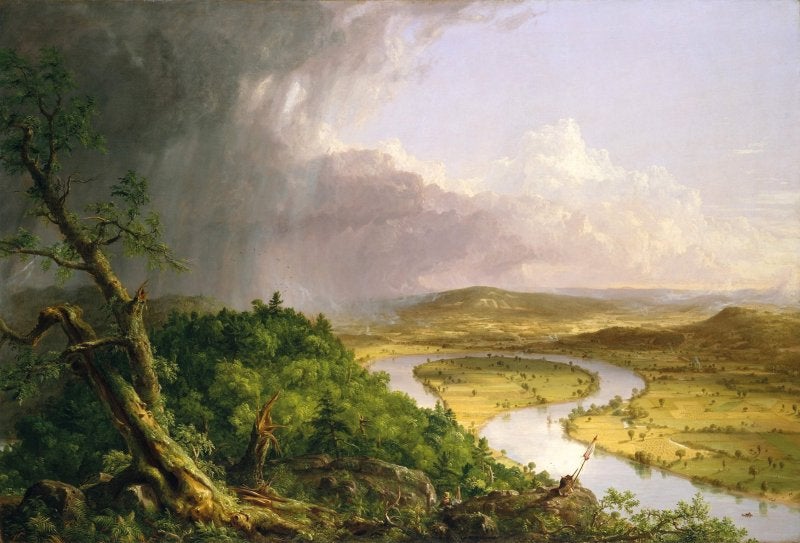 View from Mount Holyoke, Northampton, Massachusetts, after a Thunderstorm – The Oxbow (1836)

Cole arrived in the US in 1818, when his father, a textile manufacturer, travelled there with the family in the hope of making a new life. Thomas, then 17, had already worked as an engraver of cotton printing blocks for the mills and had absorbed the theories of the sublime and picturesque that had been prevalent in British landscape painting for nearly 50 years. Once in Pennsylvania he set about learning how to become an artist. It was not until 1825, however, when he visited New York and discovered the Hudson Valley, that he found his subject. “Nature has shed over this land beauty and magnificence,” he later wrote, “and although the character of its scenery may differ from the old world’s, yet inferiority must not therefore be inferred.”

Just how magnificent he found the virgin landscape is captured in a painting of 1828 called The Garden of Eden, an amalgam of every type of American topography, from vertiginous peaks, to waterfalls, fertile plains and tropical luxuriance. Huge gemstones sparkle in pools, deer roam, bulbous plums drip from branches, flowers escaped from a Jan “Velvet” Brueghel painting bloom in psychedelic abundance and the tiny figures of Adam and Eve throw up their hands in worship to God – or the sun, or both – all painted in miniaturist detail. The picture sums up Cole’s intention to produce “a higher style of landscape”.

Such depictions of both the American Eden and the American wilderness (including five paintings illustrating his friend James Fenimore Cooper’s The Last of the Mohicans) won Cole a circle of eager patriotic collectors. In 1829, however, he sailed to Europe to further his artistic education. Already familiar with the dizzying apocalyptic paintings of John Martin through mezzotints, in London he saw the real things. He also met both Constable and Turner (who looked, he thought, like “a mate of a coasting vessel”) and took from the former the art of sketching in oils in the landscape, and from the latter the drama of his atmospherics. In Italy he learned figure painting at the Academy in Florence while the Roman campagna, as painted by Claude in the 17th century, transfixed him. Meanwhile, the picturesque decay of classical ruins taught him – the product of two cultures, one an empire in its pomp, the other aspirant – about the fate of all great civilisations.

When Cole returned to America in 1832 he found a changed country. Under the presidency of Andrew Jackson, who stood for the “common man” against the “corrupt aristocracy” ruling the swamp (the contemporary echoes are inescapable), America had become increasingly expansionist, urbanised, industrialised and partisan. A dismayed Cole wrote that: “It appears to me that the moral principle of the nation is much lower than formerly” and predicted “the downfall of pure Republican government – its destruction will be a death blow to Freedom.” Nevertheless, in 1834, in his determination to do his bit from the inside, he took American citizenship.

The influences of his European trip and the state of his nation came together in a suite of narrative pictures, The Course of Empire, a project he had conceived in London. The cycle shows the development of a civilisation from birth to death in five paintings: The Savage State; The Arcadian or Pastoral State; The Consummation of Empire; Destruction; and Desolation.

The scenes are all set in the same place, an estuary overlooked by a triangular mountain topped by a boulder – a setting that is the immutable witness to the rise and fall of the comédie humaine that unfolds before it. The first painting shows a brutal and primitive world in which a hunter chases a deer through a wild landscape and a group of Native Americans gather round their tepees (a reference to Rousseau’s “noble savage”). In the second picture the landscape has been tamed and a rudimentary civilisation has emerged: a Stonehenge-like temple signifying the birth of architecture (a subject of current debate, driven by architects such as William Chambers) stands on a promontory; a philosopher sits scratching geometrical designs in the earth; girls dance to a piping shepherd; and a man and an ox plough a field. And so on through a glittering procession in an imperial city, whose composition mimics Claude’s 1641 Seaport with the Embarkation of Saint Ursula that Cole had seen in London; whose buildings bear an uncanny resemblance to John Nash’s Regent’s Park terraces and whose processional elephants hint at the durbars of British India as much as the triumphs granted in ancient Rome. The city then falls in a bloody and fiery conflagration in the face of an invading barbarian army. The last of the sequence, Desolation, is a moonlit scene of ruins devoid of human life, the glory of the past has crumbled to mere broken ivy-covered stumps. 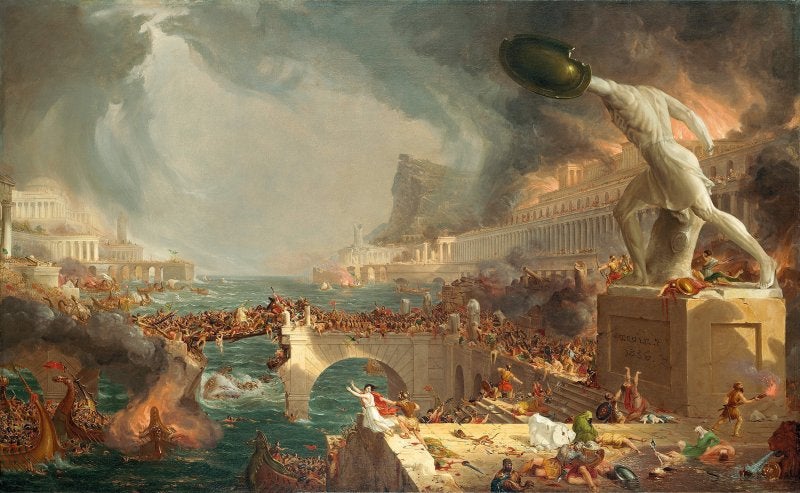 The Course of Empire: Destruction (1836)

Cole’s message was unequivocal: this is what happened to the Roman empire, it is what will happen to the British empire and, the way things are going, it will happen to the US, too. Fenimore Cooper called the pictures, with their thrilling and chilling mix of sensation and prophesy, “the work of the highest genius this country has ever produced”. Cole’s countrymen relished the frisson the pictures gave them and the son-in-law of Cole’s patron informed the artist that their exhibition would “clear for you nearly $1,000 in cash and a Million in fame”.

If these paintings were all about the inherent self-destructiveness of man, Cole was just as concerned with the fate of nature. He took a break from painting The Course of Empire to work on a large allegorical landscape called View from Mount Holyoke, Northampton, Massachusetts, after a Thunderstorm – The Oxbow (1836). It is no mere view: the left-hand side of the picture shows wild, wooded hilltops under a lowering sky while the right-hand side shows the tight bend of the oxbow river and a vista of carefully tended fields bathed in sunlight.

One part, therefore, shows the sublime, the other the picturesque; one nature in the raw, the other nature tamed; although God is present in both, Cole wished his meaning to be clear. His countrymen should beware of the urge to tame the landscape: “the ravages of the axe are daily increasing – the most noble scenes are made desolate”. And to make it clear that he intended to act as a prophet-painter, he included a tiny self-portrait of himself at work at the point where the two aspects of the painting meet.

It is not his first self portrait. In Desolation, the moon that surveys the ruinous post-human scene has a face, and it is winking. Now, as Donald Trump rolls back environmental protections, shrinks national parks and promotes fossil fuels it seems that the winker is Cole, saying “I told you so.”

Newsletters from the New Statesman View all newsletters
Subscribe for the best of our politics, international affairs, culture and business coverage, straight to your inbox
THANK YOU
Topics in this article : Artists