George Mpanga was born in London in 1991. A poet, rapper and spoken-word artist, his podcast, “Have You Heard George’s Podcast?”, won a Peabody Award in 2020.

As a baby too small to walk, watching my older brother, wanting to make my legs do what his were doing, and not being able to.

Malcolm X, 2Pac, Nas, Jay-Z, Muhammad Ali. They demonstrated the ability to change their mind, which is not easy – especially when all eyes are on you.

Why Nations Fail by Daron Acemoglu and James A Robinson. It looks at how the formation of institutions across the world had a big impact on the outcomes of what later became nations. No matter what black population we’re talking about, I’ve always had it in the back of my mind that they face similar challenges. That’s deeply disturbing when no one explains why. This book gave me the language and ideas to allay some of those insecurities. 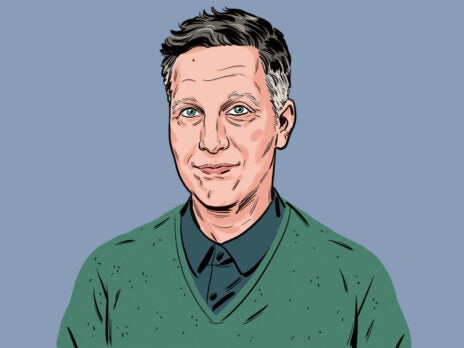 David Shrigley Q&A: “I’m getting weak in my old age. I should start lifting weights”

Barack Obama. For a long time, I found it difficult to say that, because of my feelings around politicians in general. Now I feel more aware of the playing field that Obama entered. He’s the politician I relate to most. How crazy is that?

The life of Jay-Z – his music is quite autobiographical. I first heard about him on a trip to Uganda when I was eight, around the time he had a song on the Rush Hour soundtrack. I saw a poster of him on the wall of a barbershop in Kampala, but I didn’t take his music in until about five years later.

In Uganda in the 1950s. Independence was on the horizon, there was hope – and I could have done something with that.

The Wire. I know it’s Jay-Z’s favourite too.

Kelvin Okafor, a London-based artist. I didn’t know it was possible to capture life with pencils and paper like he does.

“Keep Ya Head Up” by 2Pac. It’s the undercurrent of my feelings around my community: to persevere and focus.

My mum told me that service to others is the best thing you can do with your life. I made decisions about who to become by figuring out who I could help the most.

If all governments listened to Mariana Mazzucato – just ten minutes of their time.

When I proposed to my fiancée in December.

A teacher – probably of sociology. The subject teaches you to critique, analyse and contribute to society.

No. Every single day a child is born, and we have no way of knowing what great idea one of these kids is gonna come up with – but it’s coming.

George the Poet’s “Black Yellow Red”, a short film about the 2021 Ugandan general election, is available on YouTube