The visible part of a lightning strike is just a fraction of the total flash. The bolt seen above appears to extend from the cloud directly above the Washington Monument – but it actually begins almost 15km away, in Rockville, Maryland, and is part of a total network spanning 80km and spread over an area of 500km2, according to the Washington Post‘s Kevin Ambrose:

The flash initiated ~22,000 feet above Landover, Md., before striking ground in the District near Brookland and again near Rock Creek Park. The flash was well over 50 miles long. The upper branches propagated horizontally at ~40,000 feet all the way west to Rockville, Md. 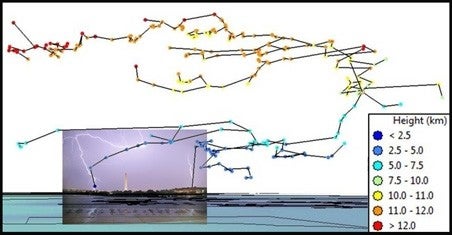 Is Boris Johnson ditching nature to save his skin?

Every day the natural world reveals its intelligence, but humans choose to ignore it

The barrister who became a badger: why did Charles Foster decide to live like an animal?

The Post also has more detail of the methodology, as well as a 3D model of the full strike.