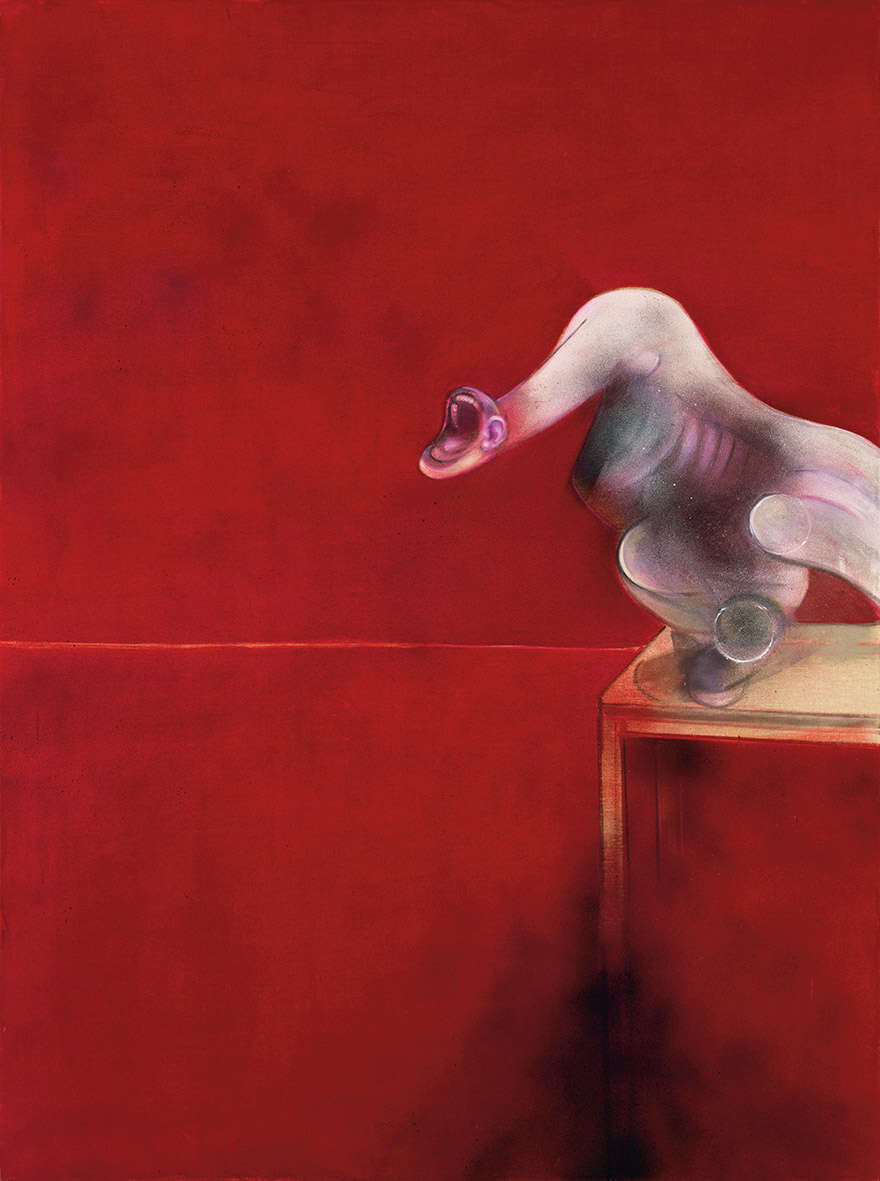 Francis Bacon was born in the first decade of the 20th century and died in the last, and throughout his long life he refused to explain what his paintings were about. That his pictures express something meaningful, universal and profoundly disconcerting is irrefutable, but he shut down explanations with the curt if nonsensical assertion that his work “meant nothing” just as life itself was meaningless: “There’s nothing, see. Nothing. Nada. Just nada.”

Bacon may not have known exactly what was going on when he put brush to canvas, but he had lived through two world wars, was born just nine years after the death of his hero Nietzsche and belonged to the generation of Samuel Beckett, Albert Camus and Jean-Paul Sartre. A combination of nihilism, personal agency and violence was intrinsic to both his art and his “gilded gutter life”, with its epic drinking, its rough-trade lovers and its sadomasochistic sex. “Life is nothing but a futile series of moments,” he once said, “so the more intense they are the better.” His paintings are expressions of that intensity.

Explaining his art was perhaps the only area in which Bacon was reticent. In or out of his cups he was a talker, and one of the things he told his friend and biographer Michael Peppiatt was his conviction that “we are all animals… It’s just that some people are more aware of the fact than others. I think I’ve been very aware of it ever since I was a child.” Bacon grew up with horses; his father was a racehorse trainer in Ireland and animals quickly became a part of Bacon’s tangled psychosexuality. He not only had sexual feelings for his father, but when Bacon père ordered his grooms to give his son an occasional thrashing to cure his effeminacy, the medicine wasn’t unwelcome. Years later he would state that “I don’t like the smell of horse dung, but I find it sexually alluring, like urine.”

Animals also represented danger; they exacerbated Bacon’s childhood asthma, for which he received morphine injections. Indeed, when Bacon was called up during the Second World War, he avoided conscription by hiring an Alsatian from Harrods’ pet department the night before he was due to appear in front of the military board, so that when he presented himself, wheezing and gasping, he was rejected for active service.

Animals fascinated him too because they didn’t have inhibitions. “If you watch them you can see exactly what they’re like,” he said, “whereas most people live a kind of veiled life and tend to disguise what they are, what they want, what they really feel.” It was why, he told Peppiatt, he found people such as the Kray twins so appealing: “I don’t actually believe people should go around what’s called cutting their victims’ throats – or kicking them to death, come to that. At the same time people of that kind can be more interesting, or at least more unusual, because they go to the very end of what they do, and they are much clearer about where their real instincts lie – for violence, for power, for excitement, for whatever it is.”

Instinct is everywhere in the Royal Academy’s compelling and terrifying new exhibition, “Francis Bacon: Man and Beast”. It is a show full of intertwined creatures – some with pelts, some without – and the walls heave with strange, snarling, menacing, biomorphic organisms, all moving by deep impulse.

Bacon was a self-taught painter who always doubted his technical competency. He was also a ruthless editor of his work who would destroy pictures that didn’t meet his standards – a clearout in the early 1980s resulted in five sacks full of cut-up canvases. Nevertheless, there are some poor paintings in the exhibition, but even they are visceral. He wanted every picture to look as though “it’s come directly off the nervous system”, and almost all do.

Although Bacon first exhibited a painting in 1933, he claimed that it was with Three Studies for Figures at the Base of a Crucifixion (1944, a second, more refined version, painted in 1988, is in the exhibition), that “I began”. In each panel of the triptych squats a creature inspired by the Furies in Aeschylus’s Oresteia; the figures were intended to sit beneath the crucified Christ but Bacon never completed the upper part of the painting. So these blind, howling forms, distended and stretched, sit against a vivid red background exuding menace, impotence and pain in equal parts.

Writing in the New Statesman and Nation (as this title was then called), Raymond Mortimer thought the pictures expressed Bacon’s sense “of the atrocious world into which we have survived” and were “symbols of outrage rather than works of art”. Though tempting, reading Bacon’s works as psychological documents is an uncertain business, yet it would seem more than a coincidence that his emergence as a painter thanks to this triptych came immediately after his service as an air raid warden and a Red Cross driver during the Blitz. He had first-hand knowledge of screams and mangled bodies and it fitted his aesthetic. “You have to deform appearance into image,” Bacon claimed.

By aping the predella panels of early Renaissance altarpieces, Three Studies was also an acknowledgement of Bacon’s competitive reaction to the canon of art. It was already there in the earliest picture in the exhibition, the small white-on-black Crucifixion of 1933, one of fewer than a dozen paintings from that decade that he didn’t destroy. The crucified figure is barely human, but rather a splayed object that resembles Rembrandt’s Slaughtered Ox (1655) and Chaïm Soutine’s Beef Carcass (circa 1925) far more than the attenuated Christ figures of tradition.

There is a long history of artists conflating man and meat, but for Bacon it was personal; he once admitted that “if I go into a butcher’s shop, I always think it’s surprising that I wasn’t there instead of the animal”. And perhaps the painter with whom he has most in common is Théodore Géricault, who painted the severed heads and limbs of executed criminals as part of his preparation for his great work of savagery and cannibalism The Raft of the Medusa (1818-19).

It was Velázquez’s portrait of Pope Innocent X (circa 1650) that stirred Bacon the most, and his first “screaming pope”, Head VI (1949), is in the exhibition. Bacon’s most recent biographers, Mark Stevens and Annalyn Swan, see the pope paintings as his reaction to authority: in them, they say, he took on both the pope, representing the authority of religion, and Velázquez, representing the authority of old master painting. It is not a theory that holds up in front of Head VI. There the pontiff sits in a transparent cube-like structure – a trick Bacon probably adopted to help him overcome compositional difficulties – as his head evaporates from the percussive force of the yell hurtling from his mouth. There is no discernible authority here, but rather a man bursting from the unsustainable pressure of being human and being caged by his position. For all his temporal power, Bacon suggests, Pope Innocent had less free will than his flock.

Although Bacon visited Rome, he never went to see Velázquez’s portrait, but relied on illustrations. This too was a way of compensating for his lack of formal training. He bought books of the 19th-century photographer Eadweard Muybridge’s freeze-frame images of men and animals in motion, volumes of photographs of wild animals and, among other things, a book of anatomical illustrations of diseases of the mouth. Even in 1961, when he started painting portraits of his Soho coterie, he made them from photographs he commissioned from his friend John Deakin.

It is Muybridge’s work that reappears again and again, and if Bacon knew the photographer had once murdered his wife’s lover that would simply have added to the appeal. It is Muybridge’s images of dogs that Bacon used as the basis for Dog (1952) showing a panting animal seemingly doomed to move in never-ending circles on untouched canvas, as cars speed along a distant shoreline road with a single palm tree behind. And it was Muybridge’s photographs of wrestlers that Bacon turned into striking images of gruntingly rough gay sex – Two Figures (1953) and Two Figures in the Grass (1954). These are surely not simply expressions of the primal sexual urge but of the torture of being a gay man before the Sexual Offences Act of 1967 legalised his particular desires.

Peter Lacy and George Dyer, two of Bacon’s own lovers, reappear again and again. It was Lacy, a former RAF pilot, who made explicit the debasement involved in their relationship: he beat Bacon, raped him, threw him through a window with a ten-foot drop, and enticed Bacon to his home by telling him: “You could live in a corner of my cottage on straw. You could sleep and shit there.” Like an animal, in other words. Lacy died on the day of the private view for Bacon’s 1962 retrospective at the Tate, the show that cemented the artist’s reputation.

Dyer, an East End tough who fell through Bacon’s skylight while trying to rob him, became the subject of some 20 paintings (Dyer hated them: “I think they’re f***in’ ‘orrible,” he told Peppiatt, “reely f***in’ ‘orful. And he’s getting all that money for ‘em”). Dyer died in 1971 of a drink and drugs overdose on the eve of another major exhibition, at the Grand Palais in Paris, and Bacon subsequently made a series of “Black Triptychs” featuring him. In one, Triptych August 1972, Dyer is shown, face turned inside out as if, in the film director Bernardo Bertolucci’s memorable phrase, he is being “eaten up by something that comes from within”, and stripped to his underpants and dissolving into pink puddles – melting before the painter’s eyes.

It is hard to discern a tangible difference in sentiment between his paintings of lovers and those of animals. After Bacon travelled to what is now Zimbabwe in 1951, where his widowed mother had settled, he recalled that “I felt and memorised the excitement of seeing animals move through the long grass” (he also found the Rhodesian police “too sexy for words – starched shorts and highly polished leggings…”). But then to be alive was a state of predation – either eat or be eaten.

Apes, mouths wide like those of his popes, became a regular motif in the late 1950s as if to emphasise that, in terror or pain, both humans and animals scream (to add another layer of picaresque complexity, Bacon once got drunk with his framer, fell down the stairs and, unconscious, was put to bed under Edvard Munch’s The Scream, which was being reframed at the time). And in 1969 he painted a series of bullfight paintings, matador and animal swirling as a single entity with a snapshot of a Nazi Nuremburg rally at the back of the ring. “Bullfighting is like boxing – a marvellous aperitif to sex,” Bacon said, and three of the paintings have thick dollops of white paint that could be ectoplasm, or semen.

Bacon’s conviction that there was no distinction between man and beast makes this a visceral if bleak and disturbing show. All his Dr Moreau’s creatures are visualisations of a belief that, as we labour under the human condition, there is no such thing as animal urges, just urges.

Newsletters from the New Statesman View all newsletters
Subscribe for the best of our politics, international affairs, culture and business coverage, straight to your inbox
THANK YOU
Topics in this article: Francis Bacon

This article appears in the 02 Feb 2022 issue of the New Statesman, Going Under