In the 17th century some ideas about the insect world that now seem odd were distinctly plausible. According to the law of “spontaneous generation”, the creatures were “mud-born” or grew from dew, while maggots were engendered by rotten meat and moths by wool. It is no surprise, then, that Johanna Heyne thought the cause of her daughter’s unnatural and distressing interest in insects was implanted in utero when Johanna had foolishly looked at a bug collection while pregnant.

Her daughter, Maria Sibylla Merian (1647-1717), grew up to be a pioneering entomologist and a botanical artist of great distinction. In a series of illustrated books she not only expanded existing knowledge about numerous species and genera of insects but also formed the basis for what today we understand as ecology. Merian, through years of close observation, saw that certain insects would feed only on particular plants and so laid their eggs on them accordingly. She realised that the environment influenced the insects’ development and that interconnectedness was vital to their health.

It was this understanding that made her wonderfully detailed illustrations so radical; rather than show the adult insect as a specimen all-but pinned on a plain background, as was the norm, she depicted them in the same image at every stage of their formation – from egg to larva to pupa (“date pits”, as she called a chrysalis) to adulthood – together with the specific plants they needed to feed on. Here were not just the insects but their whole ecosystem too. Classification for its own sake had no charm for her; as she told one English naturalist, she was interested “only in the formation, propagation, and metamorphosis of creatures… the nature of their diet”.

Merian was precocious in both her entomology and her art. She was born in Frankfurt, where her father was a publisher and engraver. After he died when she was just three, she received early encouragement and instruction from her new stepfather, Jacob Marrel, who painted still lifes and flowers. His natural history reference books were supplemented by her own bug hunting forays: she recalled that, at around age 13, “I spent my time investigating insects… I realised that other caterpillars produced beautiful butterflies or moths, and that silkworms did the same. This led me to collect all the caterpillars I could find in order to see how they changed.” 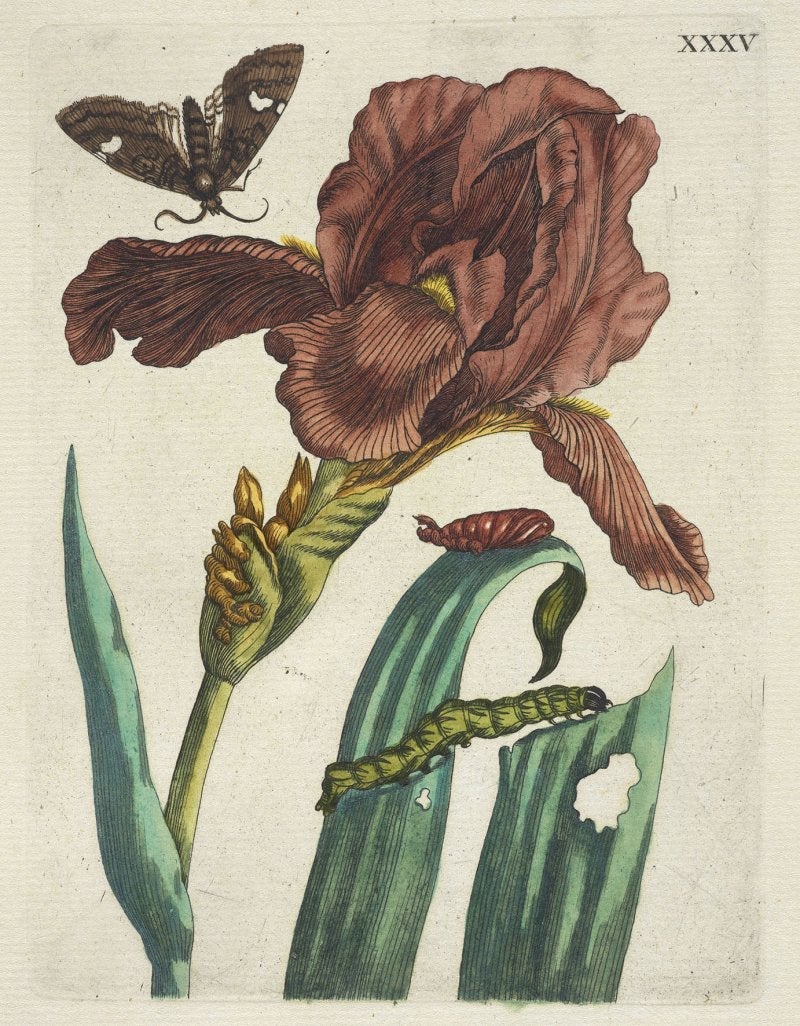 The practical habit never left her. When she married one of her stepfather’s assistants, Johann Graff, had two daughters and taught drawing to unmarried girls from wealthy backgrounds to boost the family income, she maintained her interest in insects, and in 1679 published the first volume of a work on metamorphosis.

The marriage ran into trouble and Merian spent three years with her mother and daughters at a Protestant religious community in Friesland, where gender equality, craft skills and the sharing of wealth were among the defining rules. It was there that she both learned Latin and met a former governor of Surinam, the Dutch sugar colony in South America. The ideas imprinted then, and the specimens she saw in Amsterdam collections (“their origin and their reproduction is unknown”) led, in 1699, to Merian, aged 52, visiting the colony herself, in the company of her second daughter, Dorothea Maria.

Not only were they unaccompanied women but unusually the trip was specifically for scientific rather than mercantile reasons, and it was also unsponsored – Merian had sold most of her paintings to raise the finance. Mother and daughter spent two years in Surinam, as figures of amusement to the Dutch who “mocked me for seeking anything other than sugar in the country”, but indefatigable in their travelling, insect collecting and sketching. In their hunt for specimens they climbed trees, explored rivers and paid the indigenous people to bring them samples.

Merian’s single-mindedness did not, however, blind her to the position of the slaves who worked the sugar plantations; she wrote of the peacock flower that “the Indians, who are not treated well by their Dutch masters, use the seeds to abort their children, so that they will not become slaves like themselves. The black slaves from Guinea and Angola have demanded to be well-treated, threatening to refuse to have children. In fact, they sometimes take their own lives because they are treated so badly, and because they believe they will be born again, free and living in their own land. They told me this themselves.”

For all their brilliance and delight (the flavour of the pineapple, she said, was “as though one has mixed grapes, apricots, red currants, apples and pears and were able to taste them all at once”) the flora and fauna were battling too. In 1701 Merian returned to Holland, probably as a result of contracting malaria. “It is very hot in that country, so that one can only work with the greatest difficulty,” she wrote. “All the people there were amazed that I came out of it alive, for most people there die of the heat.” 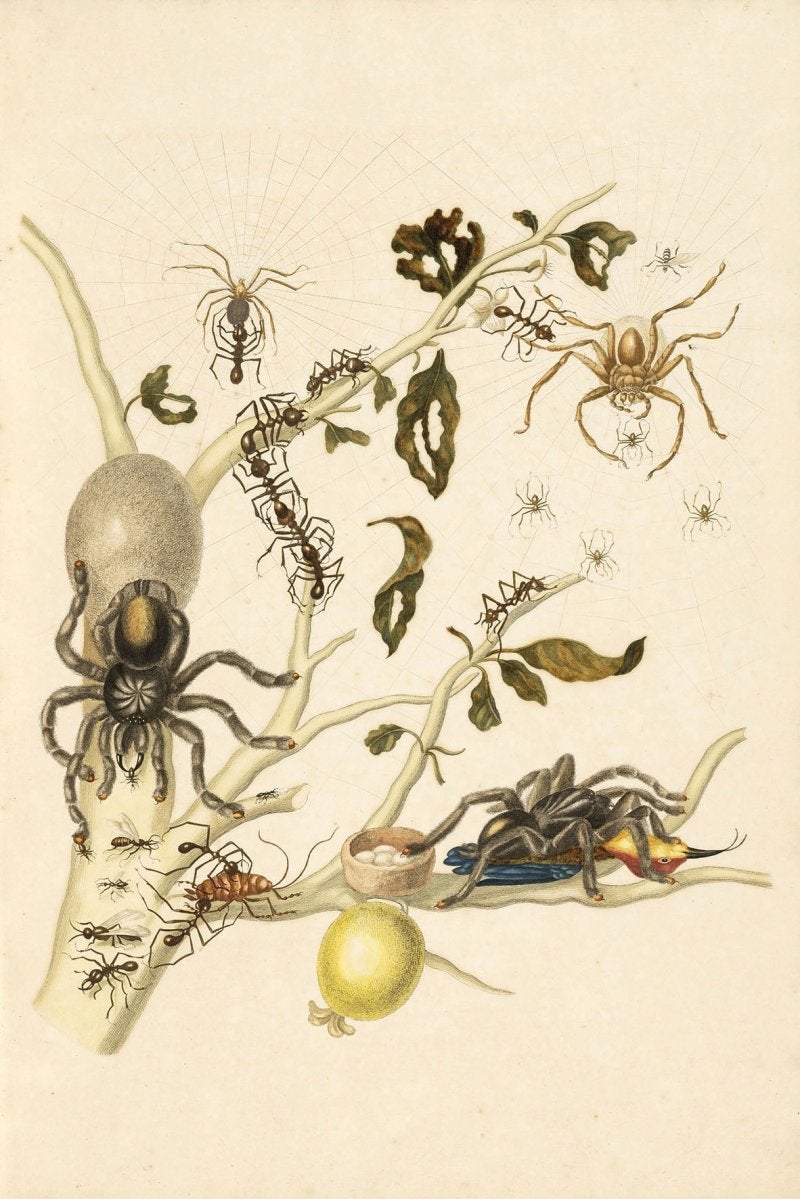 In 1705 she published the results of the trip as Metamorphosis Insectorum Surinamensium, a luxury volume in which her drawings of a caiman eating a snake, a spider devouring a hummingbird, soldier and leaf-cutter ants, and innumerable other instances of the struggle for survival had been engraved into vivid tableaux. These revelatory scenes of unfamiliar plants and animals showed that the cycle of life, even in so exotic a realm, was an ungentle passage.

At her death in 1717, from the effects of a stroke, she was not as celebrated a naturalist as her male peers. Nevertheless, Peter the Great thought highly enough of her to buy 300 of her paintings and Carl Linnaeus later used her pictures to identify innumerable new species. Perhaps the accolade that would have delighted her most, though, is that, among other flora and fauna, at least three butterflies, two spiders, a lizard and a toad have been named after her.