Just when it was in danger of becoming bland and commodified, street art has recently rediscovered some of its original urgency – first during Brexit, and now during the coronavirus pandemic. In place of the monochrome animals, retro lettering and instagrammable portraits of David Bowie, you’ll find nakedly political messages on the walls of buildings across the UK.

Alongside offerings from well-known artists such as Stik, Jonesy, Jimmy C and Zabou, you’ll see murals of NHS nurses in PPE, Black Lives Matter imagery and grotesque caricatures of Johnson, May and Trump; and scrawlings of “bugger Brexit”, “feed the rich, vote Tory” “sanitiser won’t save you”, “Covid isn’t real”. During early lockdown, there were also the more uplifting: a couple lowering their masks to kiss, a little boy watering an NHS rainbow, phrases including “please believe these days will pass”, “stay positive”, “care for others”.

Street art has always been accessible – free to view, uncomplicated in message, appealingly colourful, and removed from the exclusive gallery ecosystem. During lockdown when museums and galleries were first closed, then appointment-only with restrictions in place, it took on a renewed significance. The first London Mural Festival was held last month – it had been planned long before the current crisis but it could not have been more timely, with huge annual art fairs such as Frieze cancelled this year. Over 150 artists from around the world such as Camille Walala, Trafik and Dale Grimshaw transformed walls, buildings, shopfronts and even houseboats around the capital.

[See also: How the subversive dancer Michael Clark upended – then took over – the arts establishment]

You can’t discuss street art without mentioning Banksy and, right on cue, a new work by the anonymous artist of a girl hula-hooping with a bike tyre appeared on a wall in Nottingham last week. On the pavement in front, a real battered bike missing a wheel is chained to a street sign. According to a recent story in the Evening Standard, the Banksy market has been booming during lockdown with many of his original low-cost prints and limited editions fetching hundreds of thousands of pounds at auction. Not to mention the works themselves chiselled off walls and transported to sale rooms – his dystopian, chimp-filled House of Commons fetched £9.9 million at Sotheby’s last year. This summer, Banksy used some of the proceeds from the sale of his works to pay for a 30-metre vessel to help rescue migrants in the Mediterranean.

Before Banksy there was the 1980s New York graffiti and street art scene, which created crossover stars like Keith Haring (whose retrospective at Tate Liverpool I reviewed last year) and Jean-Michel Basquiat. Now, Richard Hambleton, the third member of that scene, is experiencing a revival and his dark, sinister imagery could not be more timely. The Canadian artist moved to New York in the late 1970s and first gained notoriety with his “Mass Murder” series – chalk outlines of “homicide victims” splashed with red paint around 15 American and Canadian cities with low crime. They were startling and shocking to passers-by and a comment on the rising murder rates in America’s less fortunate inner cities. This week some of the best-known works by Hambleton, who died in 2017, are on show through the London gallery Woodbury House as part of the Start art fair at the Saatchi Gallery.

On show are 22 of Hambleton’s “Nightlife” series: his signature, haunting Shadowmen. These were fuzzy, life-size sillhouetted figures he painted on street corners and dark alleyways of bankrupt and shabby early-Eighties New York. Appearing on hundreds of buildings across the city, they were positioned for maximum surprise impact on pedestrians as they loomed and lurched out suddenly and sinisterly. The Shadowmen went on to appear in London, Paris and Rome and, in 1984, he painted 17 of them on to the East side of the Berlin Wall, five years before its fall.

[See also: The brilliance and brutality of Lucian Freud] 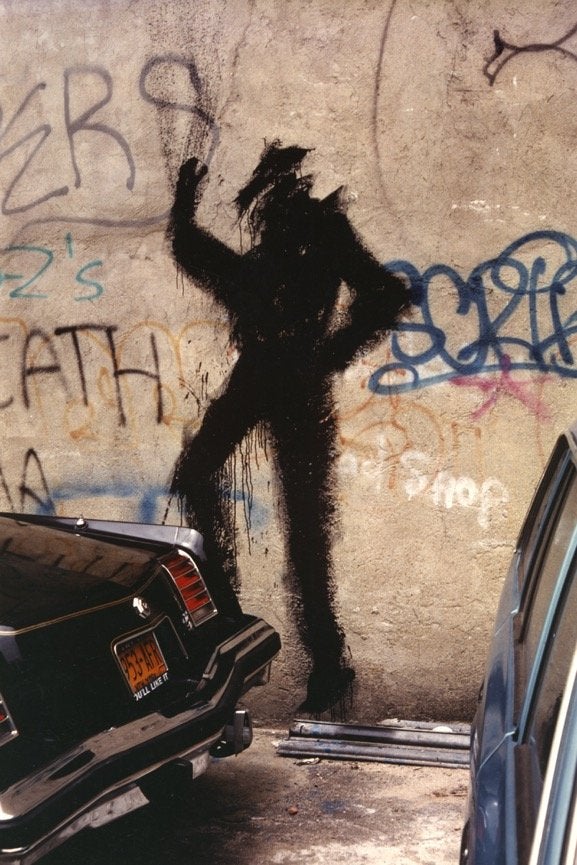 Despite their slasher-horror connotations, there was also a delicate painterly quality to the murals. Hambleton went on to create a series of the Shadowmen on canvas, and on concertinaed Japanese paper, as seen above. The works are accompanied by street photography by Hambleton’s friend Franc Palaia, who accompanied the artist on his guerrilla expeditions. It’s a glimpse into a grimier, ungentrified New York that was experiencing an explosion of creativity in art, nightlife, music, fashion – all bubbling up from the streets.

Start is at Saatchi Gallery, London SW3 from 21-25 October, startnet.com. A limited edition print and the book  “Nightlife: The Shadow Paintings of Richard Hambleton, 1981-87″ are available from woodburyhouseart.com