As the 19th century turned into the 20th, the burghers of Ostend on the Belgian coast slept at night safe in the knowledge that their town, with its prairie-like beaches and heroic architecture, its hippodrome and its casino, its bathing huts and hotels, was one of Europe’s most fashionable and thriving fleshpots. In the small hours, however, had they listened carefully, they would have heard the door of the perfumery at Kapellestraat 2 open and then close as an attenuated figure with a baroque coif of hair stepped into the darkness. The insomniac, troubled by stomach ulcers, would walk up and down the deserted promenade, along the empty arcades, on to the seafront buttresses, and absorb a monochrome and simplified world of silence, silhouettes and the occasional corona of gaslight.

When, after hours of wandering, Léon Spilliaert returned home, he would take up a board, pin a sheet of paper to it, rest it against the back of a chair and begin to draw impressions of the sensations and images provoked by his nocturnal roamings. “I am living in a real phantasmagoria,” he wrote, “all around me dreams and mirages.” Not that he saw his pictures as untethered to real life: painting, he thought, was “cerebral work, therefore realistic”. The works he produced, however, are ghostly, dreamlike, unsettling, intense and profoundly strange. They are also almost unknown to a British audience, something the exhibition of 80 examples of Spilliaert’s work – mostly from private collections – at the Royal Academy in London hopes to put right. 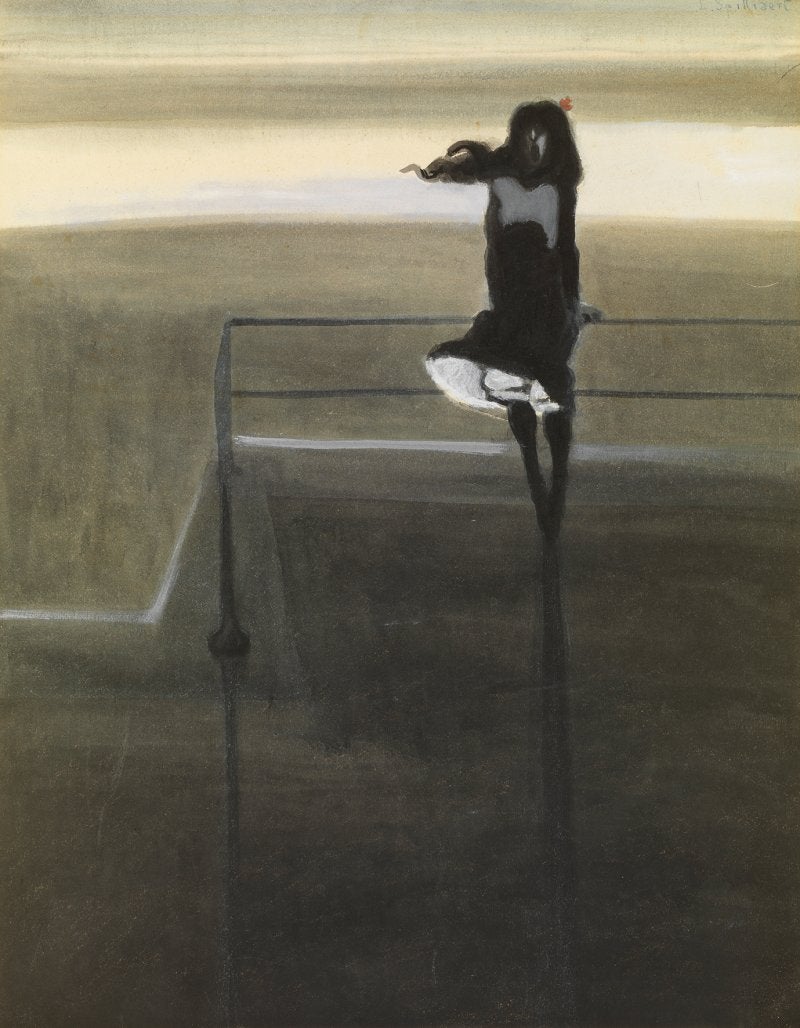 One reason Spilliaert (1881-1946) is such an unfamiliar name is that he was a largely self-taught artist whose output consists almost entirely of works on paper: only 61 of some 4,500 pictures are in oils, which has led him to be dismissed as a minor practitioner. His drawings, though, incorporated a variety of techniques on the same sheet – pastel, inks, watercolours and pencil – giving what are predominantly studies in blacks and greys both depth and subtlety.

If the pictures pare down detail to broad horizons and perspectives that angle sharply to the vanishing point, they turn up the atmosphere. They express his feeling that, “My head seems to be filled as if with mists”, a sense exacerbated by his reading of Nietzsche, Schopenhauer and Edgar Allan Poe. His are images of melancholy, solitude and soul-searching that recall both the pain of Edvard Munch (whose prints he knew) and the otherworldliness of Odilon Redon.

Spilliaert was an artist ill at ease with himself: he had a bad temper and thought he had a bad character, too. Although in 1902 he started to produce illustrations for the Brussels publisher Edmond Deman’s books of symbolist poetry, he felt that recognition was too slow in coming, writing in 1904: “I’m tired of waiting for luck to come my way, in the end that leads to abjection.” His self-loathing spread to his work: “Symbolism, mysticism, it’s all madness, sickness, I’d like to tear up everything I’ve done so far, destroy it all.”

He never did, though, and almost in spite of himself built a reputation among collectors. The novelist Stefan Zweig bought two works from Spilliaert, and he exhibited with  Picasso in Paris in 1904 when the two men wagered a dinner on who would be the first to sell a picture (Spilliaert won but Picasso never paid up). A happy marriage at 35 after the First World War and the birth of a daughter necessarily softened the alienation that gives his best work its sinister potency.

Among the most startling pictures he made are his 38 self-portraits, the majority painted in a single intense period in  1907-08, in which Spilliaert shows himself as a cadaver as much as a living being. Sunken-eyed and hollow-cheeked in mirror-hung interiors, he looks out as if in horror at the sight of himself, or with a penknife open menacingly next to him (when really it is just to keep his pencil sharp), or as a silhouette – a non-person, a void – backlit against net curtains.

Spilliaert didn’t explain his pictures, so there is no one meaning to a work such as Contemplation (circa 1900), showing a row of tree trunks which, pollarded, look like standing bones, or to the remarkable The Gust of Wind (1904). In it, a young girl stands against Ostend’s promenade railings as a sharp puff lifts her skirt, Marilyn Monroe-like, and reveals a flash of white bloomers. It is almost a comic picture until you look at her head, a red flower in her hair the only speck of colour, and see that she is screaming. Why? It is not for the immodesty. What has she seen or felt, what is menacing her? The viewer is left to hypothesise but, as in Munch’s celebrated version, the frisson of terror is palpable.

Spilliaert was, however, much more than a mere Belgian Munch; he was a unique and remarkable artist. Nevertheless, for all the welcome if overdue exposure, he remains the enigma of Ostend.

“Léon Spilliaert” runs until 25 May

This article appears in the 26 Feb 2020 issue of the New Statesman, The death of privacy