In a 2017 Netflix earnings call, broadcast to investors via YouTube, CEO Reed Hastings was asked about the looming threat of Amazon, which was then shovelling billions per year into its streaming services. But Hastings didn’t see any challenge from his purported rivals. Amazon is doing well, and we want them to do well. He then made a revealing pivot. “Think about it, when you watch a show from Netflix and you get addicted to it, you stay up late at night… We’re competing with sleep… it’s a very large pool of time.” Later that day, the company’s social-media team picked up this thread, and posted a tweet which went viral: “Sleep is my greatest enemy.”

Alexander the Great wept because there were no more worlds to conquer – consumer capitalism has no such problem, for a third of our lives has traditionally been spent in a state of defiant, oblivious resistance to its lures. As new or emerging markets go, this one is huge – and corporations and employers are engaged in a frantic gold-rush into this virgin terrain. Most estimates now place an average night’s sleep for an adult in the West at six and a half hours or fewer. Only a generation ago, it was eight hours, and in the early 20th century, ten. It is hard to overstate how momentous these changes are to the everyday life of the human animal, after millennia of stability.

As globalised capitalism and technology move us ever closer to a 24/7-365 existence, and away from our circadian rhythms, most of the world’s working adults have lost their connection to both the steady daily routines of agrarian, pre-electric society, and increasingly the regulated “Fordist” industrial capitalism of the 9-5 production line (“Fordist”, after the Ford Motor  Company). In a smartphone-enabled, gig economy world, what happens to human beings who never clock off? We now live, to use an aptly queasy term coined by the academic Alex Williams, in an age of  “post-Fordist plasticity”.

For one thing, these changes are having deleterious consequences for our mental and physical health – not just insomnia but depression, anxiety, heart disease and cancer are all rising, in part because of sleep deprivation. We know we have a problem – we talk about sleep and stress constantly; but we tend towards short-term palliatives, sleep-tracking apps, meditation and tablets. American art critic Jonathan Crary’s cult 2013 book 24/7: Late Capitalism and the Ends of Sleep zooms out to give the crisis the perspective it deserves, describing sleep as a last-chance saloon “that cannot be colonised and harnessed to a massive engine of profitability, and thus remains an incongruous anomaly”. But, he warns, we are rapidly losing the battle to protect it. Crary’s book is a hugely significant polemic about technology, work, urbanisation, time, light and dark, dreams, and the world we now live in. Barely 140 pages in length, it is as dense as tungsten – the kind of book you need to pull away from your face every few pages to think about, and exhale, before resuming.

The winter exhibition of Somerset House in London is also called “24/7” and it is directly inspired by Crary’s book. Featuring more than 50 pieces, many of them new commissions, it is arranged in five parts, beginning with “The Wreckage of the Day” – Crary’s phrase for late capitalism’s erasure of the once-clear borders between day and night, and the disruption of the agricultural rhythms that human society worked to for the previous 20,000 years. It then moves through themes of “Sleep/Attentiveness”, “Surveillance/Control/Acceleration”, and “Work/The Commons” – before attempting to find some kind of resistance in the final zone, “Reset”.

That a gallery in London should pick up Crary’s ideas seems appropriate, and timely. New York might be the city that never sleeps, but London is the global capital of the time-zone-straddling foreign exchange market, and since 2016 has acquired a night Tube, a £75,000-a-year “Night Czar”, a determined commitment from its mayor to champion “the night-time economy”, and an apt new piece of city-branding as its motto: “London is open.”

In Somerset House, the sheer diversity of works and objects on display is dazzling. Alongside newly commissioned installation pieces and some well-chosen loans are unexpected archive finds, such as a  majestic 1905 time-recording device belonging to the Central Telegraph Office – a kind of steampunk testament to precision timekeeping, as it was becoming central to the ideology of an ever more money- conscious, interconnected world.

“An exhibition begins to form in the mind” as you read 24/7, write Somerset House director Jonathan Reekie and curator Sarah Cook in the exhibition catalogue – and you can see their point. The most direct line between the two is the exhibition’s opening painting, which has a key role in Crary’s book: Joseph Wright of Derby’s Arkwright’s Cotton Mills by Night. Dated to the 1780s, it shows Arkwright’s newly  illuminated mill glowing in the dark, unruly countryside, a beacon of new, round-the-clock productivity – the arrival of industrial modernity disrupting the rhythms of the rural day, mocking the moonlight above. It is displayed next to Rut Blees Luxemburg’s 1995 tower-block photograph, A Modern Project (Highrise), an emblem of the modern city – artificially glowing beneath pale yellow skies – familiar to many from its  appearance on the cover of the Streets’s first album, Original Pirate Material.

The relationship between work and sleep is central to Crary’s narrative, and perhaps the most direct illustration of this in the exhibition is Alan Warburton’s contribution, Sprites I-IV: sickly green digital prints of his former colleagues in a Chinese render farm – where they make computer graphics for Hollywood films – hugging pillows tight to their faces as they sleep at, on top of and under their desks. It is surprisingly emotionally affecting. There is something deeply sad about sleep missed through economic necessity (rather than choice), analogous with the pathos of night-shift workers asleep on an early morning bus. 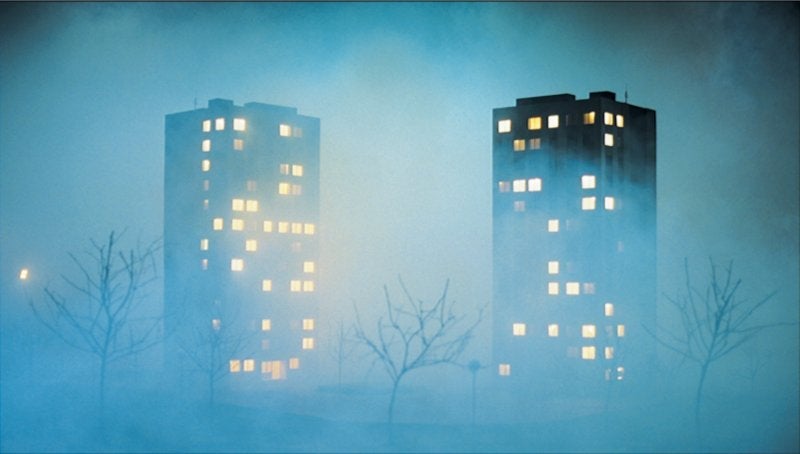 It is the same culture that gives us superstar CEOs bragging about starting work at 4.30am, implying that their hand-to-mouth shift-working employees could be billionaires too, if they worked a little harder. It is also of a piece with what the cultural critic Mark Fisher called “mandatory entrepreneurialism” – where success is just a chest-beating LinkedIn post or a motivational hashtag away. Our hours have become more irregular, and work never stops – thanks to being on-call on evenings and weekends via our smartphones, self-branding on social media, the huge rise of zero-hours contracts and workers classified as “self-employed” (3.3 million more Brits between 2001 and 2017), and globalisation. Culture, transport and the service economy are following suit – the lights never go off in the world’s major cities – no wonder we’re all so tired.

Pilvi Takala’s filmed performance piece The Stroker sees her embed herself in the trendy east London co-working space  Second Home, as a “wellness consultant”, wandering the halls, smiling at and gently touching the employees. It offers a funny  comment on how emotional well-being is  increasingly connected to productivity by an economic system only interested in the latter – like companies offering free mindfulness courses to overworked employees.

Jonathan Crary was only tenuously involved in the exhibition, but has given it his blessing – and, over the phone from New York, where he is Meyer Schapiro professor of modern art and theory at Columbia University, he asks with interest about how it is looking. His books, he says, are always more popular outside the art world than within it – and he is in the midst of writing a sequel about the climate crisis, drawing on the same themes of insatiable capitalism. “What separates us now from 2013 is the increased awareness of ecological collapse – a very different set of historical circumstances.”

Crary emits a wry laugh. “I mean, in a sense, whether we get enough sleep now seems like the least of our worries.” But the two crises stem from the same root cause: “What I have to say about sleep is applicable to a much larger set of  issues. And environmental or ecological collapse is inseparable from the damage that’s being done to human beings.”

He argues that “the imperatives of a global free-market economy are pushing past certain kinds of physical limits” – whether that’s the physical limits of the human body, or the planet’s natural ecosystems and resources. And for many of those limits, once they are crossed, return is impossible. I’ve often had to remind myself that it’s not biologically possible to “catch up on sleep”, after too many late nights. Similarly, turning two-degree planetary warming back down and lowering global sea levels aren’t really options the UN climate change panel is considering.

The world has changed a great deal in the short time since Crary’s 24/7 was published; so have the purported treatments for the problems it describes. The explosion of guided meditation videos on YouTube, as well as mindfulness and sleep-tracking apps, lamps that simulate sunrise, and endless online content about “how to break your screen addiction” are a measure of how deep the crisis has become, and how fast it’s happened. But it’s significant that we’ve primarily responded by trying to build these small palliatives into the disease’s delivery system. A 2015 Boston Globe headline about one such piece of software gave a nod to the irony: “Need to unplug? There’s an app for that…”

At worst, the way we talk about these issues risks personalising or pathologising a political-economic problem. “You’re stressed – and no wonder, you’re a smartphone addict!” is a very different message to, “You’re stressed – and no wonder, the relentless assault of round-the-clock wage labour and cynical technological innovations are cannabilising your body’s need to restore itself before the next day!”

Ignoring the wider context of the monetisation of our time in favour of a narrow focus on smartphone addiction is a common mistake. One of Douglas Coupland’s works in the exhibition is a photo of someone on a beach at dusk holding aloft a glowing smartphone, which bears the words “I MISS MY PRE-INTERNET BRAIN”. It feels like a textbook glib Gen-X critique depiction. This is a much longer, grander and more pernicious story of the insatiability of capitalism, rather than of (young, superficial) people spending too much time on Instagram.

Both the Somerset House exhibition and Crary’s book encourage us to step back from the visual static and join the dots between the problems we see. When we do that, we see that light pollution in our cities, wearable technology that monetises our health data, the rise of the gig economy, and recent mass power outages in California are all connected. If only we could get a good night’s sleep, maybe tomorrow we could work out what to do about it all.