Long after they shut, certain nightclubs live on as legend because they captured a moment. More than the sum of their parts, they are both ephemeral, hedonistic playgrounds and the scene of something greater – a cultural movement that exploded far and wide. In recent history, Studio 54, the Blitz Club, the Hacienda, the raves of the early Nineties, and the Club Kids of New York all made a mark on society, while nurturing groups of artists, performers and outsiders.

With cities now haemorrhaging clubs – especially on the gay scene – the Barbican’s “Into the Night” explores what we lose when they close down. Though it focuses specifically on historical clubs that embodied visual art movements, the show illustrates the continuing correlation between creativity, freedom of expression and liberated sexuality – and the need for safe, secretive or subversive spaces in which to enact them.

The show spans the modernist period from the 1880s to the 1960s and ranges widely across cities and movements, from Paris to Mexico City, Vienna to Tehran. Each city has a separate room, filled with artworks, design, literature and memorabilia, brought vividly to life with bold paint combinations – olive and oxblood; turquoise and lemon; ochre and calamine. In the lower galleries, some of the venues have been faithfully recreated. 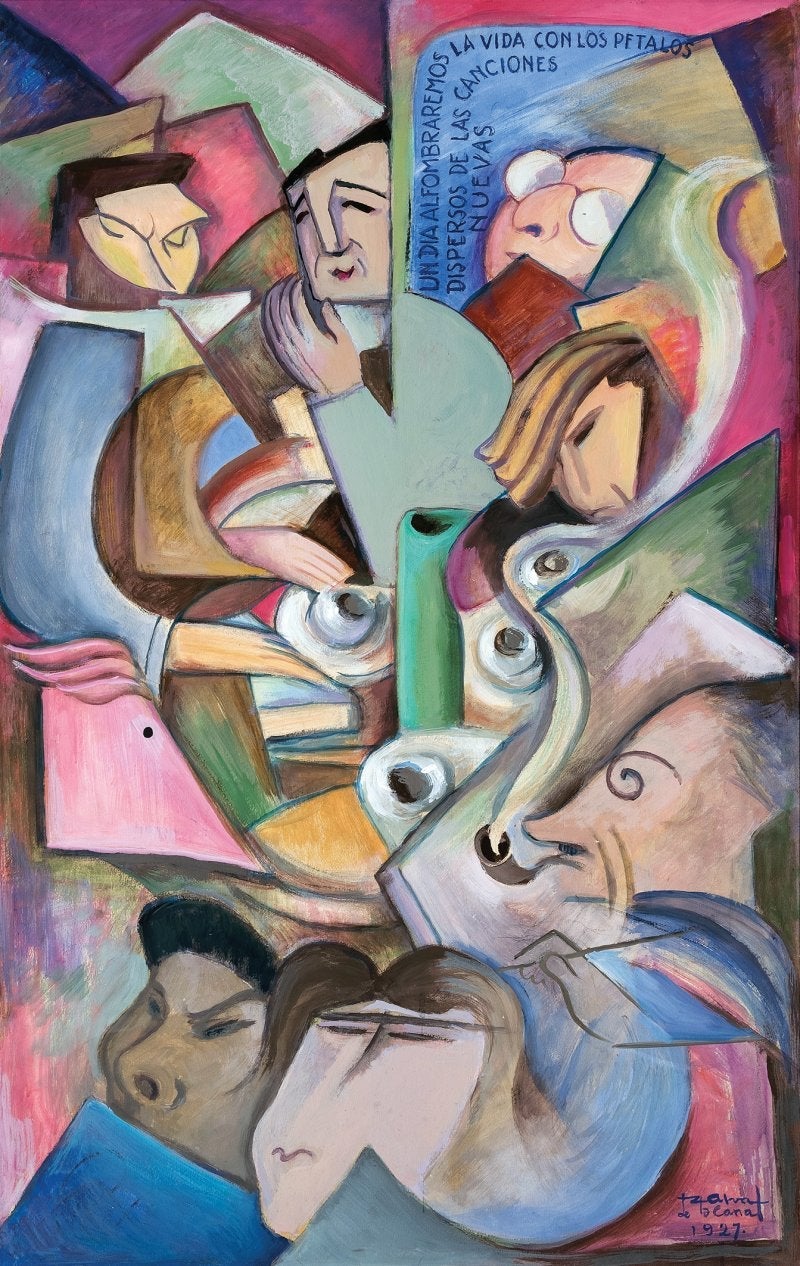 There’s the Chat Noir of fin de siècle Paris, salon of radical writers and artists, with its black cat motif, paintings by Toulouse-Lautrec and proto-cinematic shadow puppets. In Zurich in 1916 we find the anarchic Cabaret Voltaire, birthplace of the dada movement. Vienna’s Cabaret Fledermaus (1907-13) was a vibrant expression of the Wiener Werkstätte’s gesamtkunstwerk (“total work of art”) ideals – a place where no art form was excluded and feminist performance flourished. A London room features the 1912-14 Cave of the Golden Calf off Regent Street, hang-out of the vorticist set.

A fascinating trip to Mexico City in the 1920s shows the Café de Nadie, centre of the revolutionary estridentismo (or stridentist) movement, whose output ranges from Picasso-esque masks to wonderful woodcuts. Leaping forwards to the 1960s, we are placed in the Mbari clubs of Ibadan and Osogbo, where Nigerian modernism blended Western avant-garde with indigenous song and dance as the nation emerged from colonial rule. It feels surprising, fresh and urgent.

There is so much to see, but certain early 20th century rooms stand out. Two clubs in Rome in the 1920s, the Bal Tic Tac and Cabaret del Diavolo, fizz with the kinetic energy of the futurist movement. Here, Giacomo Balla and Fortunato Depero sought to transform their environment through the brave new world of abstraction. By Balla we see sketches of dancers, set designs like the bright, jagged Feu d’Artifice (1916-17) and swirling decorations for the Tic Tac’s interior. Themed on Dante’s Divine Comedy, Depero’s Diavolo is a devilishly playful den of iniquity, with everything from tapestries to furniture pronged with flames, tridents and horns: tutti all’inferno! 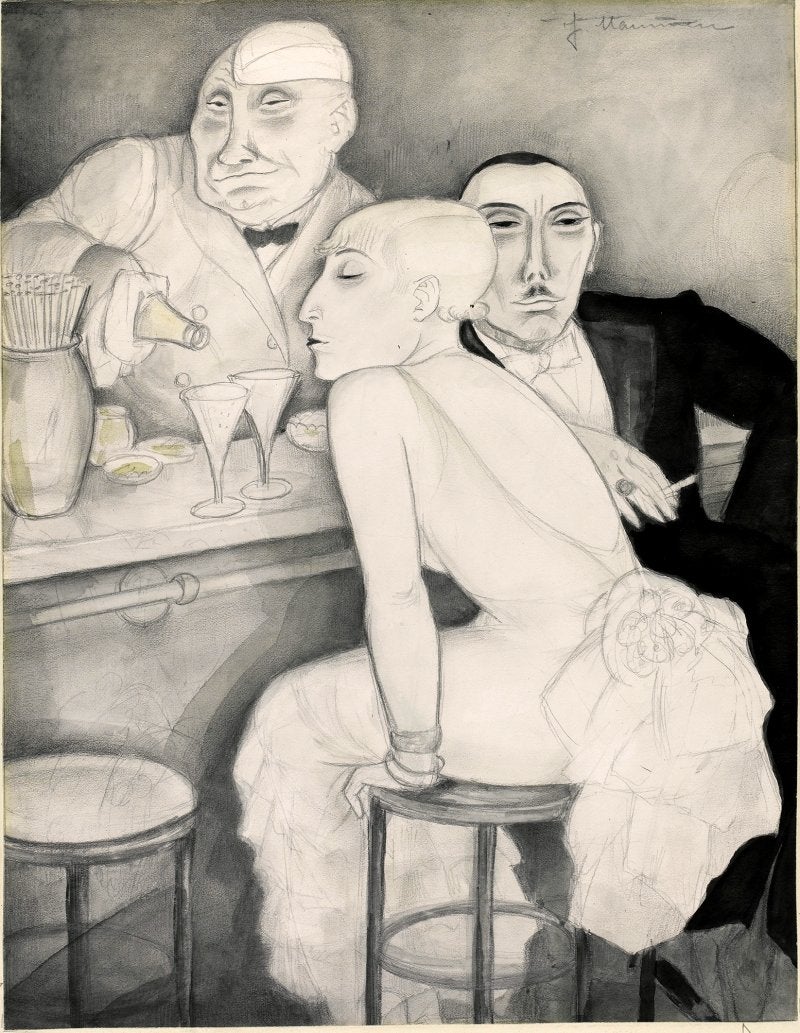 The room on 1920s-30s Weimar nightlife is busiest: it’s not hard to see why. With a focus on women artists, it sets the shock of the Berlin club scene against the traumatic aftermath of war. Rudolf Schlichter’s wry Damenkneipe (circa 1925) gives a glimpse into a lesbian club, with smoking drag kings. Jeanne Mammen chronicles the queer aesthetic of the scene – from chi-chi cocktail bar to riotous gay dive – with smoky, satirical watercolours, while Erna Schmidt-Caroll’s joyous pastels convey the heady glamour of carnival, and Karl Hofer’s nude Tiller Girls (1927) are pure Sally Bowles.

Prompted by African-American migration to New York, the Harlem of the 1920s-40s had nightlife to rival that of Paris or Berlin, and the show brilliantly captures this intoxicating flowering of jazz clubs through the artwork they inspired. Aaron Douglas’s Dance (1930), with its silhouetted performers and saxophonist, leaps from the frame, while his striking monochrome prints to accompany Langston Hughes poems show the symbiosis between music and art. William Johnson’s series of Jitterbugs (1941) conjures the energetic contortions of the brand new dances with blocks of acid colour.

The common thread running throughout this show is dance. There are videos and photos of these performers on show, and if anything I would have liked to see more of them – and of their audiences – to help bring the spaces to life. Radical new forms of expressionist dance – from Diaghilev ballet to Loïe Fuller’s serpentine swirling, from the cakewalk to erotic cabaret – were causing a sensation across the world. And it’s women who are often the subjects, not so much objectified as liberated. Pioneering performers such as Grete Wiesenthal, Josephine Baker and Anita Berber were breaking free of the norms of gender, sexuality, clothing and class. There is no greater embodiment of the avant-garde than these fearless dance warriors.

The exhibition runs until 19 January 2020