“The severity of the long Swedish winter,” Mary Wollstonecraft wrote after a brief stay in 1795, “tends to render the people sluggish.” After two years of living in Sweden, I can attest to that. During my time here, I’ve come to believe that the biggest celebration in the calendar year should not be Christmas or Midsommar, but the beginning of daylight saving time in the spring – the formal end to the dark, listless winter of seven hour days and seventeen hour nights. At first, it can be hard to adjust to the harsh change in the quality of light that occurs at the end of March – from drab and dim to stark and bright. But when you win back morsels of sunlight day by day, your senses are slowly shocked into misremembrance. “Winter can’t have been that bad, can it?” you think to yourself. That is how nature triumphs in Sweden: disorientating you, tricking you into staying.

In the summer months, I walk home through the streets of Stockholm drunk in trainers at 3am, and stand quietly in the middle of the road, waiting for the streetlamps to switch off. For women who walk at night with rudimentary weapons held between fingers – keys, bottle openers, a lit cigarette – these domed, hanging lamps make the dark feel a little more bearable. But at this time of year, the sun rises early enough to light the way home itself, and for several months, the near-perpetual glare makes things feel exceptionally clear. Which means if you want to see the bad in Sweden, you don’t have to look too far.

This is the backdrop for the film Midsommar. Written and directed by Ari Aster and released in the UK earlier this month, it gives traditional Swedish summer solstice celebrations a horror twist. The sinister rites and rituals of the fictional, white linen-clad Hårga community don’t hide under the cover of darkness. They are as clear as the constant day – if visiting American students Dani (Florence Pugh), her boyfriend Christian and their friends Josh and Mark are willing to see them. The grisly plot plays out in the rural region of Hälsingland, during a nine-day festival that occurs every 90 years (Aster’s invention), starting with a celebration of Midsommar Day.

Dani, Christian and their friends are at once delighted and disturbed by their new Edenic surroundings. The endless daylight and the Hårga’s insistence on giving florid, druggy cocktails to new guests add an extra level of hysteria to proceedings. “That can’t be right, the sky is blue!” Mark shouts when he is told that it’s 9pm. (“The early dinners in Sweden had entirely deranged my day,” Wollstonecraft wrote.) The film’s brutal exaggeration of the Midsommar tradition plays with the disharmonies at the heart of contemporary Swedish society, questioning gender relations and unpicking the myth of the Scandinavian Utopia. 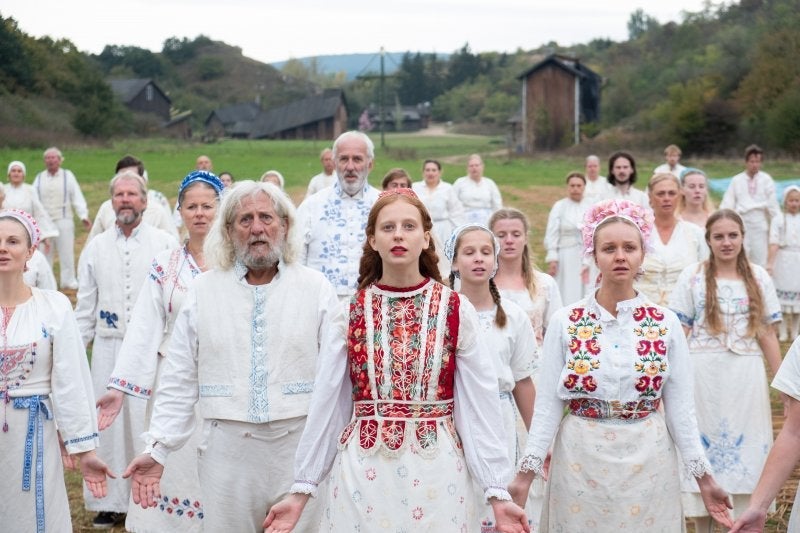 This year I went to a Swedish Midsommar gathering in a southern corner of the country, at a large house tucked between forest and the Baltic Sea. I experienced the festivities in the “proper” Swedish way: in the countryside, with a big group of Swedish friends, friends of friends, and strangers. We arrived in cars clattering with booze, the rest of the party already picking flowers to dress the maypole with. We grabbed some cans and followed them quickly into the undergrowth, dispersing into the long grass. People generously checked my body for ticks (as the film jokingly acknowledges, they pose a genuine health risk in rural Sweden). I found it touching that my new friends were already looking between the folds of my knees.

The next 12 hours are as picture-perfect as you can imagine. We sit together under a strong sun, crafting flowers into crowns, spontaneously singing Swedish folk songs (unfathomably, everyone knows all the words) and eating a Midsommar dinner of herring, meatballs and Västerbotten cheese pie at a long stretch of table in an Instagrammable barn. There is schnapps, and beer, and wine, and further wine. With no mobile data in the countryside there’s no need for phones, and the sun becomes our unreliable timekeeper. Later, we sit around the campfire during the brief darkness, I am drained from the dancing, a grass allergy, the unquantifiable hours of drinking shots and the mental energy spent trying to translate key words from jokes I don’t understand. The friend I arrived with puts me gently to bed. I zip myself up like a slug in my sleeping bag, and as I fall asleep, I hear my friend’s laughter outside.

A more banal horror than Midsommar’s slick, aesthetic nightmare awaited me. “Is it tomorrow?” Dani asks in the film, when she awakens, confused, to find the sun has fallen and already risen again. Wordlessly, I wonder something similar when I am stirred from drunken unconsciousness. I feel the weight of a man’s body next to me, a man who is strange enough to me that I don’t recognise his face at all. He says he has been trying to find me; that he is so glad I am here. I feel him force a kiss on me. I feel him moving my hand, heavy with sleep, between his legs. Groggy and frightened, I try to think of what I can say to make him leave that won’t anger him. I garble, “I am asleep, I have been asleep, I was asleep.” After what feels like a very long time, he leaves. A few weeks later, when discussing The Fucked Up Thing That Happened To Me with a friend in Stockholm, she says her initial feeling was horror. Her next thought was, “So, Emma really did experience a traditional Swedish Midsommar.” 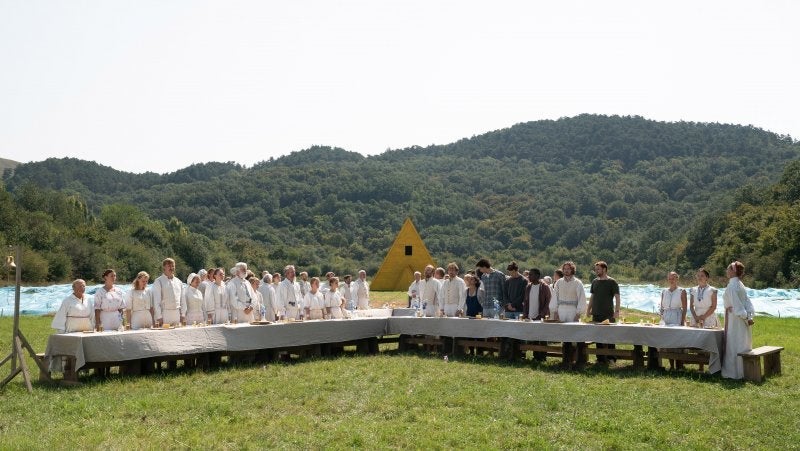 The next morning, when I told my hosts about their predatory friend, they immediately ousted him. Their response is typical of the sober rationality and humanity of the many Swedes I know and love. But I see a line running from Aster’s film to the reality of Midsommar as a rare site of chaos in Swedish society, where suppressed violence bubbles to the surface. This paradox helps explain how Sweden can be both held up as a paragon of gender equality and have some of the highest statistics for sexual harassment in the Europe. During the topsy-turvy Midsommar celebrations, society is turned on its head: in the film, the camera literally turns upside-down as the Americans enter Hälsingland.

Bar Christmas, the two biggest celebrations in the Swedish calendar – Midsommar and Valborg – both have their roots in the pagan tradition. Valborg marks the end of winter and historically involves burning a bonfire to ward off evil spirits; Midsommar stems from pagan celebrations of light and fertility. Today, when celebrated by large groups of friends, both share one central principle: getting absolutely wrecked.

In 1955, the state-run chain of liquor stores, Systembolaget, opened in Sweden. Introduced to curb alcohol consumption – including Swedes self-medicating in the harshness of winter – it operates a strict monopoly, making it the only place Swedes can buy booze.With its limited opening hours, it isn’t possible to run to the off licence at 10.30pm to pick up another bottle. So everyone stocks up, especially during public holidays when everything closes for several days. Swedish society is usually subdued and restrained: the Midsommar celebrations sanction an extreme loss of inhibition in the name of heritage and tradition. It’s a cocktail for chaos.

But outside of the chaotic world of Midsommar, in ordinary, ordered Swedish society, nightlife faces resistance. In the capital, the music venue Debaser is embattled in an ongoing dispute over noise complaints, and queer bar Bitter Pills was recently forced to close down. On the eve of their closing party, a man incensed by their open frivolity brought his air rifle to the window, aiming it at the bar from across the street. In the film, the Hårga show a reverence for ritualised, shared quiet. Undesirable noise is stifled when it surfaces at the “wrong” moment, but sanctioned shouts or moans erupt collectively from commune at the “right” time. Stood around the table in painstaking silence, waiting for the Midsommar lunch, Christian asks when the feast will begin, to which Swedish Pelle whispers: “We’re going to stand until it’s right to sit.”

Initially, Aster’s film offers a glimpse of a supposedly harmonious community. Dani arrives smiling in awe at an almost-celestial scene, as men and women garden, cook, and rear children together. In the US she is forced to stifle her grief over the death of her sister and parents in front of her cowardly boyfriend and his dumbly misogynistic friends, who are unsettled by the depths of her emotions. But in Sweden her feelings are welcomed and shared by a new kind of family: one that encourages lingering hugs, frenzied dancing, synchronised breathing, and communal wails of despair. Men even wear “frocks” in a nod to the “hermaphroditic” qualities of nature.

In reality, Sweden makes a great show of its gender equality, calling itself “the world’s first feminist government”. Dads negotiate prams onto city buses during the week. No one has ever shouted “tits ahoy!” at me from a van. But Midsommar is a reminder of the intense uneasiness that stews beneath the surface. The longer I live here, the more I see the dark in the light.