March 2019: a woman is standing in front of some Swatch watches on a daytime TV antiques show. The presenter asks which is her favourite. “Probably this one,” she answers, pointing to a watch adorned with a cartoon barking mutt. “I just like the dog – it makes me smile.” The story of how Keith Haring’s symbols became so ubiquitous that they ended up on the wrists of Middle England as much as on the bedroom walls of 1980s Aids activists is both the contradiction and the genius of the New York street artist, whose star burned fast and acid bright.

Tate Liverpool’s superb retrospective traces Haring’s ten-year flight from street artist to global consumer brand, from scrawling on the subway to painting the Berlin Wall, and details the turbulent political backdrop behind his work. We know many of his motifs well – the dog, the crawling baby, the three-eyed face – his thick black lines and dancing figures, but there’s nothing superficial about these deceptively simple scrawls.

They’re angry, anguished and urgent, as well as being joyous and optimistic. Apartheid, homophobia, HIV; hedonism, sexual liberation and the power of love. His influences range across cartoons, hip hop, video games, Egyptian hieroglyphics, Japanese calligraphy and Art Brut. Above all they fizz with a relentless energy; the feeling that Haring is in a (very real) race against time to cover every surface. 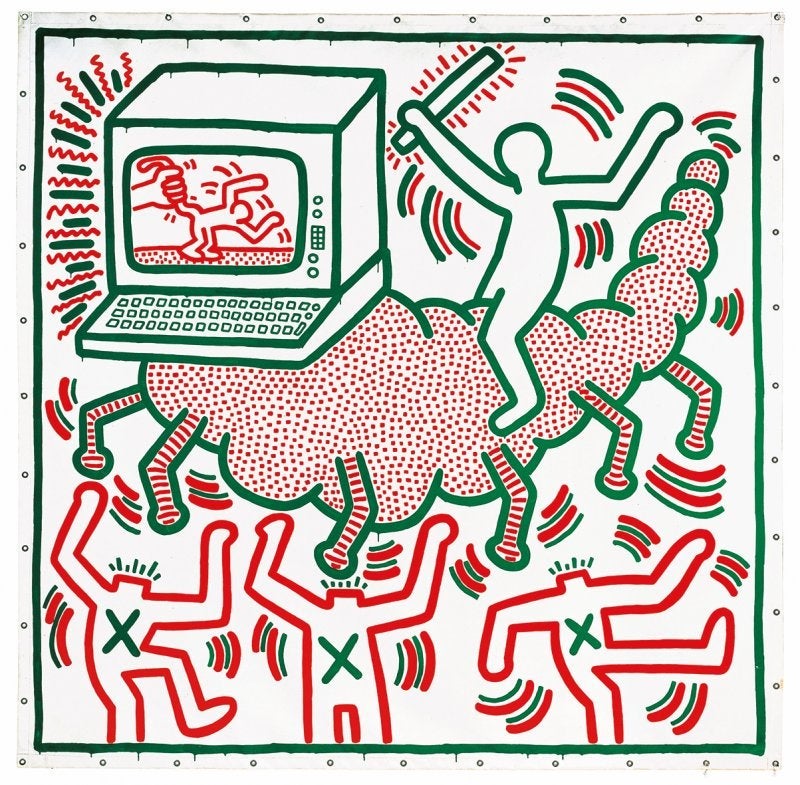 Having moved from small-town Pennsylvania to New York in 1978 to go to art college, he began honing an artistic language that used symbols to express his social message. The subway became his canvas. While other graffiti artists were spraying paint on walls, Haring chose white chalk for his strikingly effective sketches, like post-industrial cave paintings, allowing him to reach the largest and most diverse possible audience.

And they were certainly noticed. Videos showing commuters’ reactions to his guerrilla art are amusing to watch: some disapproving, others enthralled. What is striking is the grimness of the setting: early-1980s New York was hollowed out, depressed and bankrupt. In contrast, Haring’s work is overwhelmingly positive – a gift to the public. Alongside the pulsating bodies and TVs, the robots and breakdancers, come cheering messages: “New Year ’84”, “Happy Valentine’s”, “Still alive in ’85”.

Haring used workers’ tarpaulins as cheap alternatives to canvases. Untitled ’82 has the swirling imagery of nuclear energy with the colours of tribal art; another depicts violent religious iconography. Others comment on atrocities in apartheid South Africa, or on capitalist greed. Alongside these are posters for CND marches and Africa benefits or against crack – which had started to grip the marginalised communities of the 1980s. 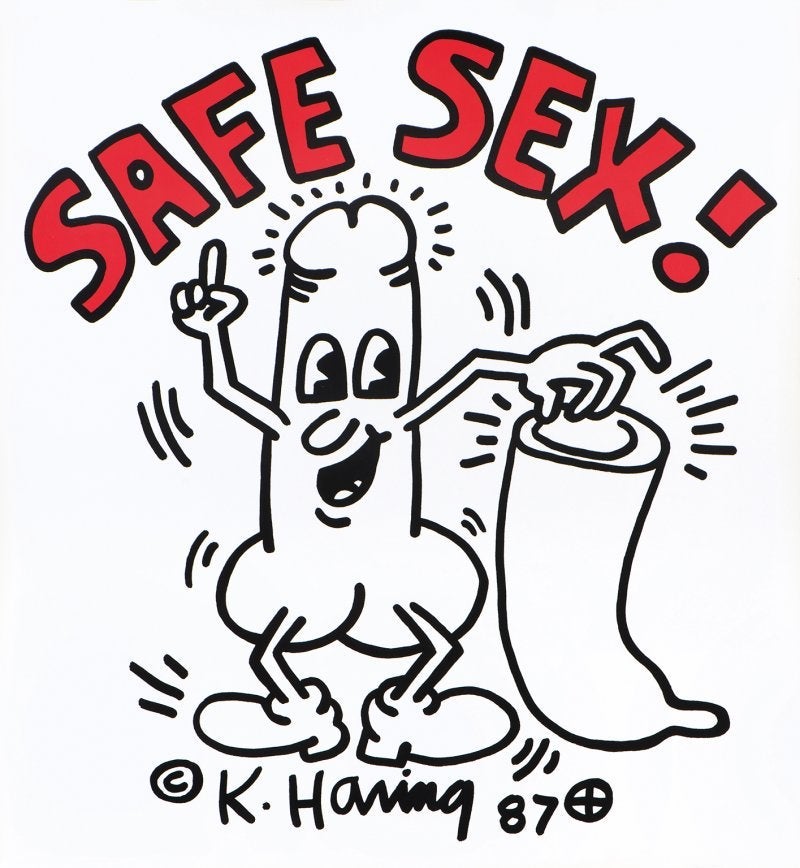 Later, we feel the vibrant, creative atmosphere of the East Village and the DIY aesthetic of its occupants. In some of his more homoerotic drawings, there’s the sense of a pre-Aids gay liberation in a city where cruising was everywhere. Haring’s own image is cheekily homoerotic too: peaked caps, tight tees, sneakers, cut-off shorts.

The development of his visual vocabulary is shown in a series of early-1980s works, all of which he saw as drawings regardless of whether they are ink or acrylic. But perhaps we can see them as writings, too. There’s a meditative quality to returning time and again to the same codified symbols – but also reassurance, a sense of them as protective shields. The baby: a symbol of purity and optimism. The dog: protector, predator and warning. The flying saucer: source of mysterious energy. The crucifix: a tool of control and oppression.

By the mid-1980s, Haring was a phenomenon. We see his vast public murals, his “Pop Shops”, his tie-ins with Vivienne Westwood and body-painting of Grace Jones. Like Warhol, who’d become a mentor, Haring had gone from counterculture to consumer brand. Unlike Warhol, Haring remained defiantly political. 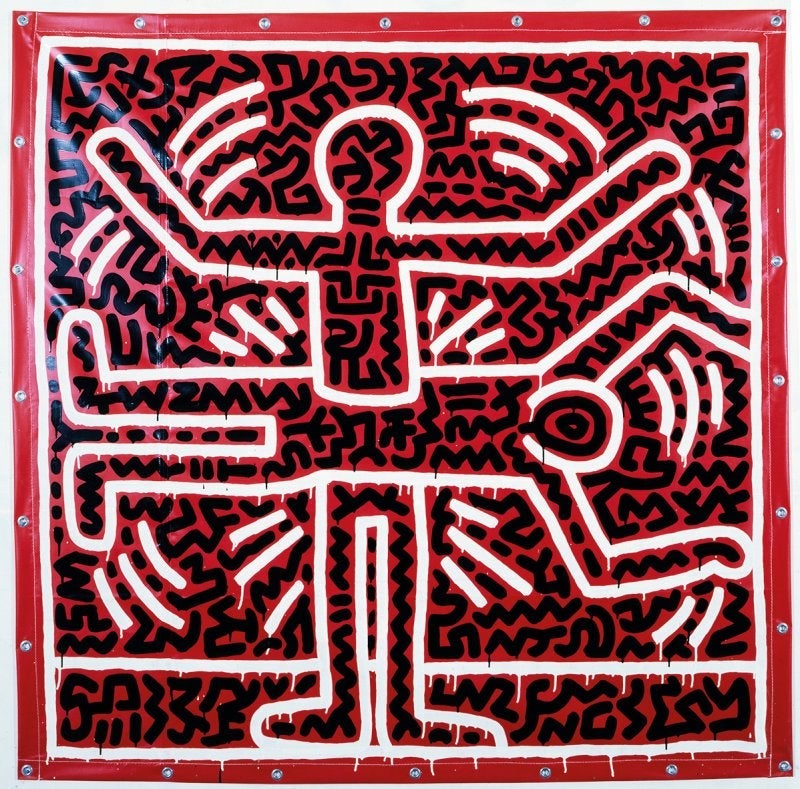 Never so much as in his later work. In 1988 he was diagnosed HIV positive. Some of his pieces from this time take a turn for the darker. In the blood-red Untitled 87, disease erupts from an ailing human body; ten monochrome drawings depict the virus as black “demon sperm”. But he was also using his platform for positive activism, throwing himself into the Act Up protests against the inertia of the Reagan government. Some of the most memorable imagery from the era – still seen at protests and Pride parades – is by him: the “Ignorance = Fear” poster, the reclaimed pink triangle or “Safe Sex”.

In the year of his diagnosis, he made a poster for National Coming Out Day, in which a yellow figure emerges – ta-dah! – from a closet. At a time when the media depiction of gay men was relentlessly toxic, it’s a splash of optimism, an exhortation to soldier on. He would die two years later, aged 31. In this 50th anniversary year of Stonewall it often feels we need his honest, urgent, exuberant imagery more than ever.

The exhibition runs until 10 November