The moment Toulouse-Lautrec realised that his posters extolling the delights of the Moulin Rouge and Paris café culture were regarded not as mere advertising but as art came when collectors started unpeeling them from Montmartre’s street hoardings. There was nothing new about the link between art and advertising – John Everett Millais’s A Child’s World became famous when it was rechristened Bubbles and used to sell Pears soap – but the idea of posters as a bona fide art form was a novelty.

While Lautrec and Alphonse Mucha in Paris produced images full of art nouveau colour and life, it was a pair of British artists who gave the poster its most radical treatment. The graphics of J & W Beggarstaff were pared down to only essential lines and monotones: they were all about the omission of extraneous detail, three dimensionality and decorous colour and composition. In its simplicity and clarity their work anticipated the modernist aesthetic by a decade.

The Beggarstaffs were not, in fact, brothers but brothers-in-law, James Pryde and William Nicholson. They set up their design business in 1894. Nicholson had eloped with his fellow art student Mabel Pryde and they were sequestered in a former pub, the Eight Bells at Denham in Buckinghamshire. When Pryde went to visit his sister he ended up staying for two years and the partnership was established.

The two men were of very different temperaments: Nicholson, known as “the kid” because of his youthful looks, was a workaholic dandy who viewed his art with the utmost seriousness; Pryde was a bohemian raconteur and amateur actor who sought out company – high and low – partly to deflect his depressive tendencies. He lived, he said, with “one foot in the grave and the other on a banana skin”. As for the Beggarstaff name, Nicholson recalled: “Pryde and I came across it one day in an old stable, on a sack of fodder. It is a good, hearty, old English name and it appealed to us, so we adopted it immediately.”

The pair were together for only five years before returning to their solo work and although their partnership was a financial failure, it nevertheless changed the nature of what graphic design could be. So it is extraordinary that the wonderful new exhibition at the Fitzwilliam Museum in Cambridge is the first to celebrate the brothers-in-law’s joint output. In fact it is three exhibitions in one: the Beggarstaffs and small retrospectives of both Nicholson and Pryde. 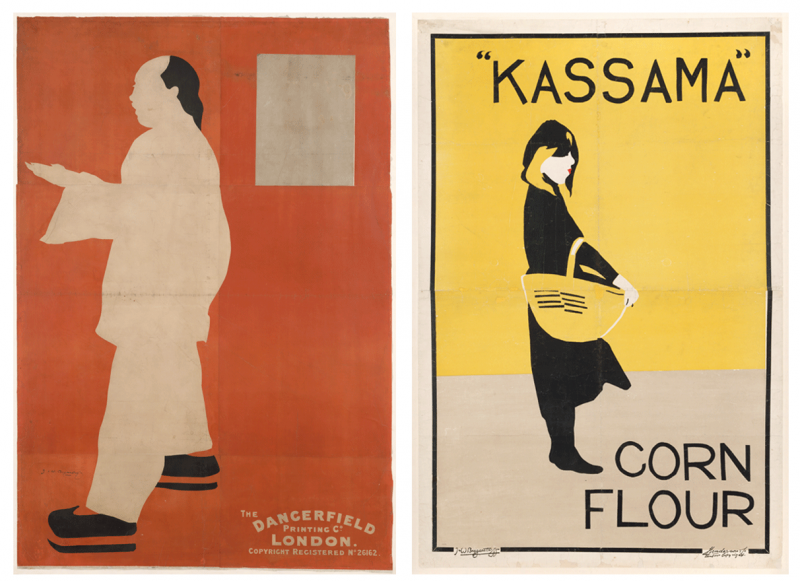 Pryde believed that Beggarstaff posters should have an effect even while glimpsed from a moving “horse-bus” and indeed they did, but they were perhaps too original to work. For their first poster, for Hamlet starring their friend Edward Gordon Craig (the son of Ellen Terry), Pryde and Nicholson came up with an avant-garde technique of designing on large sheets of brown wrapping paper on which they arranged cut-out shapes to build collages. They tended to work speculatively rather than to commission, producing posters for “Nobody’s washing blue” and “Nobody’s candles” where they hoped an interested manufacturer’s name could simply be inserted.

One commissioned design, for the grand actor-manager Henry Irving’s production of Don Quixote, was rejected because he said “it had a bad likeness”. He later confessed that the real reason was that it was a mediocre play that he feared would fold and he wanted to save himself the expense of printing the posters. So at the end of five years, the Beggarstaffs had garnered more critical acclaim than commercial success.

Nicholson went on to eminence as a portraitist, landscapist, painter of luscious still-lifes, book illustrator and creator of instantly recognisable prints, such as his self-portrait A Was an Artist. At one point he gave painting lessons to Winston Churchill, who revered him as a teacher. He was also the father of one of Britain’s most significant 20th-century artists, Ben Nicholson. While “the kid” hardly needs his reputation buffing, Pryde certainly does.

One of the many merits of this imagina-tive and affecting show is that it brings together a selection of Pryde’s strange and haunting paintings of crumbling architecture, huge arches towering over tiny people and vertiginous four-poster beds which, in a series he called “The Human Comedy” in honour of Balzac, serve as the backdrop for the stages of a blighted existence – visits from the bailiff, the doctor and finally Death himself. They are looming, operatic and unsettling, and echo both Piranesi’s prison prints and Hogarth’s “modern moral progresses” featuring the Rake and the Harlot.

Pryde’s own progress was downwards. He and Nicholson had drifted apart when Mabel died in the Spanish influenza epidemic of 1918. As the years advanced, he could barely motivate himself to work and had to be kept afloat by the largesse of admiring fellow artists. He was eventually found unconscious and withered in his studio, and died in 1941 a literal and reputational shadow of the man who had made such a distinctive contribution to British art. This exhibition restores James Pryde as well as J Beggarstaff.