If the official history of American art in the 1960s and 1970s is one dominated by pop and minimalism, New York and LA, America’s third city was nurturing a group of artists all its own. The so-called Chicago imagists developed a figurative style that is a unique mash-up of comic book imagery, psychedelia, folk art and surrealism – it’s brash, it’s bright, it’s lurid, it’s often grotesque and it’s very funny.

The artists studied at the School of the Art Institute of Chicago during the 1960s, then housed in the basement of the art institute – a vast museum with a collection ranging from classical to modern art that inspired and influenced their work. They also made visits to the Oriental Institute and Field Museum to learn about anthropology and natural history. In the urban landscape they inhabited, the group was bombarded with the bright graphics of posters, seedy fairgrounds and pinball machines. Forward-thinking tutors included non-Western and outsider art in their classes, encouraging students to travel and collect. 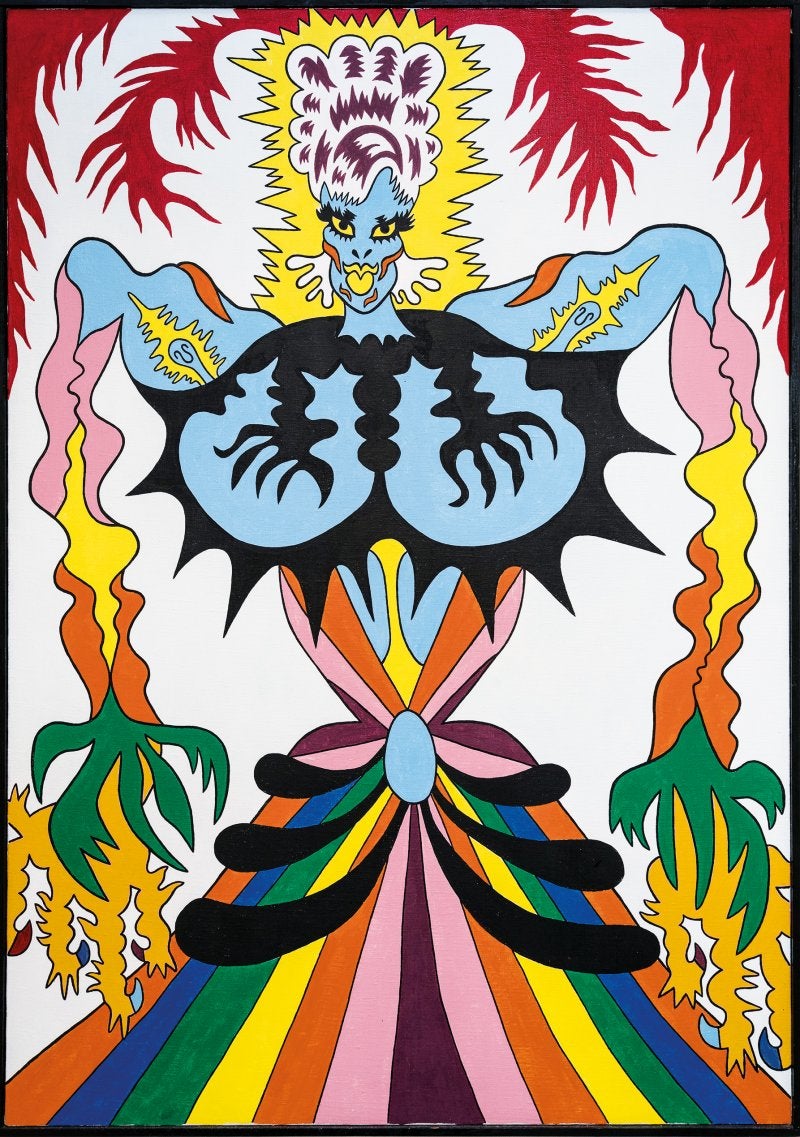 Although the artists’ individual styles vary widely, this omnivorous grounding, free from fine art hierarchy, gives their work a similar magpie quality that is pleasingly hard to pin down. They also have in common vivid colour and a hard-edged precision that’s a world away from the wild splashes of the abstract expressionists. Despite the era of social change in which they came of age, their work is not overtly political, focusing on personal expression. Nonetheless, by holding a mirror to the youth culture that surrounded them, they made wry and acerbic comments on 1960s society.

In 1966, six of these students were given a show at the city’s Hyde Park Art Center, and the Chicago imagists were launched. They called it Hairy Who, an anarchic title that was a piss-take of the high-minded titles of some contemporaries. Instead of catalogues, they produced comic-book publications. This was the first of many group shows at the alternative art space that would become their natural home. In 1980, Britain first got a taste of the movement with the show Who Chicago?, which toured from Sunderland Arts Centre to Camden Arts Centre and Edinburgh’s Gallery of Modern Art. 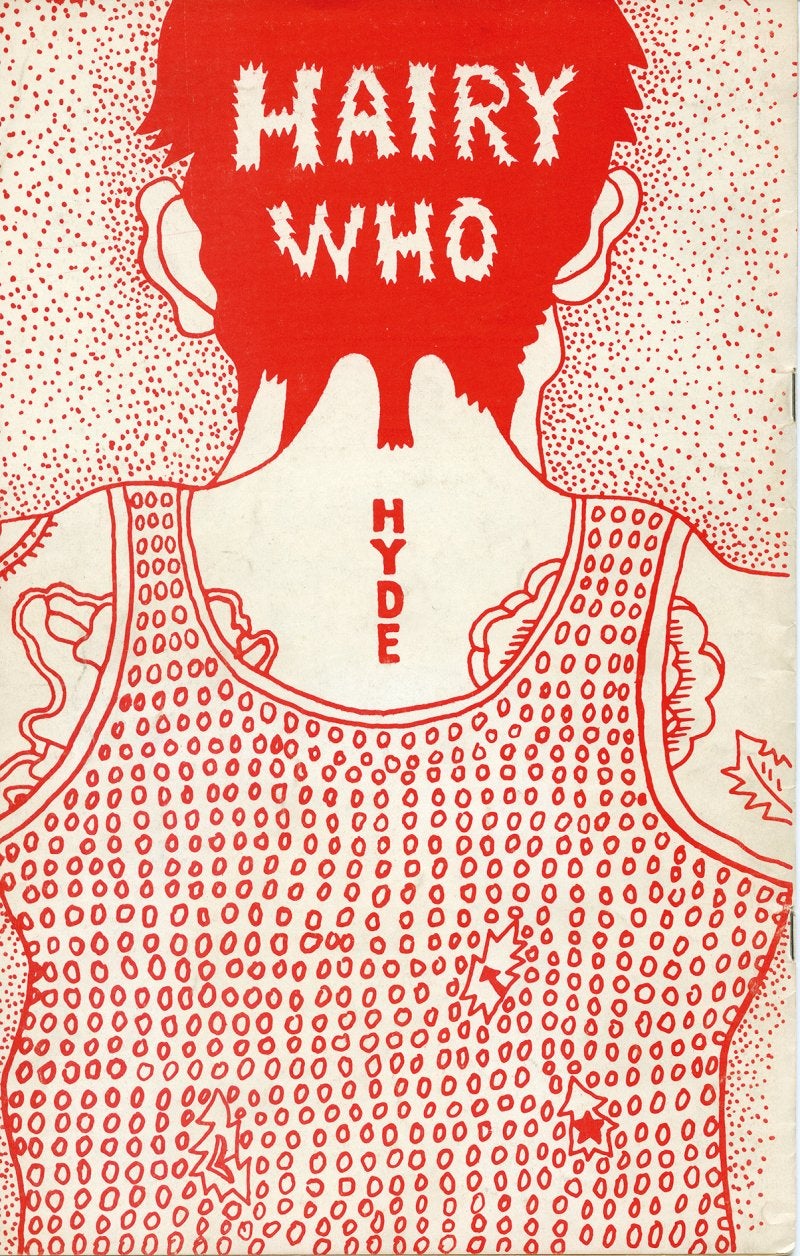 Back cover for The Portable Hairy Who! (1966) by Karl Wirsum. Credit: The School of Art Institute of Chicago

Goldsmiths Centre for Contemporary Art opened last year in a former Victorian swimming baths in south London, and looks over the art school’s studios within the old pool itself. Its integration in the university mirrors the imagists’ own cohesion as graduates of one school and the close relationship with their teachers – in particular Ray Yoshida, both a mentor and ultimately part of the group.

The first work is Untitled (1972) by Yoshida, who took his inspiration from thrift store finds, tribal masks and collected toys. Here we see an imagined sequence of mutating organic forms, arranged in rows like botanical classification. Elsewhere he makes strange collages of body parts from comic strips and heavily outlined, jarring shapes – all with a muted, folky palette. His unconventional, melancholic style was a huge influence on those he taught.

Roger Brown also takes motifs from folk art as well as the repeat patterns of graphic design. His work is imbued with a sense of alienation in cityscapes and suburban sprawl. In The Four Seasons (1974) – a four-panel depiction of the Hyde Park Art Center at night, its windows lit up yellow with silhouetted people glimpsed inside – he is the outsider looking in, Hopper-like. The same house motif is painted on to Mask for Waitress (1974): made out of a mop, a box and cutlery, it is both totemic and seems to prefigure the po-mo furniture of the Memphis group. Misty Morning (1975), with its hazy green hillocks, recalls fabric design and is punctuated by a solitary grey truck – its cab window emitting the same sodium glow. 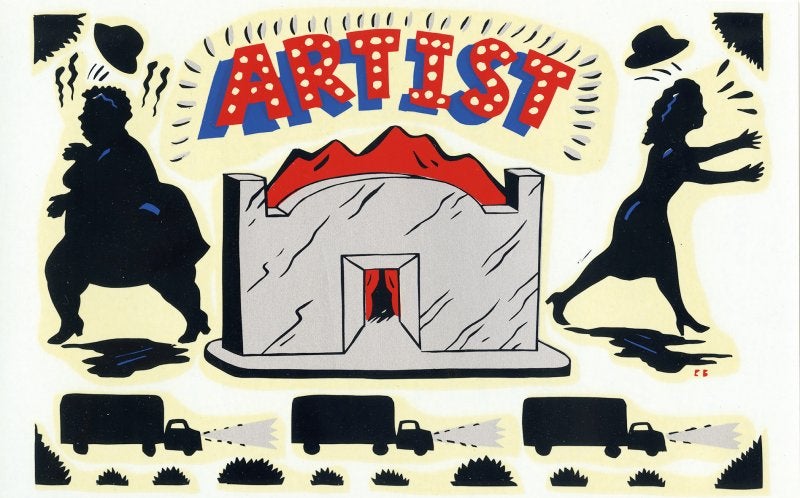 Gladys Nilsson has a more painterly and immediately humorous outlook, her work crammed with outlandish cartoonish forms. The pastel watercolour More Fowl Beasts (1970) is populated by grotesquely entangled birds and monsters, comical yet nightmarish. In A Cold Mouth (1968), reverse-painted on Plexiglas – a popular medium of the group – distorted duck-like heads, limbs and mechanical slugs crowd around consuming each other. Her monochrome sketches Rented Bathing Suits (1965) and Untitled (Boots) (1969), though absurdist, are rooted more in social observation. 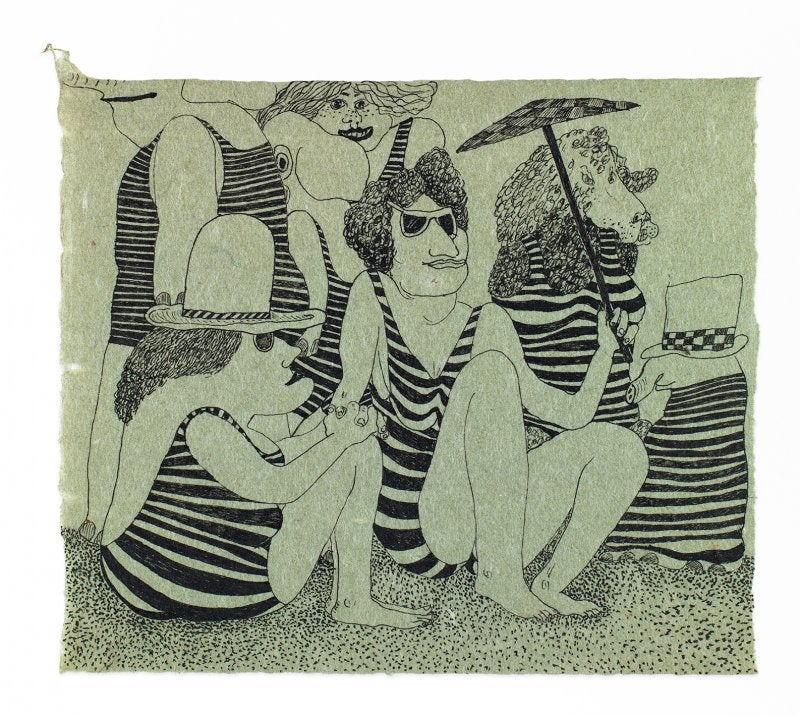 Nilsson’s husband Jim Nutt’s pieces are similarly cartoon-like, with glossy flat surfaces and colours that reference pinball machines. The distorted, clownish Snooper Trooper (1967) and Officer Doodit (1968) satirise army personnel both in their depictions and punning titles; while He Snort (1969) is a comical take on drug taking.

Jim Falconer’s work, with its circus primary colours, handwriting and freaky characters, is bold and playful. Untitled (1966) shows a hairy figure who sarcastically proclaims: “We just love your paintings”;  while in another Untitled (1966) a grimly smiling woman is enveloped threateningly by pneumatic arms. Perhaps most comic-inspired and dazzlingly graphic is the work of Karl Wirsum, referencing everything from blues music to festival posters, Mexican art to Dadaism. Paintings such as Screamin’ Jay Hawkins (1968) and Show Girl (1969) explode around you with their throbbing rainbow psychedelics. This show is a riot but it’s also touching in its sense of optimism and boundless possibility – I’d encourage you to go-go Chicago.

“How Chicago!” runs at the CCA until 27 May, and at De La Warr Pavilion in Bexhill-on-Sea from 15 June to 8 September

This article appears in the 10 Apr 2019 issue of the New Statesman, System failure