Britain’s video game arcades, having been at last evicted from our cities, are now mostly found chirruping on piers in lonesome seaside towns. It’s been a lingering decline. Once upon a time the arcade was the only place in which the video game could be encountered (aside from, perhaps, a date with a squatter on one of the room-sized mainframe computers found on affluent university campuses in the 1970s). But today the video game is ubiquitous, both in homes and in pockets (where a smartphone filled with Angry Birds, Crossy Road and all the Adjective-y others provides a miniature, on-board arcade for the contemporary human). We don’t, in other words, get out so much these days, when it comes to video games. Ergo, the arcade has become a defunct entertainment venue, like Blockbuster Video, Tower Records, the hanging gallows, or the increasingly forsaken cinema.

It’s difficult to quantify the loss. On the one hand these dens of smoke and truancy were never places associated with virtue. Martin Amis, in his 1982 book Invasion of the Space Invaders, wrote: “There is much cheerless in watching the way sub-teens busy themselves in the arcades. The impatience, the knowingness, the ever-ready anger and frustration…” (At the time, of course, Amis was himself a prominent arcade-goer.) But there was also delight and spectacle to be found atop the beery carpet. The arcade was the video game medium’s live music venue; players performed to crowds, showboating their talent for virtual fighting, dancing or driving, often drawing gasps of envy from captivated watchers.

This performative aspect to games has now moved to the stadium arena, where young, semi-professional cyber-athletes compete in video games on stages loaned from real world sport (for example, last year’s League of Legends final was held at the Sangam Stadium in Seoul, the cavernous location in which the 2002 FIFA World Cup final took place). But the local pitch has, in the arcade’s decline, almost entirely disappeared. We now have to face the wilds of Twitch or YouTube if we want to see similar acts of virtual genius. 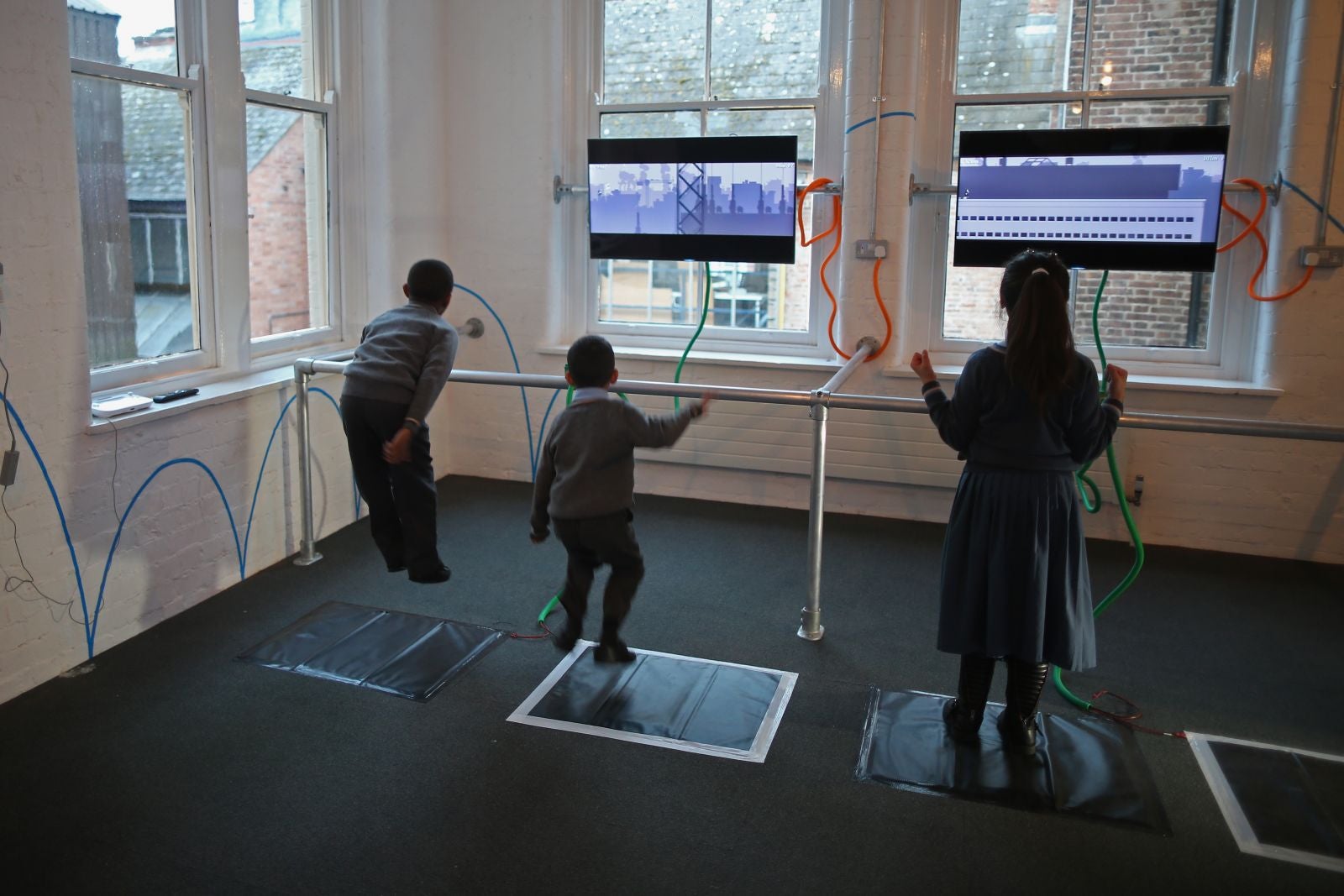 Children create their own jumps at the NVA. Photo: Christopher Furlong/Getty Images

The launch of the National Videogame Arcade in Nottingham on Saturday, a five-storey centre for all things video game (and one that, notably, hopes to bring £2.5m to the local economy during the next five years) will not fill that particular vacancy. This grand and noble project, the brainchild of the organisers of the Nottingham GameCity festival, the closest the game industry has to an Edinburgh, has different kinds of ambitions.

“We want to inspire people with the sheer breadth of what games can be,” says Jonathan Smith, the NVA’s co-director, and co-creator of the apocalyptically popular series of Lego games based on diamond-grade film licenses such as Star Wars, Lord of the Rings, Indiana Jones and others. “We are at the point at which most people have a particularly game that they like and maybe even love. But we want to remind everyone that there is a wealth of unexplored country out there; if you feel you have permission to explore, you will find exciting and interesting things.”

The NVA is filled with such interesting things, games culled from the past four decades (all arranged in a higgledy mess – “we like the juxtaposition of old and new”, says Smith. “And children are interested in new game experiences, regardless of when and where they originated”), as well as hands-on exhibits commissioned by and for the centre. One, Mission Control, fills an entire room (situated just after you’ve bruised your hands hammering the buttons an original Track & Field arcade cabinet). Two players duke it out on a vast screen while up to ten bystanders change the nature and rules of the game by flicking switches. It’s possible to scan in drawings to see the images appear in the game as an enemy, even while it’s being played live. The game is designed to illustrate to visitors some of the ways in which video games are made, and how designers tweak their rules and assets to find the fun.

“Jump!”, the NVA’s debut exhibition, continues the theme. It’s a curious deep dive into one of the most common interactions found in video games (players are able to compare classic “jumps” from across the decades, everyone from Super Mario to Halo’s protagonist Master Chief – née John – gets to strut their stuff) and even design their own virtual jump, by setting the angle, mass, gravity and power of an on-screen environment, then launching a digital character into space (their trajectory triggered, of course, by jumping onto a floor mat controller). 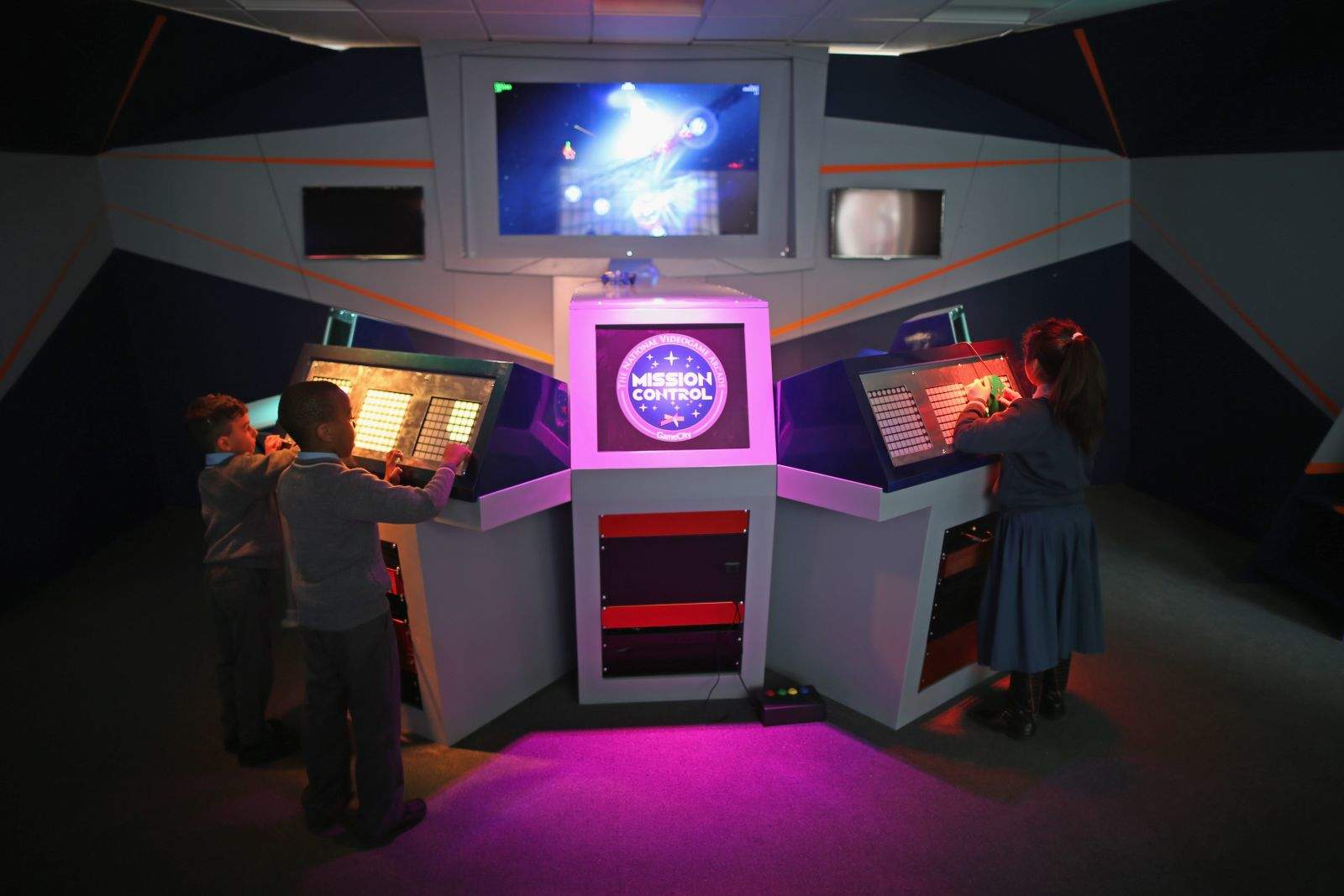 Indeed, the NVA’s founders hope that the centre will convert a curiosity in game play into a curiosity in game creation. The co-founders hope, furthermore, to demystify the act of game making. “Games are not bolts of lightening handed down by the gods, or things that roll off a faceless factory in America or Japan,” says Smith. “They are made by people, who are constantly leaning and trying to do the best they can. We want to demonstrate that everyone can participate in that process in some way. Everyone can make games.” That process will be further encouraged by programming workshops, game jam evenings (when people are invited to make small games, usually to a set theme – the first will be “jumping”) and a programme for schools to partake in.

This is the NVA’s practical ambition. In loftier terms, it hopes to shift the video game medium farther into cultural territory. Video games are undeniably a colossal feature on the contemporary landscape – and not just in those oft-repeated financial terms. They are played and, thanks to the rapid democratisation of game development and distribution, made by an increasingly diverse congregation, and explore increasingly diverse themes. But they are rarely considered in cultural terms so much as technological ones. Of course, video games encompass both the arts and the sciences, but they are predominantly viewed through the latter lens, not least because the medium’s evolution has been so closely tied with technological ascent.

So too, of course, has literature, film and photography (all of which are possible only thanks to supporting technologies). But in video games the technology has a more drastic and obvious effect on the art both in affecting style and scope. For this reason video game coverage is usually kettled into the “science and technology” sections of publications, rarely arts and culture. The NVA hopes to change this. “The industry will welcome this arcade because it sends a great positive message to parents, teachers, guardians, media and governments about the fact that games are more than entertainment,” says Ian Livingstone, CBE, who has been involved in the NVA’s development. “Games have cultural significance. We can celebrate that here.”

Perhaps, then, video games do need some premises after all. The eradication of the old arcades has removed the idea of video games from our landscape, a largely unnoticeable erasure because games are made of virtual stuff anyway. But there is value in physical representation (as the Protestants quickly discovered after they grimly tore down church buildings post-Reformation: out-of-sight often equals out-of-mind). An institution like the NVA, so prominently situated in the centre of a major British city, gives the video game a place on the landscape again, one that’s cleaner, more respectable and more approachable than the arcades of old, but no less gratifying to visit.