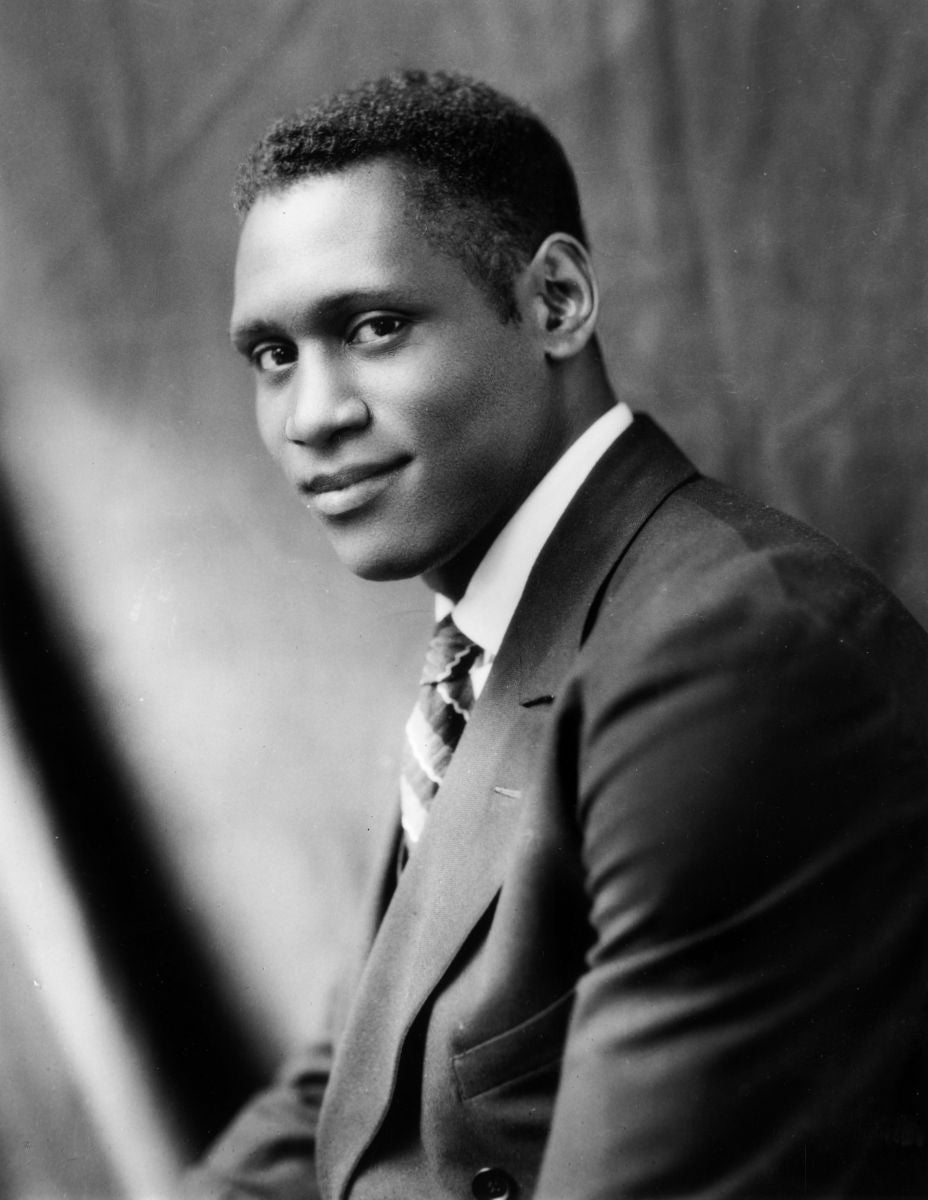 Paul Robeson had a voice that thundered. Image: Getty

One evening in May 1944, Paul Robeson rushed north-eastwards from the Shubert Theatre in midtown Manhattan to a radio studio half a dozen blocks away, still dressed for the stage as Othello. The programme he’d been invited to take part in – a 30-minute broadcast on the contribution of black Americans to the war effort – was sponsored by the Emergency Committee of the Entertainment Industry, an early minority rights group that counted Orson Welles, Lena Horne and Groucho Marx among its members.

A journalist present at the studio when Robeson arrived noted that his mock-Moorish robes had caused him “much . . . embarrassment” – but if he did feel any discomfort, all trace of it was lost in the short distance between mouth and microphone. It was a stirring show. The presenter asked Robeson how “Negro pilots” serving in the US air force in the skies above Germany might greet the ghost of Abraham Lincoln, if they could. In his rich baritone, the actor pronounced: “I think they’d say, ‘We’re carrying on, Abe. We’re in there. You set us marching toward freedom and we’re marching with the world.’”

This story, which I came across in The Politics of Paul Robeson’s Othello (2011) by Lindsey R Swindall, isn’t included in Jordan Goodman’s new biography but it contains an ironic charge that affected my reading of the book. For here was Robeson being asked to speak on behalf of African Americans and of those in the armed forces in particular; though this broadcast came and went without much incident, a similar statement made by the actor at a communist-affiliated peace conference in Paris five years later proved his undoing. The question of whether Robeson – an open admirer of the Soviet Union – could legitimately represent the interests of “the Negro people” of America became an ideological battleground that for decades divided progressive opinion.

Goodman charts the vast distance, in geopolitical terms, between 1944 and 1949. The postwar settlement in which “the United States, Great Britain and the Soviet Union sat side by side deciding on the shape of the world to come” was, he writes, a “faint memory” by the end of that decade. In place of friendship was a new tension between the victor nations, as the foundations for the cold war were rapidly laid down. The Truman doctrine’s emphasis on preventing the spread of Soviet influence through military aid allowed Russia initially to claim the moral high ground, branding its various international interventions as part of a “struggle for peace”. Meanwhile, communism’s professed distaste for colonialism and racism appealed to many in the Atlanticist west, from Labour Party members and trade unionists in Britain to US black rights activists such as Robeson.

Paul Robeson was born in New Jersey in 1898, the son of a runaway slave from North Carolina. After a distinguished high school and college career as an athlete, he found fame onstage as an actor and singer (he starred in two Eugene O’Neill plays, All God’s Chillun Got Wings and The Emperor Jones); by the 1930s, he was the best-known black entertainer in the world. His swift rise was in no small part due to the success of Jerome Kern’s and Oscar Hammerstein’s musical Show Boat – written with Robeson in mind – which has at its heart the song that became his signature tune, “Ol’ Man River”.

As soon as he could, Robeson put his name to work in the service of civil rights and a tentatively Marxist variety of socialism. (“It is only when I went to the Soviet Union that I felt human,” he said in 1949, though it’s unlikely he ever joined the Communist Party.) His show-stopping interventions on the political as well as the theatrical stage won him a wide range of admirers, from Prime Minister Jawaharlal Nehru of India to Albert Einstein – but they also attracted the unwanted attentions of the FBI and US state department. In his later life, Robeson engaged in a gruelling succession of legal battles with the US government, which had voided his passport in a paranoid plot to silence him.

A Watched Man is a compelling account and it is right to focus on Robeson’s public battles, though one failing is that it bolsters the myth without shedding much light on the man behind it. (We learn little about his wife, Essie; his infidelities with Peggy Ashcroft, Yolande Jackson and others are not even mentioned.) But that’s perhaps an unfair quibble, since Goodman’s principal aim here is to offer a corrective to the apathy of a contemporary world “where civil liberties, won against fierce opposition, are being eroded . . . and where individual movement is increasingly seen as suspicious”.

Robeson was and remains important because his conception of justice was based on something as simple as our fundamental right to dignity. A true American, he had a Whitman-esque belief in the commonality of human experience, regardless of background or race. (“I realised that the fight of my Negro people in America and the fight of the oppressed workers everywhere was the same struggle,” he said of his political awakening.) The ability of his politics to contain multitudes made him a icon to rebels in the Spanish civil war, to miners in Britain, to anti-lynching marchers in the American south and to all those who heard in his voice a spirit of defiance undimmed by the persecution of his people – and by “his people”, I mean us all.