The new film Before Midnight brings prickly realism to a trilogy that began 18 years ago as a purely wistful romance between a French woman, Céline (Julie Delpy), and an American man, Jesse (Ethan Hawke). It’s surely the most melancholic ticket in town, though it is not without competition from Stephen Sondheim’s Merrily We Roll Along, which is enjoying a spectacular revival in London.

That musical draws its mighty emotional weight from a counter-chronological structure. The story makes a series of backwards leaps every three or four years from 1976 to 1957, producing a contradictory flavour: the optimism of its last scene is undercut by our knowledge, unavailable to the characters, of the crises and compromises to come. Anyone who has reached the age of 40 or so could likely build similar material from crossroads moments in their own lives, though chances are the songs wouldn’t be quite as hummable.

Or they could turn instead to the Before films. Richard Linklater’s trilogy drops anchor at nine-yearly intervals in the lives of Céline and Jesse. We have already seen them in their boundless twenties in Before Sunrise (1995) and their disillusioned but still-hopeful thirties in Before Sunset (2004). (In between those movies, they also made a fleeting appearance in Linklater’s 2001 rotoscope animation Waking Life.) Before Midnight is a despatch from their battle-scarred forties.

They first met on a train in Before Sunrise. Jesse convinced Céline that she should disembark with him in Vienna, where he had to kill time before his flight back to the US the following morning. When it seemed she might be wavering in her decision, he rather cleverly invited her to picture herself many years in the future, looking back from a possibly unsatisfactory marriage and wondering what might have happened had she alighted from the train with him. So began the chatterbox courtship of Céline and Jesse – their names deliberately evoking another pair of time-travellers in Jacques Rivette’s 1975 masterpiece Céline and Julie Go Boating.

Time is central to these movies. There’s always the impending deadline of a flight; in each film, someone has a plane to catch back to the US. Mortality loomed large from the pair’s earliest conversations, as it always does when the young advertise their seriousness to those they hope to sleep with. In Before Sunrise, Jesse announced his idea for a television show that would record uneventful lives 24 hours a day. (Four years later, Big Brother began its unstoppable run. Thanks for nothing, Jesse.) When the couple parted at the end of the film, they refused puritanically to exchange phone numbers and didn’t swap Facebook details because Mark Zuckerberg was only ten years old. Instead, they made a promise to meet again in Vienna in six months’ time. With no plans to continue the story, audiences were left dangling.

Nine years later, Before Sunset joined Jesse in Paris, where he was promoting his debut novel based on the events depicted in the first movie; Céline stopped by the bookshop and the pair used the next hour or so to catch up. Jesse, it turned out, had shown up that day in Vienna as planned; Céline had not. She blamed Jesse angrily for inflating her romantic expectations with that one magical night; Jesse mourned the joyless marriage he was now enduring with the mother of his child. In the process, he delivered a bitter aperçu that inspired more instances of sympathetic nodding among middle-aged couples than any other line in modern cinema: “I feel like I’m running a small nursery with someone I used to date.”

The components of the idea may not be unique: Before Sunrise is really a Generation X rerun of The Clock, Vincente Minnelli’s 1945 film about a shore-leave romance. But combined with the trilogy’s roaming camerawork and formalist tidiness (each film, for example, takes place in a different European location), something original has emerged. François Truffaut returned to his alter-ego Antoine Doinel on four further occasions after The 400 Blows in 1959. But to trace two characters over a period of almost 20 years, with their meandering conversations at the centre of the drama, is without precedent.

Even in the mid-1990s, when the quotable screenplay for Pulp Fiction sold like a boyband album, Before Sunrise was still a striking proposition: it was, literally, all talk. Céline and Jesse roamed around and rabbited on, the unobtrusive camera hanging on every word. For anyone who has kept faith with the couple over the years, wondering idly what they might be up to, feeling even that we have a genuine stake in their happiness, Before Midnight is difficult viewing. The romance of their initial connection has not insulated them from the same humdrum disappointments as anyone else. 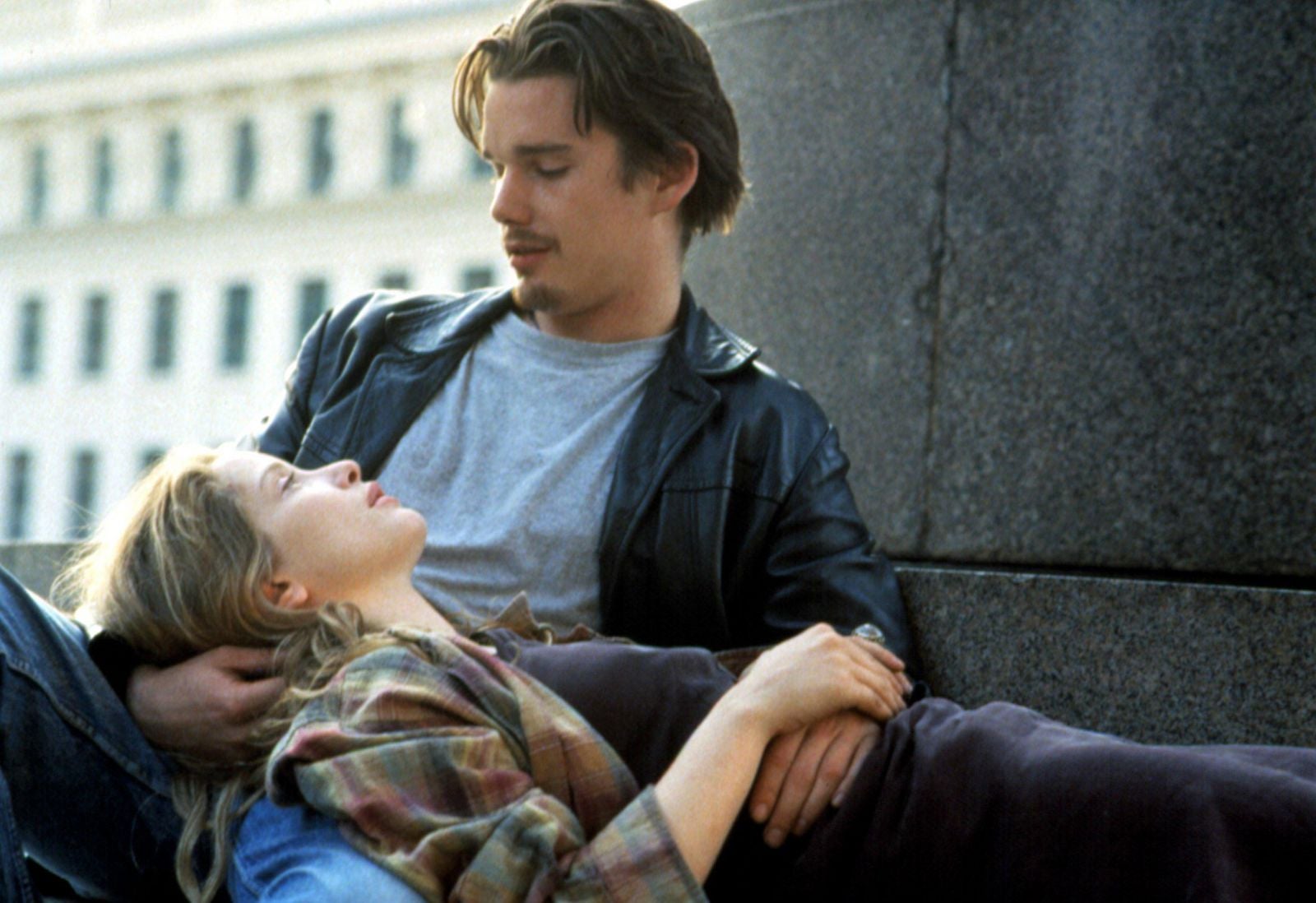 Delpy and Hawke in the first film, “Before Sunrise”.
Photograph: Everett Collection/Rex Features

While the ending of Before Sunset left some doubt over whether Jesse would return to his family or remain with Celine, Before Midnight sets the record straight. The new film begins, rather than ends, with someone catching a plane – though now it is Jesse’s teenage son who is flying back to the US. It’s a mild shock to see cool-cat Jesse now in the role of the worrywart father. But that’s nothing compared to the shot that follows him out of the departures terminal. Look away now if you don’t want to know the score: Céline is waiting for him in the car along with their dozing twin daughters. That graceful camera movement registers in one unbroken shot the momentous changes that have happened since Before Sunset faded out to the sound of Nina Simone’s “Just in Time” (“Just in time/ You’ve found me”).

I want to be careful about spoiling surprises that have been nine years coming but it is enough to say that Before Midnight is the flintiest entry in the trilogy. It is set on Greece’s southern Peloponnese peninsula, where the couple have been enjoying the hospitality of an elderly writer friend (played by the esteemed Free Cinema cinematographer Walter Lassally). The first thing that struck me about Céline and Jesse’s drive back to the town from the airport was that they seemed to have an awful lot to say to one another for a couple who have been together nine years. For all the delightful verbal ping-pong between them, a more authentic representation might have been relaxed or rueful silence.

The other minor problem is that for the first half of the movie, we have to share Céline and Jesse with so many other minor characters whose claim on our sympathies is more tenuous; this seems to run against the minimalist DNA of the series. But the final hour adheres so fully to the trilogy’s formula (two people talking) that minor deviations are soon being used for jarring effect. When Celine storms out of the room during an argument with Jesse, it’s as though a hole has been torn in the space-time continuum. You can’t storm out in a Before movie: it’s just not done! You at least have to be present, even if you’re not saying anything, don’t you?

I was going to suggest that no one should think about watching Before Midnight without seeing the first two films in this series. But it would merely be a different experience to join the trilogy at the end and work backwards. In this age of viewer-led content, it could function as a DIY cinematic equivalent to Merrily We Roll Along, running in reverse from the jaded to the joyful. Talk about the differences between then and now: I wouldn’t have written the phrase “viewer-led content” 18 years ago. I’m not entirely happy to have written it now.

But then each of the Before films serves as a marker in our own lives in a way that nothing else does except for Granada television’s Up documentaries (which began in 1963 with Seven Up!). Viewers who have stuck with the series will find it difficult to suppress a game of personal compare-and-contrast. That is not in itself specific to this series – you might very well do the same thing each time you see a new James Bond movie – but the synchronicity between that sensation and the themes of this trilogy is emotionally overwhelming. The cinema screen is always part mirror, and here the reflections are more vivid and unsparing than ever.

I was 23 when I saw Before Sunrise. I’d been writing professionally about cinema and music for just over a year. (One of my earliest jobs was to review a gig by a promising new band called Oasis. Whatever happened to them?) Before Sunrise was my first assignment as a lead critic on the now-defunct Premiere magazine. I took the review in to the office on a floppy disk, email being almost as exotic as silver-foil jumpsuits and meals in pill form.

In personal terms, Before Sunrise will always have an additional piercing resonance for me, since I watched it a month before I separated from the mother of my first two children. As for why we broke up – well, Jesse puts those things better than I ever could. (Strangely, I also saw Before Midnight shortly after the end of my most recent relationship. The lesson being, I suppose, that the Before movies are a terrible jinx, or that I am.) But if you were in the right place at the right time when you saw these films, then it is possible that they represent for you, as they do for me, something unique in cinema: a stroll down someone else’s memory lane that has striking intersections with your own.

“Before Midnight” is released on 21 June