At some point at the end of the week or beginning of the month, we all resolve to improve our fitness regime. For those who begin work early or have to commute, we endeavour to exercise in the morning so that the eight or ten hours we spend sat in front of computers don’t take their toll on our bodies. To endeavour is one thing, to execute is another. Exercise in the evening you say? When you reach home at 8pm and have things like laundry, cooking and tidying to do in the three hours before you have to sleep again this isn’t always possible. Sleep, for many, takes precedence over the aforementioned measures of self-improvement. This morning, I saw the journey from a different perspective – as it turns out, commuting can be quite an athletic act, requiring co-ordination of the mind, muscles and mobile phone clock. The following is based on my daily commute into London.

Reluctantly wake up at 6.45 am. You’re still a little sleep-deprived from the previous few weeks of work, and sleeping late last night doesn’t help. Have another 15 minutes in bed; you only need to leave the house at 8am.

It’s 7.30 – only half an hour to get dressed, eat breakfast and make a sandwich for lunch. Spring forth to the bathroom, grab your toothbrush and get brushing whilst simultaneously running the shower to eliminate the first 30 seconds of cold water (that would otherwise deliver a cruel slap to the face). Hop out and begin your warm-up – the “hot out of the shower dance” – a strange wriggle-walk triggered involuntarily by the horrific temperature change experienced on exiting the shower. Jump into your clothes (add a few extra minutes of indecision if you didn’t have them ready last night.) Oh dear, you still have “bed head” and only 17 minutes to eat and make lunch. Move it!

Sartorial solutions gained, time for “The Sandwich Sprint”. Grab bread and sandwich fillings from the fridge, slap both sides together and shove into a box. Stuff this in your bag/ dedicated lunch bag and run this to the front door, making sure you power off on the balls of your feet to avoid heel strike induced injuries. Right, breakfast … cereal again. Lunge towards the draining board and grab your bowl, decant cereal and milk. Don’t forget a quick sniff test before you’re unpleasantly surprised by a mouthful of sour milk and cereal. With just under a minute to spare from munching on breakfast, perform “The Breakfast Bowl Bleep Test.” Plonk your bowl next to the sink and run to the front door to catch to your lift the train station.  Don’t forget keys, wallet, train pass and “lovingly” prepared lunch.  Areas worked: soleus, gastrocnemius, quadriceps, core muscles.

You’ve just reached the station at 8.09am, the  train to London Paddington has just pulled in; you have 45 seconds to board it. Get ready for “Commuter Cardio and Calisthenics Part One” in 3-2-1… GO!

Quickly seek out the 10-inch gutter space on the left hand side of the corridor. Streamlining your profile is key; shoulders back, stomach in, all bags in front of you. Slip through the mass of professionals and school goers. Nimbly jog up two flights of stairs to the platform. Lean forward to eliminate bounce and keep on the balls of your feet for maximum speed and accuracy climbing each step. Triple Jump onto the train, and peer into the carriage to spot a window seat occupied by a “considerate” commuter’s handbags. Spotted one? Lucky you! Scurry down the narrow aisle, smile sweetly at the commuter. More often than not, they’ll wearily “bum-shuffle” inwards, giving you the aisle seat. Such is the power of non-verbal communication! Sit down with your back straight and pull in your stomach muscles, commuting does not condone bad posture. Use the 40 minute journey to replenish oxygen supplies and read some news. Areas worked: Quadriceps, pectorals, deltoids, core muscles. 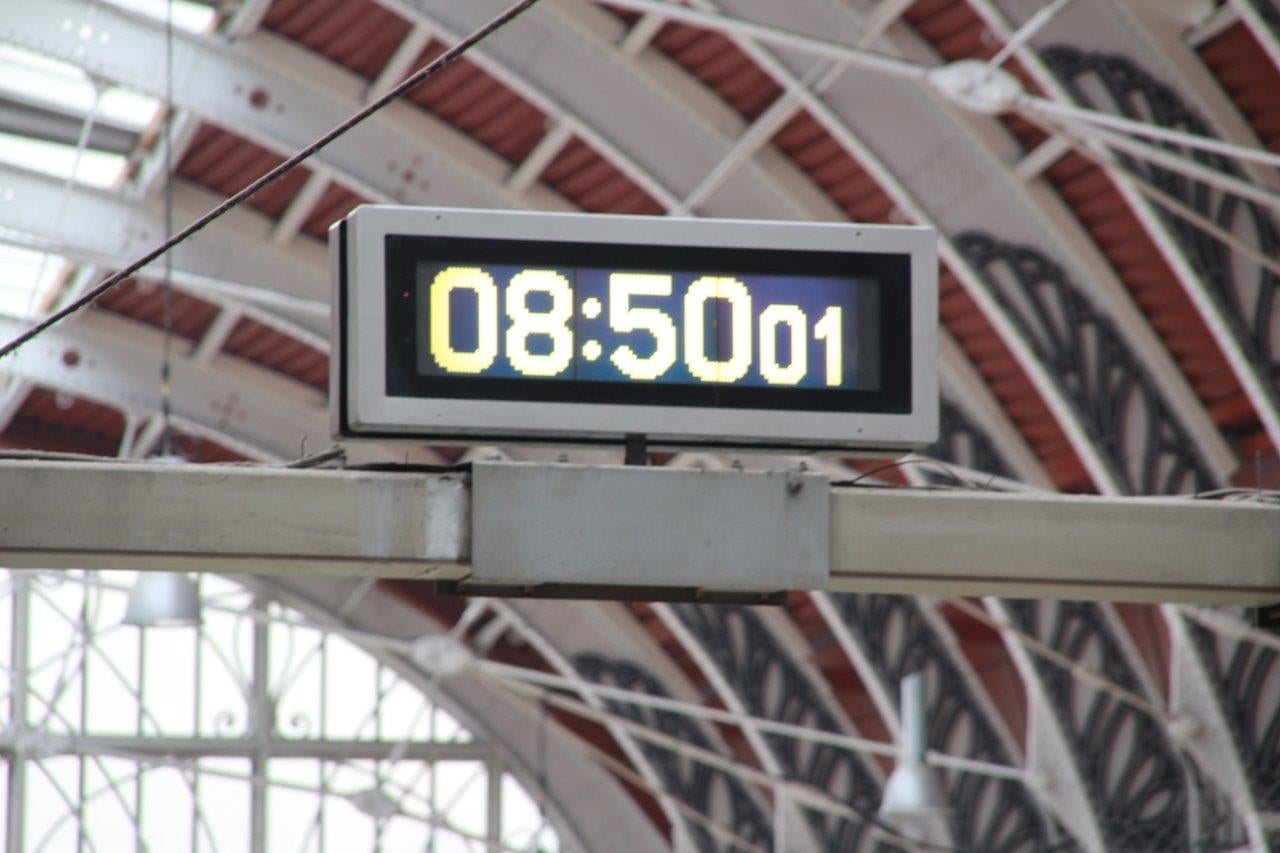 It’s now 8:50 and you’re at Paddington, caught in a mass of tired but wired commuters slurping the last of their morning beverages. Weave in and out of people to make it to the Bakerloo line’s ticket barriers in a manner similar to the Illinois Agility Test. There’s an added challenge, the people/cones are moving so proprioception is of paramount importance. Always look over your shoulder before changing direction, the last thing you want is to be knocked by a series of briefcase wielding wildebeests. Areas worked: Soleus, gastrocnemius, quadriceps, gluteus maximus. 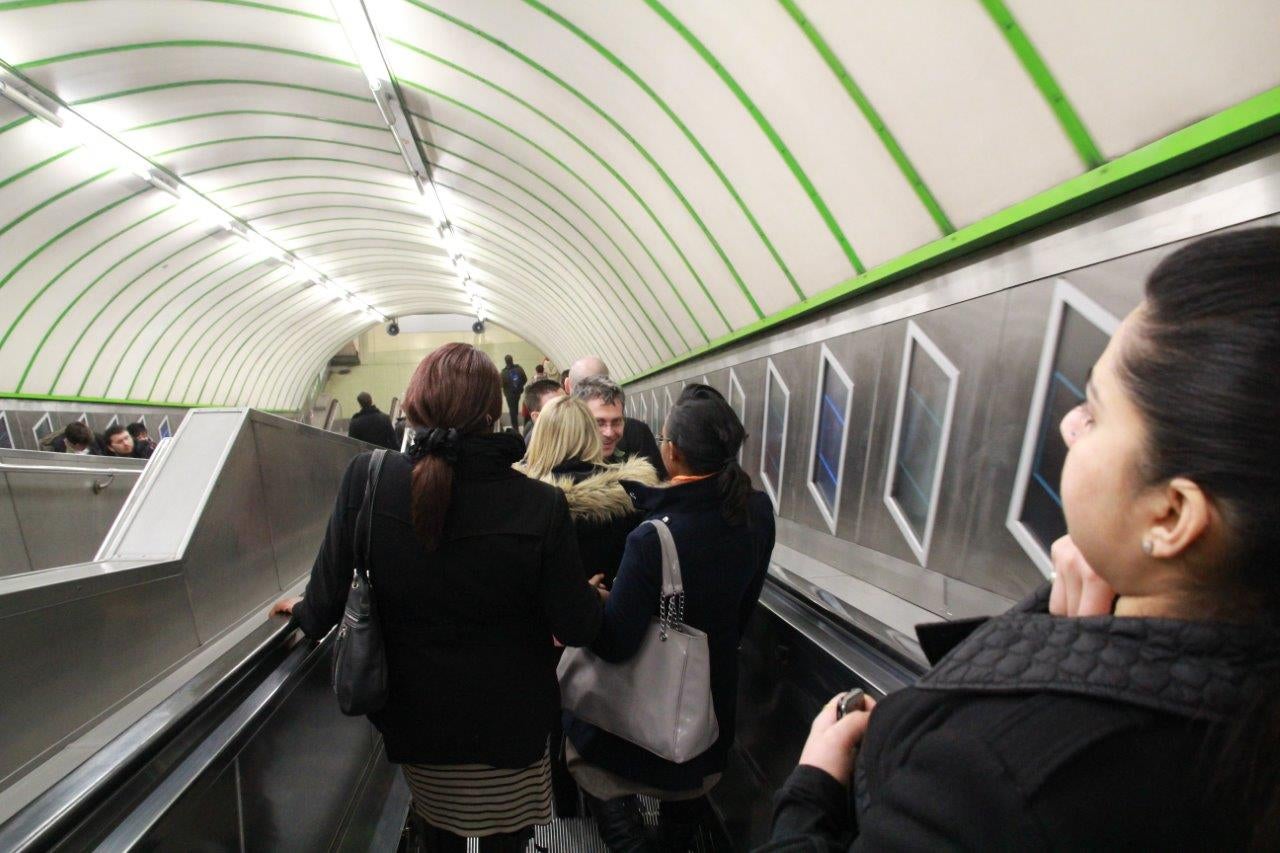 Descend the escalators, twisting your torso and keeping your knees bent to balance. Bags should be held close to the abdominals functioning as an elbow shield and as kettle bells. Keep close to the inner side of the platform to reach a less crowded square foot of platform. If unable to board the first train, angrily clench your “glutes” until the next tube arrives. Areas worked: Iliopsoas (used to lift your legs up and down), quadriceps, gluteus maximus, pectorals, deltoids, core muscles. 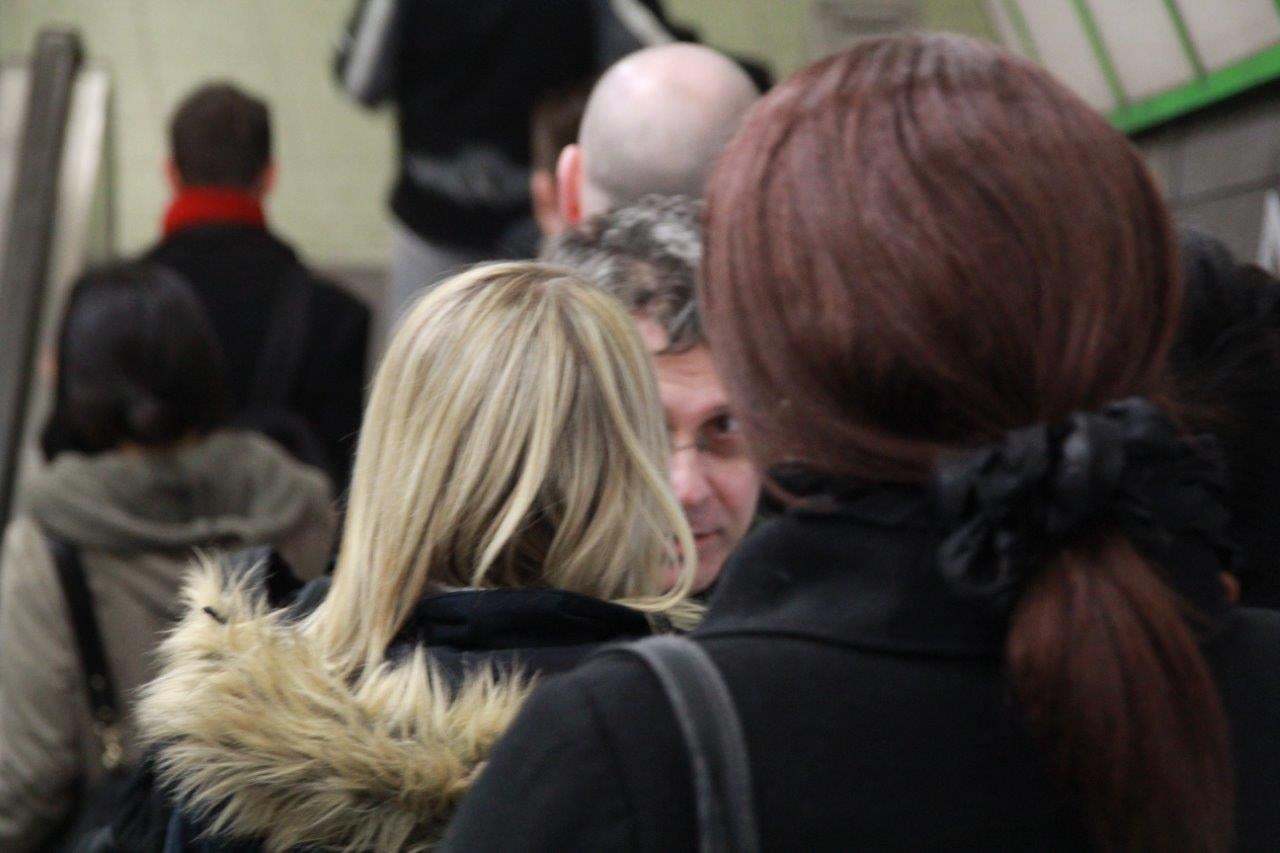 Now begins Commuter Calisthenics Part Two– “Tube Surfing”– testing one’s ability to overcome the incessant jerks and jolts courtesy of the tube driver. Squeeze onto the crowded carriage, face the doors and assume an L-shaped stance, feet hips-width apart. Keep your knees bent, core engaged, and arms forcibly pinned to your sides. To aid balance, focus on interchanges marked out on tube maps, or on more amusing things like protruding nose hairs if you’re stuck in the middle of the carriage, uncomfortably close to the next person. Areas worked: Core muscles, gluteus maximus, gluteus minimus, quadriceps.

Twenty minutes of simulated surfing later, it’s time to change tube lines and perform a super set of lunges and kettle bell training- “Line Change Lunges!” Ascend the escalator and single flight of stairs, lean forward and use your bags as kettle bells. Don’t forget to deeply inhale plenty of stagnant tunnel air with every second stride or you may end up with a stitch! Board and prepare for round two of “Tube Surfing”– this train delivers Richter-Scale worthy rattles whilst leaving and pulling into stations, and occasionally moves in the opposite direction. “Please mind the gap between the train and the platform” as you leap off and weave your way to the exit. 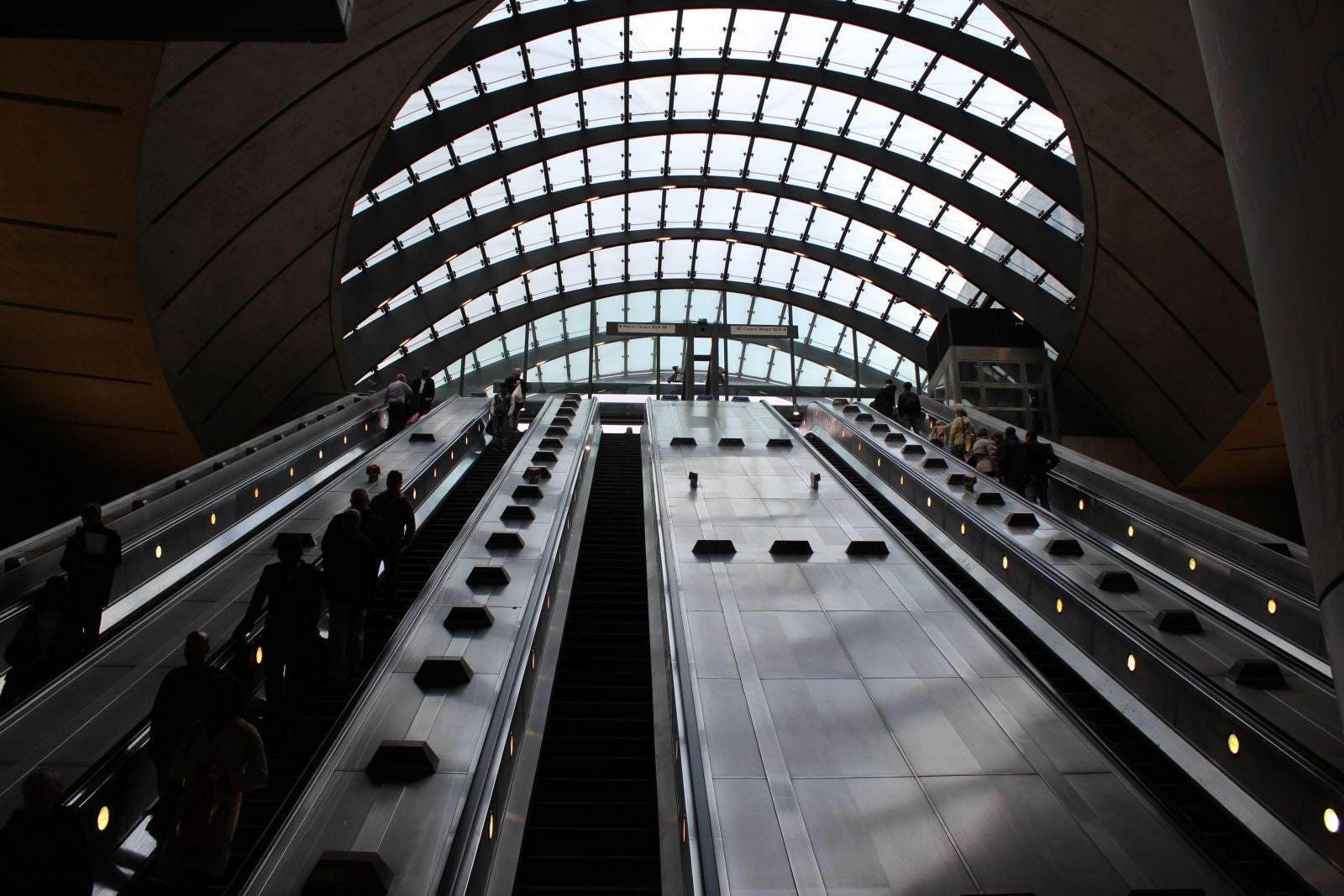 Exit in sight, begin “Light-at-the-end-of-the-tunnel Lunges.” Scale two or three steps at a time as you climb three flights of stairs to the exit. Allow your glutes, calves, and quads the full range of motion to ensure a consistent rhythm till you reach the top. Areas worked: Quadriceps, gluteus maximus, soleus and gastrocnemius, core muscles, pectorals, biceps. 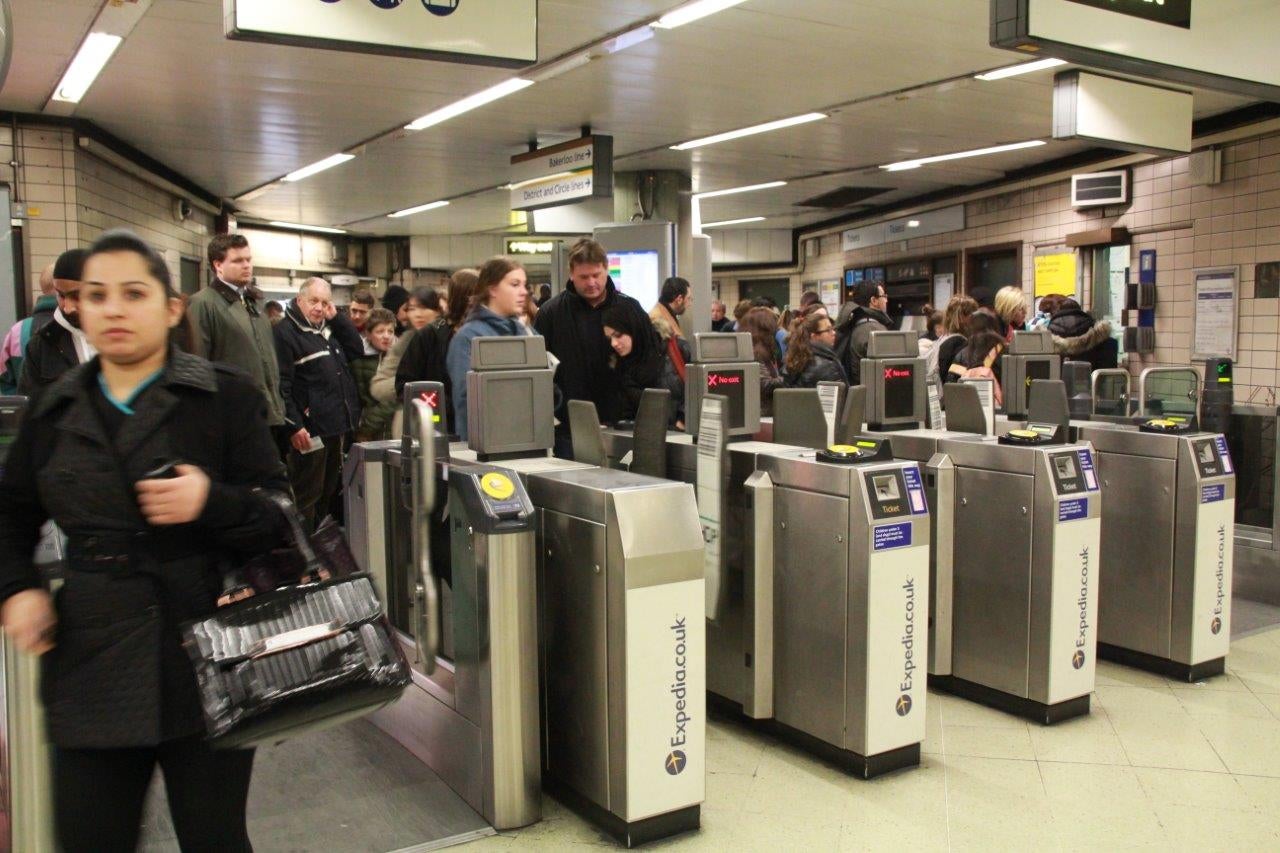 Pass through the ticket barriers. If someone cuts in front of you, add an extra three glute clenches, and head towards the subway to begin “Commuter’s Cool Down”. Descend the stairs, keeping each step light. Mind the tramp poo on the bottom two steps! Briskly walk through the dank corridor and head upstairs on the balls of your feet. Ignore the inefficiently bouncing gait of the commuter in front .Good form is essential. Keep your swipe card handy as you purposefully stride towards the office building. Pass through the corridor and into the lift. Check your hair, straighten your trousers and take some deep breaths.

Arrive at your desk having burnt about 150- 200 calories in a total body work-out during your hour long commute. Plough through your day with boosted circulation and prepare for round two at 6.10pm

The images featured in this article are part of a photographic project on the theme of commuting.