Let’s try a thought experiment. Think back, for a moment, to something you wrote 20 years ago. Perhaps you were a wee young thing scribbling esoteric tales of dragons on the back of some left-over Christmas wrapping paper. Perhaps you were a precocious university student handing in a dissertation. Perhaps you were a novelist, or a journalist, or an avid letter-writer. Perhaps you merely kept diary. Whatever it is, look hard at the page. Capture it in your mind. At best you’re pleased, even tickled by the feather of nostalgia. At worst you wince with embarrassment. The piece of writing has become a time capsule. You are peering down a microscope at your former self. Do you like what you see?

Twenty years ago, Grayson Perry wrote A Cycle of Violence, a graphic novella set in 2023 that has since acquired semi-cult status and which tells the story of a champion cyclist’s decent into moral depravity. The protagonist, Bradley Gaines, is a kind-hearted, multi-Tour de France winning celebrity who succumbs to his “inner demons”, repressed childhood memories that return to haunt him at the height of his success. These demons take the physical shape of Bradley’s abusive mother, who hovers above him like a sadistic ghost tormenting him with insults. “You will not be rid of me through your anger,” she screeches. “I feed on your anger, because I am part of you.”

Bradley’s no match for unaddressed mummy-issues and soon falls victim to the darker side of his nature, giving up cycling and hurtling head-first into a rampage of sexually-motivated violence. He takes to picking up chicks in his mega-fly human-powered hot rod before taking them home, tying them up and macerating them with his manhood. Such liaisons often end, unsurprisingly, in tragedy.

Originally privately published in a batch of only 300, the 2012 re-issue is the first trade edition of the book. But why go back to it now? Why invite the scrutiny? Many artists might prefer to keep work produced in an experimental, pre-success era locked away in the closet of history – but not Perry. I suppose we shouldn’t be that surprised. This is, after all, the artist fondly known as “the cross-dressing potter”, who has publicly confessed his sexual fantasies (which include transvestitism and humiliation), who has a tendency of naming his ceramic vases things like “Saint Claire 37 wanks across Northern Spain”.

Re-reading, and indeed re-publishing, a piece of work certainly makes for fascinating introspection. The Turner Prize-winning artist professes that at the time of writing things in his life were tough. “In 1992 I had just become a father and was coping with the stresses of caring for a newborn,” he writes in the introduction. “I had left art college a decade before and my career had not yet taken off. I was horribly insecure and, maybe, a touch bitter. I was certainly less self reflective, I expressed myself with little impulse control.”

The physicality of parenting relationships reignites very primal somatic memories. Looking after a child cannot help but take us back to our own childhood. Again and again I feel I am, like many artists, lashed to a wheel that forces me to constantly recycle my biography, each version coloured a little differently.

It’s very easy to read the novella as exactly that – a fantastical rehashing of the artist’s own history. Born and raised in Essex, Perry’s childhood was marred by his mother’s affair with the milkman and his father’s subsequent abandonment of the family. The milkman, who eventually became Perry’s stepfather, was often violent. As a teenager he went to live with his real father. He also began compulsively cross-dressing. Upon his stepmother’s discovery of this “addiction”, Grayson was sent back to live with his mother and chaotic stepfather.

Armed with this knowledge, the childhood of Bradley Gaines becomes a funhouse mirror – distorting Perry’s own reality to theatrical heights. Bradley’s mother is a “vain woman” who gives birth to Bradley in a pair of stilettos and is fond of referring to him as a “mistake”. Bradley’s father is a gentle, woolly jumper-wearing  car mechanic fond of “wholesome snacks”. One day his mother meets Gary, a high-octane motor head with great hair, and soon Mother files for divorce from Father on the grounds he is “bloody boring” and “a complete fucking wimp.”

Young Bradley is thrust into a parallel childhood universe from hell that revolves around watching his mother and stepfather wanking each other off, getting slapped for throwing up in Gary’s awesome car, and being called a “pathetic pouf” whenever he cries. Mother even puts him in a dress as punishment for acting like such a “girl” about life. As readers, we soon come to realise that at the root of Bradley’s future “psycho-sexual” transgressions is a childhood spent deploring all things feminine – from his own mother to the girlishness inside him that he is forced to condemn. As a full-grown “real man”, Bradley’s cock becomes the singular proof that he is not a woman. It also becomes his weapon for attacking the feminine aura he finds so alluring, and ultimately so unacceptable.

One of the most interesting things about Grayson Perry is his long-professed love of therapy. Throughout the years he’s extolled the virtue of the practice, citing his six years of treatment as the “flowering” of his artistic practice, even jokily remarking that it may have been what won him the Turner prize in 2003. He’s married to a psychotherapist, Philippa, and has called therapy “a clear eyed way of the looking at the world”, and often discusses his work with respect to a pre/post therapy division. “In my art pre-therapy, I was leaking madly about my issues,” he told the Guardian last March. “Now I do it with awareness.” A Cycle of Violence, as noted in the introduction, is a typically pre-therapy piece:

I gave this little book to my therapist in the first few weeks of our work together. Maybe I thought it would be a helpful window into my mind.

It might be easy, then, to dismiss this book as a sexed up exercise in self-reflection. Indeed, in many ways it is so ludicrous that it almost loses credibility. Even the author struggles with some of the more brutal pages: “It is the sadomasochistic content of cycle of violence that leaves me feeling uncomfortable today,” he writes. “Re-reading the work I feel now like a boring social worker visiting a family problem.”

But to dismiss it as entirely Freudian drivel would be a mistake. From the sticky recesses of these lurid pages, something authentic emerges as Perry’s little book begins to tackle genuine issues of sexual identity. Beneath all the blood and bicycles and nipple clamps, there is substance here.

The most important question the book asks is: Where does our sexual identity come from? Sex is everywhere in Bradley’s world. His own derangement is played out in a brilliantly witty visual landscape. From phallic shaped bicycles seats to aprons adored with vulvas, Bradley’s sexual mania is a claustrophobic reality that closes tighter and tighter like a kinky fist. Sexuality is an exaggerated, ominous force. Bradley’s penis is an over-sized truncheon. Similarly, the vagina is an angry orifice, drawn as a yawning chasm of despair waiting to gnaw at pleasure like a set of rabid molars. Sex is no safety net but rather a brutal game of gender politics. Love scenes take on the appearance of a duel, two exaggerated genitalia battling for dominance.

Cycle of Violence can be read as an examination of sexual archetypes. Women come in two varieties: big busted and nurturing, or lusty and manipulative. Men are either weak victims or well-hung winners. Within the pre-established fantasy world of the novel we can dismiss Perry’s characters as absurd. But in the real world, such archetypes haunt us in much more subtle forms. I doubt there are many who do not feel the tension between “masculine energy” and “feminine energy” raging inside them. Is it any wonder that Bradley ends up so imbalanced? Is it any wonder we’re all so confused? For a more nuanced exploration of these ideas, you could read Jung’s didactic of the anima and the animus (in which he describes the “fundamentally unconscious” gender counterpart that exists within each of us). But Perry’s rather un-nuanced investigation of the sexual dialogue is, in a way, equally compelling. It uncovers the truth we’d find peering into our own mind if all the self-censoring were removed.

In the end, it’s therapeutic intervention that comes to Bradley’s rescue. With the help of an experimental unit for the psycho-sexually disturbed and a nudist healer named Rufus, our hero faces up to his “many painful and deeply scaring memories” and accepts his inherent male-female duality. “You mean I can be a cry baby sissy?” Bradley asks tearfully during an around-the-campfire feelings sharing session. “Hell yes,” replies Rufus. “But remember you’re a man whose crying Brad, so that makes crying manly.”

A Cycle of Violence is disturbing, offensive, poignant, wholly original and very, very weird. But ultimately, it is unashamedly honest, and this makes it very brave. Not often do we see sexual identity discussed in all its messy, confused, candid glory – even less often do we see it dredged from the past in a public way by an artist at the very height of his career. If I were Grayson Perry, I’d look back on this one proudly. And maybe wince a little, too.

A Cycle of Violence by Grayson Perry is released by Atlas Press. 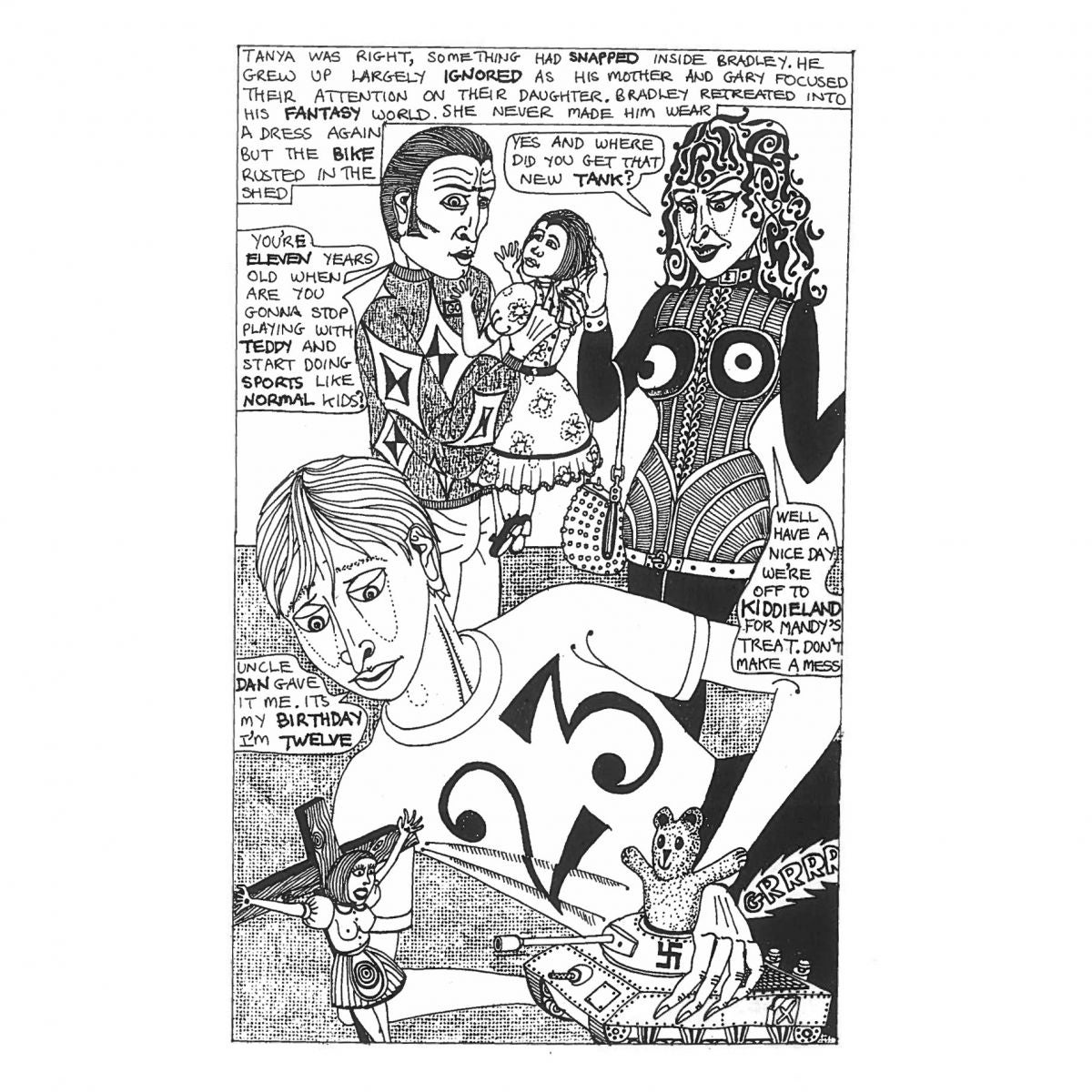 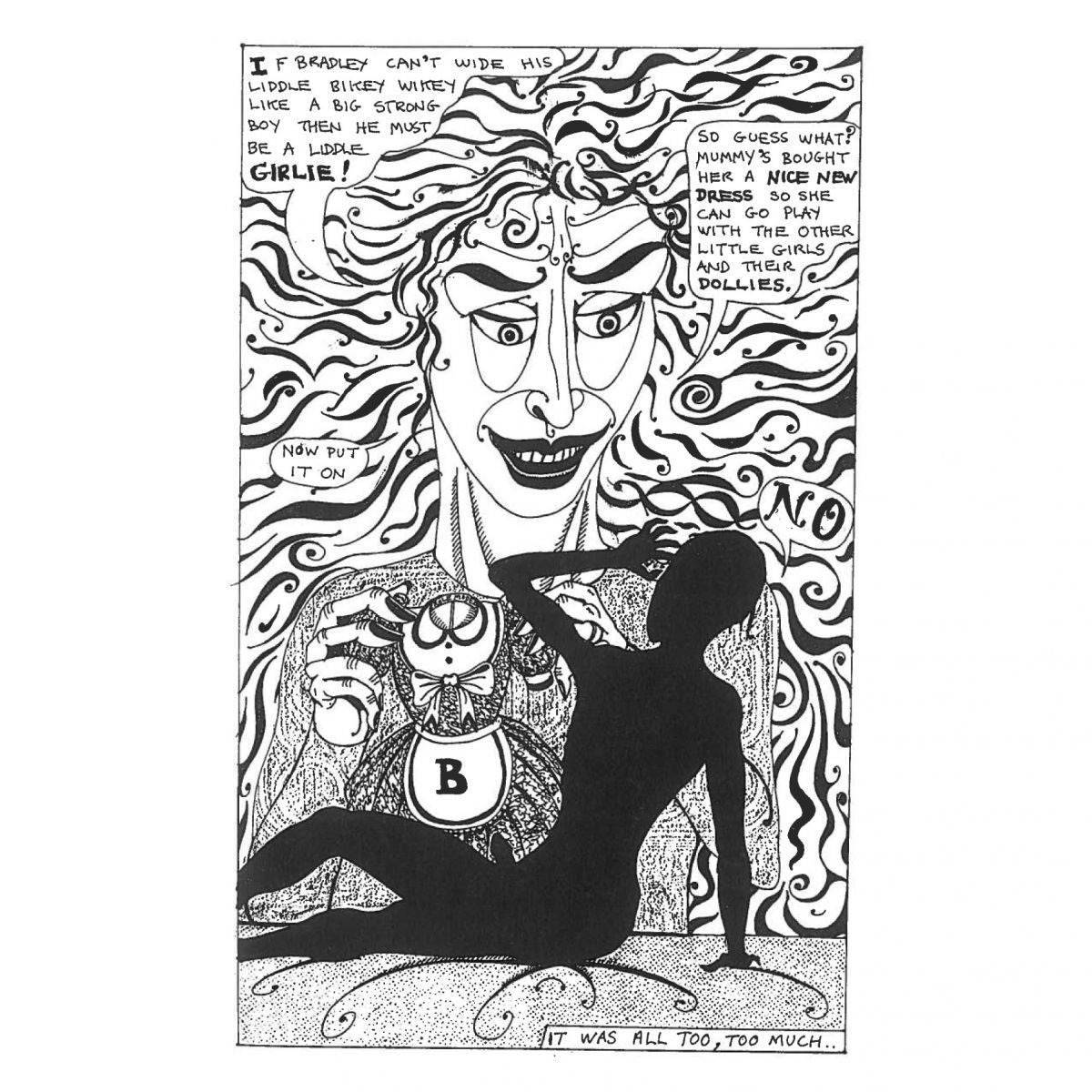