In the autumn of 2018 Petro Poroshenko, then president of Ukraine, announced a milestone for his country, “a meaningful step in the same category as expressing our desire to join the EU and Nato”. The historic moment was the recognition of the Ukrainian Orthodox Church as a distinct religious community, separate from the Russian Church — “autocephaly”, as it is known. The decision in 2019, by the Ecumenical Patriarchate of Constantinople, the authorities of the Eastern Orthodox world, endowed the Metropolitan of the Ukrainian Church in Kyiv as the highest spiritual authority for Orthodox Ukrainians. Three years later, Ukraine’s Orthodox Church remains separate from Russia’s, but Ukraine’s existence as an independent country hangs in the balance.

That autocephaly was understood as a radical change offers an important insight into the role religion played in the lead-up to the war and continues to play now. In recognising autocephaly in 2019, Orthodox authorities, unwittingly or not, bolstered Ukraine’s claims to sovereignty in both sacred and secular politics. The destruction wrought by the Russian invasion has the potential to do the same.

Far from making the case for a just war, Russia’s mobilisation of Orthodoxy and statements by the head of the Russian Orthodox Church, Patriarch Kirill, in support of military action have only undermined Russia’s spiritual authority in the Orthodox world it insists it is defending. In one sermon delivered shortly after the war began, Kirill justified the invasion as necessary to defend Russia and Ukraine’s shared Orthodox civilisation. He pointed to recent LGBT pride events in Ukraine as evidence that Ukrainians needed Russian protection from “corrupting” influences. In April Kirill lent credence to Vladimir Putin’s false justification for the war, claiming in a sermon that Russia was fighting fascism in Ukraine just as it had in the Second World War. Although Kirill has long been considered a Putin ally, these statements feel unprecedented in their justification of violence towards those the patriarch claims to consider part of his spiritual flock.

Both Russia and Ukraine have many Christian traditions, but it has been each country’s Eastern-Rite Catholic churches that have usually been most political. Historically, the case for Ukraine’s sovereignty has been both defended and denied inside its contested churches. For Ukraine, this means asserting that its spiritual landscape, anchored by the distinct traditions of Eastern-Rite Catholicism and Orthodoxy, serves as a foundation for an independent state and nation. For Russia, paramount is the idea that while Ukraine and Russia are separated by internationally recognised borders, the unity created by their shared Orthodox tradition justifies the Kremlin’s assertion that they are a single nation, and that this unity must be defended at all costs.

Missing presents and parcels in bins: why are private delivery firms so terrible? 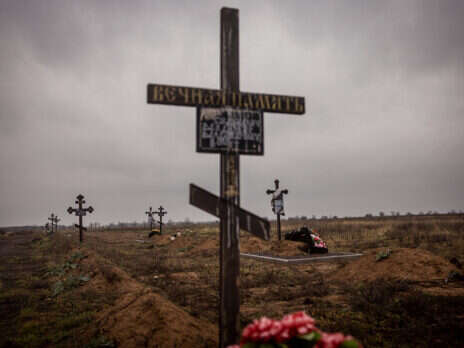 [See also: Risk of a direct confrontation between Russia and the West is rising]

Central to Russia’s vision is the concept of the Russkiy Mir, or Russian World. An idea that has strayed far from its roots in religious texts as a conception of Orthodox community, the Russian World has come to encompass a new vision of Russian empire in the 21st century. Territories that have historically been home to Russian Orthodox churches and the Russian language are now considered part of the Russian World, whose borders exceed that of imperial Russia at its height. Putin’s Russia has declared itself the bearer of the burden of this empire, leading it and holding it together. Under Putin, the Russian Orthodox Church has served as a willing partner in this endeavour, hearkening back to its role as an instrument of empire under the Tsars and later under Stalin, who used the church to make territorial claims despite the USSR’s official atheism.

At key moments in Ukraine’s history, meanwhile, believers have voted with their feet in reaction to the politics of the Russian Orthodox Church. In 19th-century Ukraine activists encouraged parishioners to attend churches whose priests defied the imperial politics of the Russian church and instead embraced the new Ukrainian national movement. At the start of the 20th century, when the early USSR had a more flexible policy towards religion, believers weighed the ramifications of attending churches that did or did not have the backing of the Soviet state. When the Ukrainian Orthodox Church was recognised as autocephalous many Ukrainians flocked to it.

This willingness to abandon a church over politics is not as widespread as we might expect, however. For every parishioner attuned to their priest’s institutional affiliation, there is one whose feelings towards their church remain independent of public statements by hierarchs or partnerships with politicians. This was as true historically as it is today. To take one example, in the aftermath of the Second World War, when the Soviet Union annexed eastern Poland to Soviet Ukraine, the Eastern-Rite Ukrainian Catholic Church to which most locals belonged was destroyed and replaced by the Soviet-backed Russian Orthodox Church.

When Ukrainians continued to attend their local churches, which had newly been consecrated as Russian Orthodox, Soviet authorities took this to mean that these believers accepted Soviet power and Russian Orthodoxy. Many Ukrainians saw things differently. The priests and sacred spaces had served their parishioners long before their official affiliation was changed. In fact, as we can tell from archives, many Ukrainians saw their sacred practices as resistance against Soviet power, despite state affiliation.

After the recognition of an autocephalous Ukrainian Church in 2019, a significant percentage of Ukrainians continued to attend churches affiliated with the Russian Orthodox Church based in Moscow. But like western Ukrainians in Soviet times, this allegiance often had little to do with Moscow and much more to do with local religious life. There were also some Orthodox believers who, before the war, attended Moscow-affiliated churches as an intentional decision. They saw the Russkiy Mir as something they wanted to be a part of, an alternative sense of belonging to the one being offered by the Ukrainian religious authorities and the government in Kyiv.

What does a brutal military occupation justified by Orthodox hierarchs do to this approach to religious practice? Orthodox believers around the world are cutting ties with the Moscow-based Church in protest against its support for the invasion of Ukraine. Even for those who previously paid little attention to Kirill’s pronouncements or Kremlin intrigues, this war has been a step too far. If Putin miscalculated in assuming that many Ukrainians would greet Russian troops as liberators, it seems that Kirill and some of his fellow clergymen did, too. The war that they supported to restore the unity of the Orthodox world has managed to introduce new fault lines.

Today a search for “Russkiy Mir” on social media brings up images of the destruction wrought by the Russian invasion. Photos of bombed out buildings, dead bodies and hospitals are tagged. The message is clear: if this is the Russian World, we don’t want in.

[See also: Ukraine is haunted by the ghosts of past wars]

Newsletters from the New Statesman View all newsletters
Subscribe for the best of our politics, international affairs, culture and business coverage, straight to your inbox
THANK YOU
Topics in this article: orthodox church, religion, Vladimir Putin

Kathryn David is an assistant professor of Russian and East European Studies at Vanderbilt University. Her research focuses on religion, nationalism, and empire in Soviet Ukraine and Russia.