Geopolitics is often likened to a game of chess. So while the 15 November meeting between Joe Biden and Xi Jinping at the G20 Summit in Bali seemed diplomatically reassuring, it’s still true that recent US sanctions have put China in check (though not checkmate). Semiconductor export controls, introduced by the US president on 17 October, will severely impede China’s semiconductor industry, which President Xi has been determined to make self-sufficient. The collateral damage will spread to all the high- to mid-range technologies underpinned by semiconductors, including AI, supercomputing, data centres, autonomous driving, hypersonic missiles and much more. Yet China’s response is likely to include much more defence than attack.

The sanctions focus on human capital (effectively forcing American employees in Chinese firms to resign) and capital goods (preventing the export of semiconductors or the equipment used to make them). Therefore, China has no choice but to invest even more in research and development (R&D) to encourage innovation and create incentives for domestic and international high-skilled workers to come and work in its chip sector.

In 2020 China attracted more than 100 employees of TSMC, the world-leading Taiwanese semiconductor company, to work in mainland China and made a big recruitment drive for South Korean engineers. One advert even said it would give “preferential treatment to former engineers of Samsung Electronics and SK Hynix”, South Korean chip makers. Expect to see Chinese companies racing to acquire semiconductor companies abroad. Meanwhile, the US, via Gina Raimondo, the commerce secretary, will continue its efforts to persuade South Korea, Taiwan, Israel and others to join its export control agenda, and attempt to limit foreign-based engineers moving to the Chinese semiconductor industry.

Driving innovation will be more difficult for China. Shenzhen and Shanghai, two important tech hubs, have doubled down on incentives and subsidies for companies in high-tech industries. One of China’s plans will be to invest heavily in new semiconductor materials and advanced packaging to circumvent US chip sanctions. China will probably increase its R&D expenditure to match that of the US – China invested 2.4 per cent of its GDP in R&D in 2020, whereas the US figure was 3.5 per cent. However, cross-country collaboration boosts R&D, and with the world looking more sceptically at China, it may struggle to get the same returns on its investments. 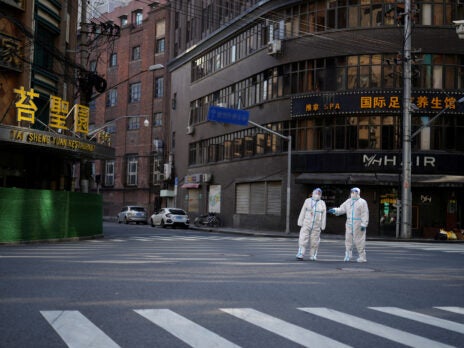 China will increase its efforts to produce national tech champions and ensure it is not dependent on overseas technologies while pursuing a diplomatic advance with richer countries to cast itself in a better light. Investment-starved Europe is a good place to start. Olaf Scholz, the German chancellor, visited Beijing on 4 November and Emmanuel Macron, the French president, is expected to make a similar trip later this month. Macron has said that the EU must not “join together against China” as this would be “counterproductive”. Where the US sees itself on the right side of a Manichean struggle against China, Macron – and the EU more generally – takes a more nuanced view, calling China a “partner, competitor and systemic rival”. Grim economic realities in Europe will reaffirm a more pragmatic approach to Sino-EU relations. Over the coming years, Beijing will gladly welcome many European leaders on official visits.

In terms of a retaliatory attack, China has options but is likely to decide to use them at a later point. Regarding sanctioning US technology, China is in a strong position in many sub-sectors. For example, China has consolidated a lead in the mining and refining of rare earth elements and battery raw materials. These materials are used in digital products and green technology. According to Benchmark Mineral Intelligence, China controls 80 per cent of battery raw material refining, 77 per cent of battery production, and 60 per cent of component production. Furthermore, China has around 80 per cent of the global market share in solar cell manufacturing. Yet it would be a strategic miscalculation to weaponise this monopoly now, as these technologies will inevitably grow in importance over the coming decade.

Another avenue for retaliation comes from active pharmaceutical ingredients (APIs). A report from the US-China Economic and Security Review Commission, set up by Washington, found that the US imported “80 per cent of its APIs from overseas, and a substantial portion of US generic drug imports come either directly from China or from third countries like India that use APIs sourced from China”. However, China receives generous investment (and subsequently data) from US pharma companies.

Given these clear choke-points, China may want to demonstrate its potential strength without exerting it. One of the ways to do this would be through China’s own version of the US Entity List, America’s chosen tool for stopping US tech being imported into China. A Chinese Entity List would restrict the US’s access to Chinese exports unless the exporter was granted a license. This would give the Chinese Communist Party the discretion to limit these licenses or grant all of them.

US commentators have mused whether China would block or restrict market access to China-reliant US companies such as Tesla and Apple. However, China relies on US companies’ investment, technology, intellectual property and knowledge transfer, all of which help China to move up technology value chains. Instead of being dominant in raw materials or APIs, China aims to be dominant in the more profitable products downstream. Is it any wonder that Tesla recently received a tax break in mainland China? During the 20th Communist Party Congress in October, Xi even committed to policies to open up the economy and welcome foreign investors.

In the US-China tech war, China has made enormous progress, which has prompted the US to try to kneecap China’s high-tech sector. The dual circulation policy, whereby China moves to become tech self-sufficient, was put in place to ensure the country became immune to the weaponisation of technology (which itself signals that Beijing recognises its inferior position relative to the US).

But China is not there yet, and the US has indeed just weaponised technology. The sanctions will probably disrupt China’s high-tech sector for the next two to five years and will accelerate and justify the dual circulation policy. For the US, these sanctions represent a bet: that China will not be able to innovate its way past the US in the high-tech sector without implicit reliance on US intellectual property, technology and imports. It’s unclear whether it will pay off.

[See also: The future world order will be decided by the war over semiconductors]