Several world leaders have been praised for their handling of the Covid-19 pandemic: Germany’s Angela Merkel, Taiwan‘s Tsai Ing-wen and South Korea‘s Moon Jae-in, for example. But none has been as lavishly lauded as New Zealand’s Jacinda Ardern. Her government quickly imposed a severe lockdown after case numbers started rising. Combined with excellent communication from officials and Ardern herself, this produced a rapid fall in the infection rate in New Zealand and has kept it low since, notwithstanding a small resurgence in Auckland recently. The country has suffered just 25 deaths from the pandemic.

A 40-year-old social democrat whose former jobs included working in a fish-and-chip shop and in the UK Cabinet Office during Tony Blair’s premiership, Ardern has been described as the “anti-Trump” and a “global progressive icon”. She has featured on the covers of British Vogue and Time. Next Tuesday (20 October) sees the publication of a new book by the New Zealand writer Madeleine Chapman: The Most Powerful Woman in the World: How Jacinda Ardern Exemplifies Progressive Leadership. It comes with an endorsement from no less an authority than Oprah Winfrey, who urges us “to make the choice every single day to channel our own inner Jacindas”.

[see also: Johnson talks while Ardern acts, ads in the air, and the FT’s media hacker]

Amid all the Jacinda-mania it is hardly surprising that the general election in New Zealand on Saturday 17 October is expected to produce a landslide for her Labour Party. It may give the party the chance to form the country’s first majority government since its shift in 1996 from a first-past-the-post system (like those used in the UK and US) to a mixed-member proportional system (like that used in Germany) designed to produce coalitions. Recent polls put the proportion of polled New Zealanders who want her returned as prime minister at or above half, over double the proportion who want her replaced by Judith “Crusher” Collins, her tough challenger from the conservative New Zealand National Party. 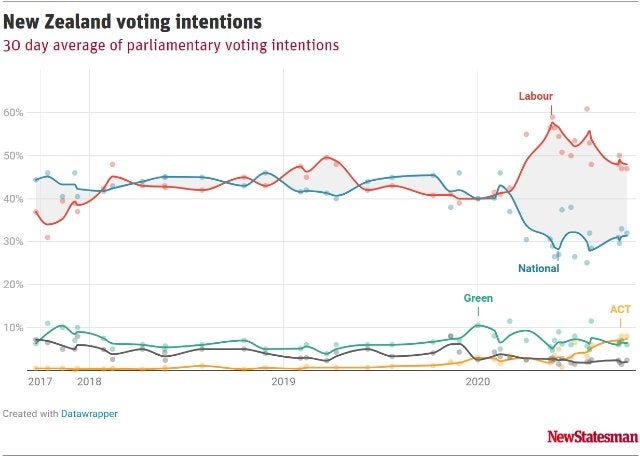 Ardern’s rise to global icon status has been stratospheric. She only won her first constituency election in February 2017 (having sat as a list MP since 2008), then became Labour’s deputy leader that March, leader of the opposition that August and prime minister that October at the helm of a coalition of Labour and the small, nationalist New Zealand First party.

Three moments have forged her international profile. In 2018 Ardern became the second ever elected world leader, after Pakistan’s Benazir Bhutto in 1990, to give birth while in office; she then brought her three-month-old to that year’s UN General Assembly. In March 2019, her response to the Christchurch mosque shootings was a model of unifying compassion and determination. And this year her knack for crisis management has triumphed again as her deft communication (hosting Facebook Live events from her sofa during the lockdown, for example) helped secure buy-in for her government’s lockdown measures, which are praised for their “unprecedented” speed and intensity by an article published on 13 October in the Lancet medical journal.

Yet the domestic picture is more complicated than that international viewpoint would suggest. When she took office three years ago, Ardern pledged to take on problems like poverty and unaffordable housing, which she argued had been neglected during the preceding nine years of National Party government. Progress has been distinctly patchy. The house price-to-income ratio has risen from 6-1 to over 7-1 and a house building programme has been a flop; Unicef puts child welfare in New Zealand at 35th out of 41 rich countries; the country’s relatively high child poverty level is little changed. It seems hard to believe it now, but before the pandemic struck it even looked possible that Ardern would be a one-term prime minister.

It is only fair to note that three years is not a long time and, as Ardern pointed out in a TV debate with Collins on 22 September, seven out of nine measures of child poverty have now turned in the right direction. But it is also fair to describe Ardern’s domestic reform agenda as, at best, incomplete. The prime minister acknowledges as much herself. “Am I finished? Absolutely not” she said of child poverty in the TV debate. At a rally in Wellington on 11 October she set 2030 as the horizon for her reform programme; the date by which to halve child poverty, achieve 100 per cent renewable energy and eradicate waiting times for state housing.

Does she intend to remain prime minister until then? Ardern brushed the question aside when it was put to her: first the election, and the formation of the next government. A big question will be whether, if Labour can govern alone, it will do so or instead opt to take the majority position in a coalition with the Greens. And then, who knows? Given her current global stature it is surely only a matter of time until a big international job comes calling. Might Ardern succeed in becoming the first woman to be secretary-general of the UN, where her predecessor and mentor Helen Clark was unsuccessful?

Perhaps. But first, she should use the momentum of a landslide win on Saturday to set New Zealand firmly on the right course. If she can put the generous and unifying leadership for which she is internationally recognised at the service of the country’s bread-and-butter priorities, New Zealand has the potential to be a global beacon in the coming decades. In an age of remote working, digitised services and pandemics, the country’s isolated location can become a boon. In an age of Green New Deal economics it can become a leader in decarbonisation. In an age in which the balance of global power will be decided in the Indo-Pacific, it can play an outsized geopolitical role. Ardern is an internationally admired example. If she gets the coming years right New Zealand can become one, too.

[see also: The rise of the Indo-Pacific]